Why the Coronavirus Scare Now?

The Calm Before The Elevation Of Collective Consciousness 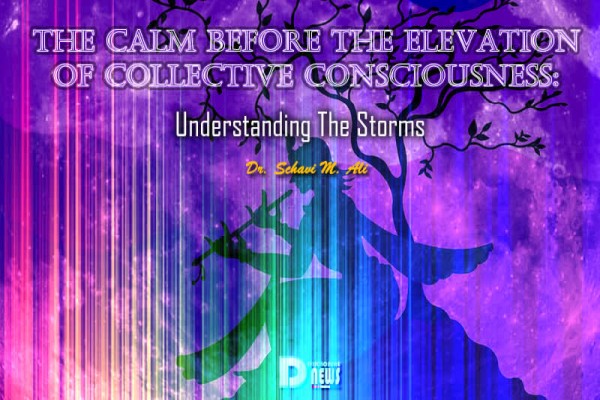 Most people are familiar with the phrase “the calm before the storm” which implies that just prior to a major event, there is a strange quietude.

For example, just before a tornado, usually the atmosphere is very quiet; no animals scamper about; trees seem to stand very still; and there is a yellow-like cast in the sky.

Then suddenly noise like a train racing down a track is heard—the dark wide tornado cloud is now seen soaring along the sky with walloping winds, picking up buildings and cars and throwing debris.

Also, just before a thunderstorm, there is quietude, and then there is the sound of rumbling thunder, and lightening and rain usually follow.

In like manner, the low readings on technological equipment which registers the frequency and amplitude of Earth/Gaia as “She” receives transmissions from solar energetics as well as the total black-outs on the devices are indicative of a relative calming situation at the “3d” level while behind the material scenes are powerful spiritual dynamics at work which are preparations for an eventual elevation of creation to heights of collective consciousness that will be amazingly awakening and providing choices to be made.

Most people have been waiting for a long while for a re-setting of, for instance, global financial conditions, for the unfolding of truths in the medical arena, for political stabilization, for clarity in historical data, for religious fantasy to be unveiled so that spiritual reality can be realized.

Much more than these issues are awaiting rectification on the planetary surface.

There are those who speak of a profound solar flash that is imminent which will finally alter the current time/line and change all that is disharmonious to harmony.

Even traditional scientists—especially those with a spiritual focus—are stating that a major shift is on the horizon in terms of the planetary magnetic poles, and accordingly, north will be south and vice-versa.

In fact, certain cosmic events are heralding the shift which is often referred to as the “Shift of the Ages”.

However, there are individual shifts which occur when people acquire new knowledge which erases old paradigms of belief.

Thus, such persons have had a “flash” of insight, a “eureka” moment, a “shift of the ages”—a personal new “Now”.

If we look at individual breakthroughs in awareness as changes in dimensional time lines, we can understand how such time lines are like “ages” or “eras” because people are exposed to particular beliefs for many years due to family structures, church affiliations, educational systems, political orientations, socio-economic backgrounds, etc.

When the various doctrines of these groups that we all have been involved with begin to fall away and new principles emerge (which are actually ancient), we have a choice to either:

1.) not accept them and to remain intrenched in what is familiar, or
2.) we can step boldly into the newness and learn more.

It is a scientific fact that when the brain receives greater knowledge, new neurons are created; in the chromosomes throughout the entire physical vessel telomeres are elongated; cells are crystallized; and DNA is multi-stranded. In brief, we regenerate.

Consequently, regeneration is a personal “shift of the ages”–a personal “flash”.

We elevate to new time lines within the space/time continuum.

When we fully anchor to the newness, we are literally physically stronger, emotionally calmer, mentally focused, and spiritually refined.

What is currently occurring in the collective world even with the seeming constant chaos of medical debates, political confusion, philosophical arguments, etc. may seem like a “storm”, but it is actually ironically a “calm before the collective consciousness of elevation”—the ending phase of “Kali Yuga”—the “Age of Chaos”—of which we are taught about in the oldest scriptures in the world which are those of the Vedic modality, although most other scriptures contain similar information.

Throughout the ages, scriptural texts have built upon each other—sometimes leaving out vital information and sometimes totally changing certain Divinely revealed wisdom or adding on doctrines to fit a particular manipulative agenda.

Much of mankind has become a very bored and never satisfied creation.

In the name of progress, mankind has developed very dangerous concepts, technologies, and substances.

It is as if the key words for such persons are “Change”, “Control”, “Manipulate”.

However, as just mentioned, all of this must occur before the galactic (and thus the planetary) shift truly manifests.

In the realm of the INFINITE PRESENCE there is complete calm.

There is no anxiety, no stress, no worry.

We can tune-in to this blissful state by being diligently focused on daily spiritual “sadhana” (“practice”).

If there is a real belief that we are “OF GOD”, then we have the ability to release all that is uncomfortable that we witness or experience.

It takes a while. The process is not instantaneous.

As I find myself reminding my clients and students, there are still bills to pay, career obligations, educational pursuits, family obligations, community concerns, etc.

We cannot pretend that we are already in “Sattva Yuga” (“Age of Peace”—the “New Golden Age”) and ignore the “storms” on the material plane.

A person cannot decide that by next week he or she is going to run in a marathon or climb Mount Everest or wire up a building or write a book on the great philosophies of the world and their effects upon humanity, etc.

It is the same with enhancement of collective consciousness.

Like the proverbial links in a chain, many individual “consciousnesses” create the collective consciousness.

Therefore, each of us must do our parts to help in the elevation of the planetary mind.

There are people who constantly complain about disharmonies, but they never endeavor to decipher why they are occurring, and many want someone or something outside of themselves to do the work for them of changing things.

Think of a student who always complains about how difficult a course of study is rather than asking for a consultation with the Teacher for clarification of concepts or not obtaining a tutor or not actually sufficiently studying the texts for the course.

This student should not be surprised or angry if he or she fails the course!

Now suppose there is another student who is also having difficulty in the same course, but he or she has a consultation with the Teacher, takes advantage of tutorial availability, carefully reads the texts, and does all the required homework.

That student will pass the course and will also be intellectually elevated in its concepts.

They will perhaps be able to tutor someone else the next semester.

Consequently, anyone who claims to want change in the world has a responsibility to help to make the changes.

SOURCE is sending the LIGHT and SOUND—the “cosmic textbooks”, the “lessons”, the “lectures”, the “re-wiring” of DNA—everything that is necessary for spiritual and intellectual development.

In the “chaos” of the “Now”, is the “calm potential” for “collective awakening”.

The first step to take is “registering” for the “awakening” by asking SOURCE for it.

One of our greatest world Teachers and Prophets taught: “You have not because you ask not” (Yeshua Ha Messiah).

Inside of us is a whole world—formations of the stars.

There can be CALM within us regardless of the seeming storms on the outside.

The LIGHT that we await, however, has no storms.

The “Shift of the Ages” is a new energy, frequency, and vibration.