The Event Could Happen This Month 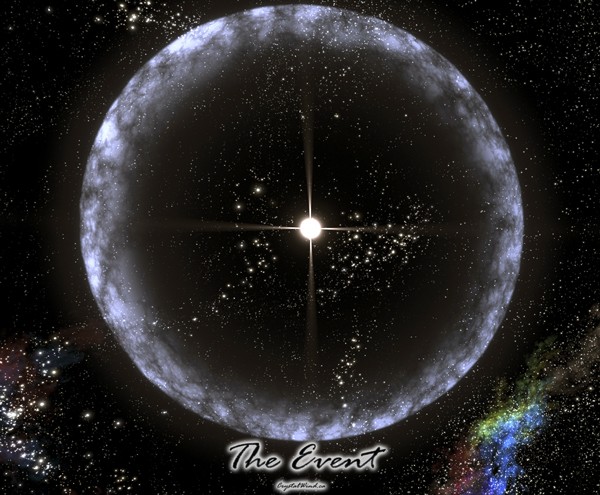 Last night - on 12th December here in New Zealand, therefore 12:12 - I regressed someone very dear to me. For new blog readers, I am a qualified experienced past life regressionist. To our amazement, her Higher Self started channeling information about The Event which is believed to happen before 21st December. In other words, within DAYS.

Please use your discernment as you read these excerpts from the channeling. I believe the integrity of the channeling to be sound because I closely observed the person as she was channeling and I know it to be a genuine deep trance.

I have put a paragraph at the end in bold because the information is astounding. Please don't miss reading it.

Channeling About The Event

'People will be shaken to their core by it...It feels like an earthquake, not necessarily a big one but a GLOBAL one...It happens all over the world at the same time...I do feel it’s in December...It's not about fatalities but it will be something that has never happened before...It’s enough to simultaneously affect every human...I feel like the shake AWAKENS more people. It stops people focusing on Covid - enough to question what on Earth is happening, and then that will awaken more people. I think this Event is orchestrated by off-planet beings...It’s part of the plan. This is the first domino because it’s something that no one can explain, so people start to question their reality. They will stop listening to the news because it’s (the Event) inexplicable. Light workers just need to be prepared and not be afraid. It is nothing for us to be afraid of but other people will be afraid. Light workers will know. It’s the only thing that can globally stop everything being about Covid...This is a start. It’s a distraction.

Everything needs to have a shakeup before it can be resettled...There will be crashes in the financial markets. Things have to be destroyed first. It will appear terrifying to some people but we can’t go on this way. There’s nothing that can stop the (world) leaders regarding Covid unless it’s something physically outside of their control.

Before the peace and prosperity comes in, first everything has to all come down, which takes time. Questioning the reality, the narrative, the control. And people will be angry that they’ve been separated for so long from other people. We’ve felt for so long that it’s only our country but because this event affects the WHOLE globe, people will become very angry that they can’t see people in other countries...And it makes them realize how we ARE our world and not just an insular country. So people will really want to see the borders open because their loved ones were affected too...Covid was a last ditch effort (by the dark forces) to get control...The biggest thing we can do (regarding the Event) is not fear, and hold the Light for everybody else.

I feel like it (the Event) will be a snapping inside people’s brains, like a cracker going off. Like the shake literally snaps something back into place – like coming out of a fog. I feel this shake happening in a matter of days. I’ve got the 21st, but it could be 21 as in 2021. It is such a shift in timeline that there’s no going back to before.

People will understand the truth at the level they need to learn it. Some people will have to start at the beginning, and understand the truth of the world and what’s been happening for millions of years – the control, the darkness. That’s why those people are scared because it’s like a remembrance that comes over everybody. Some people, like light workers, don’t need to remember much – but for others it’s overwhelming. And that’s why people could be yelling in the streets and other people are afraid in their homes - because suddenly the world is different and they are processing it. But it will be people like us who understand what’s going on that can calm others – they will listen to and follow us.

Everything falls away. Every part of society that has been constructed to destroy humans – their health, their spirituality, their connectiveness – will be shaken up. Things like fast food – people will just leave the industry. No one will work there anymore. It will slowly all fall away, like dominos, in all aspects.

Something will happen before Christmas. Because of the shake – or whatever happens, if it’s a metaphor, whatever event happens before Christmas – the IDEA of Christmas will go. Suddenly it will be about PEOPLE. Because of what everyone had been through before Christmas, people will come together but the day is – we are just grateful to have each other. That’s the point. Christmas as we KNOW it, or as you PLAN it, won’t be the same. People will reach out to long-lost people. It’s like a day of reconnection and celebrating being a human.

The vaccine and 5G – I think there’s something in it (the vaccine) that is activated. It gets activated but there’s an override from the Light and the activation (planned by the dark forces) goes wrong. I feel instead of whatever the activation was meant to do, it’s more of an upgrade. So the people who GOT the vaccine NEEDED it TO upgrade. They are the ones who needed to be awakened. And when they (dark forces) flip the switch, it doesn’t go the way they intended. It actually UPGRADES people’s DNA. People can ‘see’ again. So it backfires (for the dark forces). The people that took it (the jab) NEEDED it. The dark forces plan was hijacked. Because of the high vibration of other people on the planet – and them (light workers) doing the work right now – it can transmute it all. It can change it. The people who were so scared and turned on the unvaccinated, they are the ones that needed this upgrade. The ones who DIDN’T take it (jab), didn’t need it. Or they knew there’s nothing to fear.

I’m getting the sense that when the earthquake – or whatever it is – hits, people suddenly think about the people that matter to them. That will happen around the world. It’s like a near-death experience - your life flashing before your eyes and you realise what’s important. The message gets through in that moment. Everything else falls away. The jobs, the money – NOTHING matters after this thing happens. It’s like the feeling of a close call for everybody on the planet.'

Thank you for reading this post. You are welcome to share it as long as you re-post it in its entirety, including the link to my blog site.

Where We Go One We Go All.

I am Sierra. I am an ambassador for the Galactic Federation of Light. There are many Galactic Federation representatives on Earth right now. We came to help humanity ascend to the Fifth Dimension. Beloved Gaia is already well on her way in her Ascension. I will share with you my personal Ascension journey and my thoughts on global events. Welcome. Where We Go One We Go All! Source