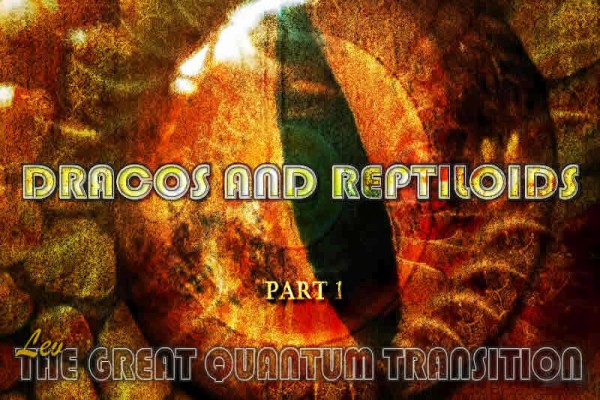 Draconoids (or Dracos), like the Nagas, are descended from the Primordials and Black Archons, created personally by Yaltabaoth. These entities and powers are the foundation of the Grey eons, an integral part of the Universe that includes our 3D Earth.

It is also the Supreme beings in which the madness of their Father, the Black Co-Creator of our Local Universe, has merged with the Light of Sophia, the World Mother, and Her son Yaltabaoth.

Primogen Dracos and Nagas were born earlier than Man, raised by Yaltabaoth, but later than Perfect Man, brought into being by Supreme Hierarch of Pleroma, who built eons and civilizations of Light.

Draconoids and Nagas are very close genetically. There are even their hybrids, the Serpento-dracanoids.

Both received possession of our Earth and completely dominated it, although they have different abodes in other places, for example, in the constellation of the Dragon and the Snake. It was before the appearance of man on our planet.

When Adam was born and placed on Earth to “go forth and multiply”, Dracos and Nagas, obeying the will of their Dark creator, went into the inner Earth, founding entire underground kingdoms in Agartha.

They did not accept this situation and secretly decided to destroy mankind. But they did not intend to do it with their hands so that they would not be blamed for anything, but by Man himself.

They built a whole system of his self-indulgence in men’s sins and vices and self-destruction that is in full effect today.

The mechanism for the implementation of their plan was and is the visible and invisible power holders of this world. They are ruled by the external Gray civilizations, mostly reptiloids. Everything in this world so far belongs to them.

Of course, Co-Creators and the Higher Light Hierarchs helped humanity as much as they could, or otherwise, we would have been long gone, taking into account the power that wanted to destroy us.

But now everything has changed dramatically. Nagas and Dracos have lost their Dark creator and master, Yaltabaoth. He went to the Light Side and got a new name – Yaltabael.

His former “masterpieces” became “property under abeyance”. They witnessed numerous eliminations of Gray and Black beings.

Co-Creators have put Dracos and Nagas before the choice: to undergo a conscious cleansing of karma and transformation to continue evolving in the United Light Family or to be zeroed as a counter-evolutionary force.

From the beginning, Nagas were different.Some groups of them who were loyal to the man accepted the offer and even cooperate with Lightwarriors in many ops.

The others remained on the Dark Side. This led to an intensified struggle within the race between the major clans for power and spheres of influence.

Dracos was also originally a constructive civilization. The Light of Sophia, which was partially transferred to them from Her son Yaltabaoth, affected them. But later, the insanity gene of the Black Parents did its work.

The race began to degenerate rapidly. As a result, there was a split, the division into two branches: Light and Dark. They did not have a middle one, Gray.

On Earth, both groups of Dracos ruled from a long time ago – in the territory of modern China and other Asian countries. There embodied the primary Dracos and dragon-like Intelligence forms. It is reflected in extant legends and artifacts.

Light Dracos are very wise and peaceful. The LFs’ ground team interacted with them during one of its operations in China. Their planetary abode is in Beijing, in one of the halls in the Forbidden City, Gugong.

The artifact of the Dracos is represented there by the Crystal of Celestial Purity, the combined energies of these entities’ Luminosity. After jointly clearing the karma of the maternal Logos of the Light Dracos on the Altar of Heaven, the Lightwarriors received as a gift a Crystal copy which they sometimes use in their ops.

Black Dracos are also rooted on Earth, and for a time two branches lived here in parallel. Both are a higher form of Intelligence, having once possessed a single Monad and the bodies of its manifestation – the Logos and the Causal Body.

After the split, each branch received half of the Monad. One was filled with Light, the other – with Darkness. As higher entities, each of them created their cosmic races.

Black Dracos gave birth to many Intelligence forms similar to them but only in appearance. They could not give them the Monads – only physical and Subtle Body.

That’s how reptiles came about which is represented by many species. Only a few are on Earth – iguanas, lizards, crocodiles, chameleons, turtles. Scientists also add snakes, though they are not reptiles, but the Nagas’ creations. There are about 12,000 known sub-species of reptiles on Earth.

Each of these reptiles, like almost all terrestrial Life forms, has a corresponding cosmo-civilization where they are dominant. Including a variety of Dinosaurs, also Dracos creatures.

They developed all of them when there was no Man. And when they saw his form and potential, they decided to reproduce on his basis a Reptiloid, a hybrid of a Human and a Reptile. He, like others, “creations”, too, had no Monad (Soul) – only a physical and Subtle Body.

Different kinds of reptilian and reptiloid civilizations are very common in the Universe. Several of them are on our planet. And everyone has interests and squabbles with each other over spheres of influence on “their” Earth…

They came here a little later than the Nagas, even before Man, and for that reason consider this planet in no way ours, humans.

This point is very important for all of us to understand why all these bacchanalian processes are going on around us right now.

Reptiloids (repto-humanoids) were created imperfect, flawed, and not self-sustainable. They were abandoned by their creators to their fate, or self-organization, as they call it. It was, in fact, the wild survival.

For it, reptiloid races do not have many options, mostly by correcting and improving their genetics. And there are not a lot of ways either: theoretical research, experiments and crossbreeding, hybridization with other, more perfect protein Life forms.

They have conducted and are conducting extensive crossbreeding with various species, to bring genetic material into their genome that can enhance it.

Their main problem is an acute lack of Lifeforce. The energy received at birth is enough for a very short time, the “battery” discharges quickly.

A separate area is an experimentation with crossbreeding with men, introducing human genetic material into their DNA.

The physical body of any earthling has a protein basis. Our body consists of DNA segments and genes brought into it by space donors. Among them were Pleiadeans and 32 main “parents”, as well as others, more than a hundred in total.

Such genetic mix, by the principle of large-knot assembly (like cars in a factory), is the warp and woof of our physical bodies. Of course, the question of the interaction of different genetic blocks and units brought by different civilizations leaves much to be desired.

A special place in our genetics is occupied by reptilian segments, i.e. sections of DNA and groups of genes brought in by reptiloids. On completely legitimate grounds, they are also among our genetic godfathers.

Modern science denies it. Although how can it not deny it? Then it would have to admit that man descended from a reptile, and not from an ape, as they claim until now.

It is a fact that a human being has rudiments, for example, coccyx, which is a degenerated queue. And at the initial stages of intrauterine development of the human embryo all have a tail.

Gills were also thought to be present, but scientists have now disproved them. What used to be thought to be gills turned out to be only folds of tissue in the human embryo – the precursors of head and neck.

Since then, these folds have been called “gill arches”. Although it is more correct to call them “visceral” because internal organs are formed from them. Gill slits, same as they are in cold-blooded animals, the human embryos are not formed.

Reptile insertions in human genetics are an objective reality. They give us strong innate immunity, increase regenerative capabilities, i.e. our survivability.

For example, severed limbs in some reptiles regenerate and grow back. That was supposed to be with humans as it was in the last Satya Yuga…

At present, a very serious disagreement arose between the reptiloid clans controlling Earth that led to a split. Some disobeyed the Council of Elders, which decided to peacefully evacuate the entire race from Earth.

The rebels represent an influential group of irreconcilables who refused to leave Earth and give it to earthlings.