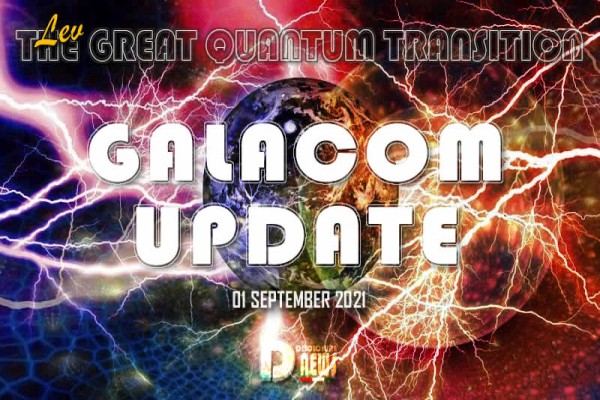 The first week of September 2021 began with magnetic storms. By the end of the week, their strength may increase to 6 points on a nine-point scale. The next peaks are possible on September 10, 13, 16, and 22.

This is part of the Galactic Committee’s work with the energies of the feminine (maternal) spectrum. When Earth was created, they were predominant on the planet and ensured its harmonious development according to the Source’s plan.

Everything changed with the onset of the last Cosmic Night and the subjugation of Earth by Archons. They relied on rigid male energies as instruments of power and enslavement. Throughout the Fifth Race, female energies were ruthlessly suppressed and eradicated.

Now Co-Creators are actively restoring Gaia’s energy. The maternal energies activated by them are removing all of its 3D parts from matter, increasing its potential.

The goal is to return it to plasticity and rarefaction so that it passes through itself without distorting the Light of the Source to this plane.

Galacom removes all circuits and links of male energies on which the destructive Darkness relies and through which it operates. They hold back the incoming Light which comes to earthlings in an incomplete and distorted form.

3D energies are diluted, becoming gray in numerous shades and beings. They are most affected by Darkies, the influence of representatives of the technogeeks development of the planet.

They need such greys entities very much as conductors of the Artificial Intelligence programs, dictating their rules, to keep control over the minds, Intelligence, and consciousness of earthlings.

It is they who breed many biorobots on the planet to reduce the potential of sentient beings to zero. Is that what the Source created and prepared a man for?

After cleansing the harmful links, Galacom fills the damaged chains and knots with new feminine energy. It preserves the integrity of connections and threads so that impulses from the unified organism of humanity can flow freely and without distortion to the unified Earth’s Development Center.

Such a Center has always existed on the Subtle Plane. But Archons reprogrammed it for their needs, and until recently it functioned in this model.

Galacom is now optimizing the operation of the Center, changing circuits, connections, and nodes. The corrosive energy that deforms matter and all that is made of it is being removed.

The activity of the Center is now one of the main concerns of the Outer Planetary Control. A complex operation under “weak anesthesia” is carried out on the living and nonliving body of Earth.

Major works have already been terminated. At present, Galacom is carrying out verification, testing, and final debugging of all Center systems.

But on its periphery – on the physical plane – the disorder, the energetic and psychological swings, and the perturbations continue.

Out of the chaotic events, Galacom tries to extract positive seeds to order the energies raging on the planet.

A great help to Galacom is provided on Earth by all the Light Forces and Galactic landing of friendly space races.

Being in 3D in the Thin and physical bodies, they connect the broken hookups and joints pulling together the bottom and the top, the periphery and the unified Earth’s Development Center, contacts with the inhabitants of other spaces and dimensions.

The Centre is still reeling from chaotic and sometimes unforeseen events that create new problems that require urgent intervention by Galacom.

When the Center will work independently without failures and disruptions, then Earth will no longer need Outer Planetary Control and Emergency State. The planet’s Logos will take overall responsibility for the uninterrupted and full-format operation of the Center.

The entire Earth is now a school of learning for all people, on all planes and realities. The learning curve is accelerating, both for living beings and techno-programmed ones.

At the end of the next stage of training, everyone is given a code on which direction they will be trained next, taking into account the state of their energies, their magnetic and psychic sphere to which they are attracted.

This is a very complex, filigree work that earthlings are unaware of. Its results will appear soon, but not right now, as many wish.

To the most attentive they are already visible today – by how incoherently and sputter the old leadership of Earth is behaving.

They are panicked and confused by the broken chains and previously established communication with everyone who was or is under their control. They see that they are finally losing power over the planet.

Despite their resistance, the Galactic Committee continues to consistently, segment by segment, replace the steering network of life on Earth. A new 5D crystal lattice, the backbone of the planet, is being built before the eyes of earthlings.

Removed parts of the old 3D grid are temporarily duplicated by the new one, but only as a connecting virtual link so that all the parts make up some kind of unity.

The more segments are replaced, the more desperately Archons try to destroy or at least damage the 5D grid, and the more chaotic are the energy on Earth. But the Light Forces quickly repair all damages.

It will be so up to a certain point and a certain degree of readiness of the planet to move into its new structured body without catastrophic impact to its inhabitants.

Those who can no longer live on the new planet will leave the Earth to other worlds.

Lithosphere can change its configuration insignificantly. Magnetosphere – to a greater extent not destroying living, well-established bonds between Nature, the elementals, and developed humanity.

No one will voice the exact scenario of transition from one state to another. Such a scenario simply does not exist.

There are only designs, schemes, methods which are constantly changing depending on the actual state of all Earth’s energies, their cause-and-effect relations, interaction, or confrontation.

Both positive and destructive forces suffer from unbalanced interaction but to varying degrees. The latter is still trying to prolong their lives in the chaos they create, feeding on its negative energies.

As soon as the new 5D crystal lattice is fully operational, the old one will crumble into dust and ashes. The remnants will be removed from the planet, so as not to disturb the new course of life on Earth with their presence.

Each person and other beings have their energy grids or framework that binds all the elements and elementals together in a specific and calibrated order.

In parallel, based on the rebuilt Earth’s frame, the patterns and connections of its inhabitants will change. Some will continue to live and develop, while others will disappear without a trace or, having undergone structural changes, will return to Earth again.

The current confrontation of destructive and evolutionary forces has led to a strong de-energizing of the former and an overstressing of the latter.

The battle is not over. Now, there is a break to assess, to analyze the results of the ongoing war on Earth and in the Solar System, where all destructive forces are concentrated.

The break won’t last long. Galactic Committee will neutralize the enemy before it gets stronger. So a new battle is near. The former Black Hierarchs, including Kali, who have come over to the Light Side, are also actively preparing for it.

The outcome of the battle depends on how quickly the Earth and humanity will get rid of all the distortions and problems of duality – the artificially hostile opposition of male and female energies, Darkness and Light, etc.

The original idea was that Darkness and Light, joining together, would create a gray area that would be a buffer between them and a neutral to both.

In the Greater Cosmos, Darkness participates in the creation of worlds, destroying the old to born the new. But on Earth, it has not happened.

Parasitic, reptiloid, and other leechlike cosmic races are embedded in the grey energies and even incarnate in them to simultaneously parasitizing upon the worlds of Darkness and Light.

On Earth, Darkness has become associated only with destructive forces although in the Universe it has another purpose. Darkness is matter ready to take part in the creation of new energies-forms.

This function has been disrupted in the Local Universe, with particularly dire consequences in the Milky Way Galaxy, the Solar System, and Earth. Humanity has become a carrier of a distorted interaction of Light and Darkness.

The metastases of this energetic anomaly have grown so much that men and the planet itself have become a refuge for many negative forces which do not only not want to interact with Light’s matter and energy but simply can’t.

That is why the change has been so slow to come, and sometimes it just stops.

It’s all in the past now. The planet is leaving the third dimension which is finally winding down.

Earth has changed frequencies and is ready for the transfer of all life into the fourth and fifth dimensions. The algorithm has technically prepared everything, docked the software switching of realities.

In physical bodies, luminous centrosomes took the central place instead of mitochondria, and the organism’s nutrition began to be converted to energetic and autotrophic mode.

The transition to 5D has begun. And there is no turning back. All the earthlings have to do is to focus on raising their vibrations and patiently wait for their turn of transition into the new reality.

The first two passages to 5D are scheduled for pioneers in September. The next more massive wave is planned for December 2021.

We have 1119 guests and no members online