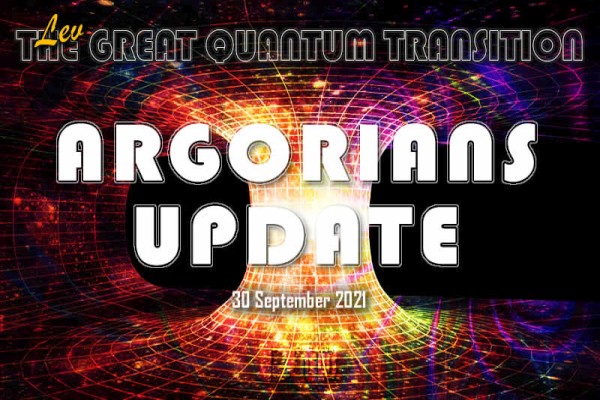 On September 30th, 2021, at 2:08 PM CET, Siriusians’ Lunar Monitoring Base at 23D, which works closely with 25D Argorians’ fleet, transmitted the following summary:

“The change in Earth’s surrounding space is so great that ERMA red energy field is undergoing an accelerated transformation. (Argorians placed the planet in a protective cocoon of this energy during transportation to a new vibrational orbit 5D.- LEV)

Argorians’ flagship, which pulls Earth on an energy tug, constantly corrects the changing the red energy field in which the planet is enclosed.

According to humanity’s free will and freedom of choice on its path, it is impossible to completely protect civilization from global changes and ongoing processes.

All measures are being taken to preserve developing people for the period of passage inside the quantum channel-emitter between dimensions.

The pulsed of the AETRON energy, released by the planetary Crystal, passes through all layers of the crust and atmosphere, is collected on the screen of enhanced protection of the planet …”

(THE GIST: AETRON is the radiant Intelligence energy emitted by Earth’s core. First, it is absorbed by plants, and with them, it is transmitted further to the animal and human world.

Argorians loaded code programs into the emerging 5D Matrix for the constant and cyclical development and selection of l-gamma particles and plasma for the construction of new Intelligence energy matter’s platforms.

AETRON energy is introduced not only into all planet’s systems but also into our bodies, helping the followers the Spiritual path to faster development.

The planets of the Solar System, receiving new energy information from space, sort it by intensity. The Solar System, as a single organism, controls and provides Earth with vital energy so that it can nurture and upgrade humanity. – LEV).

“The earthlings’ perception of new information improves, and physical bodies are transformed as a result of rapid matter’s morphing.

A strong effect is exerted on all cells of the human body, on the physical and energy capabilities of many people, which are still limited.

Changes in the atmosphere and the aquatic environment are going on.

Pulsed emissions of AETRON energy create a special state of the inner worlds of the planet.

Activation of tectonics volcanos is inevitable. Be attentive to the change of space.”

To this summary, the following information of Argorians, received earlier, should be added.

The figure below shows by which quantum energies they continue to transform Earth and us during transportation to a new vibrational orbit 5D.

Many of these energies are already familiar to DNI readers.

Against the general background of the white energy ASTEMO, that forms the Intelligence plasma of space from new information flux, the full spectrum and correction of the work of the entire Earth’s systems are combined. Vibrations increase as programs change in the color scales of spatial matter.

The vibrational space of purple-cream energy GRAZIS removes residual 3D phenomena and changes the development programs of the planet and consciousness.

The blue-green energy FERIDO affects our brain structures with the help of magnetic impulses.

The light cherry MIGRO cleans and stabilizes the work of the airplanes of Earth’s atmosphere. Creates the necessary slip and flows speed.

The golden LOBE forms temporary programs and the signal system of the planet programs the removal of processed and unnecessary 3D energy.

The crimson and gold energy MIRO is directed to the upper layers of the atmosphere.

There, Argorians use it to condense, purify, extract and sort the accumulated 5D plasma.

In small doses, it accelerates plant growth and natural selection in the animal world and condense its plasma.

The blue FIRSCO cleanses and stabilizes our mental development. It also helps to accumulate and increase the potential of plant plasma.

The yellow-lemon energy SFARGO purifies matter from outdated Intelligence and facilitates our adaptation to the new wave pulses of the Ultrasonic Location Field.

With the help of this Field, Argorians track energy information flux coming from the Greater Cosmos for its further placement in particular parts of matter.

The emerald-green KEGINO changes the structure and development of the Earth’s matter by impacts on the planet’s magnetic fields.

The blue and gold ERMO energy forms a new space for 4D/5D matter with the help of temporary programs for its evolution.

Into the creating 5D Hologram, the light blue and silver BLISCO loads the program of our intellectual and brain work upgrading.

By the dark brown energy GASIG, Argorians destroy the remnants of the 3D system and widen the space and platform for the 5D infrastructure.

Applying the radiations of the lilac color GLEZIS, Argorians condense l-gamma particles in space and build energy structures from them to control the vibrations of quantum waves that accelerate the Earth’s transformation.

Using the light blue with a shade of violet BLICADO, Intelligence energy is filtered through inter-dimensional barriers that are made of the black RIR energy.

All this together, speeds up of all planet structures transformation. Reoriented work and a set of necessary knowledge are being strengthened.

By regulating the emissions from Earth’s core, Argorians change the global energy grid, adjust the Hologram and the gravitational component. On the new energy base, the 5D’s matter is emerging.

The symbiosis of radiant energies makes it possible for the Galactic Committee’s communications center to control the planet to turn on new 5D Hologram programs, power fields, and open new Portals.

We have 1141 guests and no members online