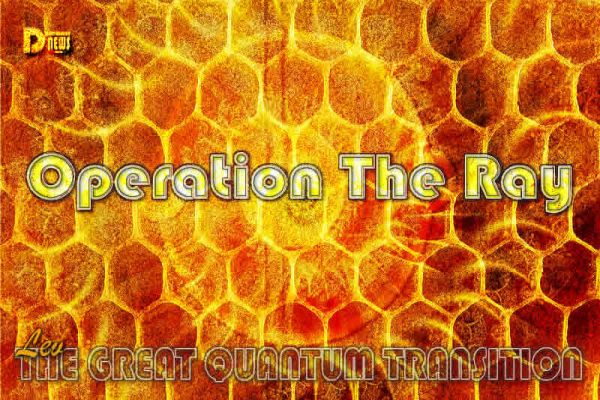 The following info continues the Dracos and Reptiloids’ topic (see DNI, September 9 and 10, 2021). It explains in part why the Galactic Committee and Light Reptiloids postponed the joint op to de-energize the entire parasitic system on Earth which was scheduled for September.

The reason is the new operation of Galacom and Co-Creators related to the reconfiguration of the planet’s core (Crystal).

As DNI reported earlier, this summer, Pleroma Hierarchs, and Co-Creators have begun reshaping the Earth’s core for it could more fully receive the new 5D radiation from the Source.

Below is the shape of a Crystal that our planet could have – two 56-sided star-shaped polyhedrons. This shape was to be for the long Transition period.

But everything has changed very quickly.

The planet will now have a different, more perfect form of core and its projection outside – a planetary crystal grid, similar to a soccer ball (without the painted segments, naturally).

Why did Galacom and Co-Creators change the plan?

As DNI noted, dismantling the remainder of the parasitic Darkis’ system on the surface and in inner Earth was a more complex operation than any of the previous ones.

Recent events have convinced Galacom that the planet needs a more perfect Crystal. The higher the dimensionality, the more faces it has. What was wrong with the updated configuration?

The angles of the sphere’s segments. The principle of harmony, fractal self-similarity of parts to the whole is lost at the fragmentation of the sphere into pentagons.

What structure should the framework of the planet, its crystal lattice have?

It has to be like a bee honeycomb in the first six hours after it is formed WHEN THEY ARE WITHOUT ANGLES. Compare the two pictures.

On August 31, 2021, Co-Creators have begun a new reconfiguration of the Earth’s crystal lattice and core of the Planetary Logos’ Causal Matrix.

Under their control, Gaia did a hurricane reboot of her Absoluteverse – folding into her Super-Monad ALL of her Logos from 3D to 13D.

There they ALL received a new Matrix form of the sacral-geometric Mandala – the Absolute Crystal.

During the reverse sweep of Gaia’s Absoluteverse, all Logos are unfolded with an Ideal, NOT structured, and not defragmented Matrix.

And then the most interesting thing kicked off. A unique process, unparalleled in the entire history of the Local Universe, began.

Namely: SELF-ORGANIZING FACETING, SELF-ADAPTATION OF EACH LOGOS FROM 3D TO 13D TO THE NEW CORE FORM OF ITS CASUAL MATRIX AND PLANETARY MERKABA.

As for our 3D Earth, immediately after the installation of the ideal Crystal Matrix, there was only one goal for all Light Forces: TO SAVE THAT FORM FROM DISINTEGRATION.

Of course, Earth in 3D cannot a priori hold and produce Light vibrations of such a level that corresponds to the form of the Absolute Crystal. It is impossible in principle.

Therefore, the ideal shape of the ball immediately began to disintegrate, that is, to refract, segment into a set of pentagonal honeycombs …

A miracle hasn’t happened and could not happen. Laws of the Universe and the creation of Logos are inviolable.

The most ideal form of the Causal Matrix core and planetary crystal grid configuration in 3D/4D can only be icosahedron or dodecahedron, including their stellar forms.

But Co-Creators and Gaia decided to go all the way – to the victorious end. By any means to save, and to continue their unique experiment.

The attempt was supported by many Higher Intelligence Forms, including Pleroma’s Hierarchs, Co-Creators, the Archangels, World Mother Sophia, and many others.

They developed a plan, the implementation of which gave Earth 3D a chance to hold the form of the Absolute Crystal.

Of course, with many facets but still not distorted, not disintegrated.

The realization of this plan had begun in the evening of August 31, 2021, when the self-destruction of the ideal Crystal Form introduced into the Earth’s Causal Matrix led to catastrophic, almost irreversible consequences…

To stop the disintegration, it was necessary to sharply, explosively raise the vibrations of the Earth Logos, and to hold them for some time, before entering the stabilization phase.

For it, Galactic Committee and Co-Creators decided to bring the Absolute Ray to the planet. It meant direct the contact with Sun in 14D!

Having united energetically into a single structure, Higher Light Beings led this Ray through themselves to Earth.

At the same time, it was reduced by them to a vibration acceptable to the planet so that Earth, her Logos, and humans did not burn up.

But even in the maximum reduced vibes of the Absolute Ray sent to Earth on August 31, 2021, it was prohibitive.

Never before has our planet been exposed to Light’s vibration of such intensity. It was of the highest level.

Many incarnate Lightworkers from August 31 to the first decade of September 2021, also participated in the assimilation of the Absolute Ray and the stabilization of the new Earth lattice and Merkaba form.

Lightwarriors’ ground team was involved as well. Here’s how two of its leaders described what happened to them.

The first touch of the Ray was like a blow to the head.

A super-high-frequency tsunami swept sharply overhead. Lightwarriors were used to such waves. All lives they had been dealing with vibrations, cosmic energies, etc. But this time it was as never happened before.

Their eyes went dark, and breath caught. Wild dizziness and heartbeat began. It was impossible to breathe, as if from an acute shortage of air.

The force of the energy vibrations twisted several vertebrae of the team leader’s spinal column. The chest was crushed, everything went numb. He was in the middle of a heart attack.

On September 1, Lightwarrior had four vertebrae repaired by a bone surgeon, but in the evening a new vibro-tsunami had set them off again. From then, such conditions recurred every day and lasted from two to twelve hours.

It was the hardest period. No medication helped. Only sedatives and vasodilators calmed down a bit. Not for long.

Lightwarriors’ hearts took the brunt of the Absolute Ray’s contact. There were days when both group leaders lay on their beds for twenty-four hours – it was the only way they could breathe with great difficulty.

The slightest physical move increased the vibrations. It became impossible to breathe, and their hearts could not cope.

Even taking a glass of water was incredibly difficult. It was bringing to Lightwarriors half-empty to make it less heavy. Going to the bathroom was a feat, after which they often said goodbye to life.

Of course, they had had similar states more than once before. BUT THEY HAVE NEVER EXPERIENCED SUCH INTENSITY OF VIBRATION BEFORE. And so felt Earth’s Logos. It was difficult for it too, and it was at the limit itself.

On September 9, 2021, another vibration tsunami that lasted three hours ended. It coincided with the strongest magnetic storms these days.

By this day, Lightwarriors had already endured it more easily. The body had adapted a little, and so had the mind and psyche.

What is happening today?

Earth by a temporary bio-Merkaba made of Higher Light Beings and their embodied assistants’ aspects is conducting through itself and adapting to the maximum allowable vibration that it can bear, the substance of the Absolute Ray.

This bio-Merkaba of Light raises the overall vibes of Earth’s Logos and holds the introduced the ideal Crystal Matrix and the new crystal grid, in such a highest freqs that allowed to SAVE SPHERICAL FORM FROM DISINTEGRATION for the present time.

Moreover, a new Absolute-Crystalline form of the Earth’s Merkaba is actively stabilizing.

It is far from over, but already now, regardless of the final result, we can talk about the World Sensation.

NEVER BEFORE DID ANY PLANETARY LOGOS IN 3D OR EVEN 4D HAVE THE FORM OF THE CAUSAL MATRIX CORE AND PLANETARY MERKABA IN THE FORM OF AN ABSOLUTE CRYSTAL.

Not even temporarily! Never! Earth is the FIRST to get it, to endure, to earn it. All Co-Creators and Galacom’s efforts are focused on it.

Many other processes are continuing in parallel, especially in anticipation of the decisive battle between the Darkis and Light Forces on our long-suffering planet. Since August 31, its active phase is unfolding…

We have 1324 guests and no members online