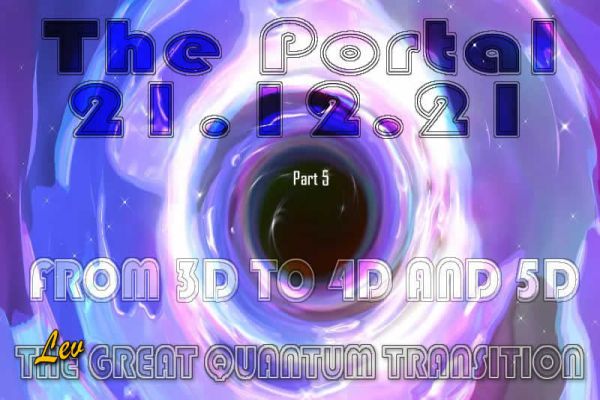 On December 28, 2021, at 02:16 PM CET, the following information was received from the Galactic Committee.

According to it, starting from the Winter Solstice, 50% of the Souls of the total population of Earth have been transferred to the 4D field.

At the same time, an important clarification was made. The ratio of embodied Souls and phantoms on the planet is now also 50-50%. Phantoms or biorobots are people who do not have a Soul, a Monad, or a Causal Body.

According to Earth statistics, if the population of the planet is now about 7,775 billion people, then 3,887 billion Souls were embodied in 3D and the same number of phantoms.

This means that about 1.943 billion people have been transferred to 4D. The same amount is left in the 3D field. Such equilibrium is necessary to maintain the balance of the field system.

There Are No Phantoms In 4D!

Everyone was transferred to the fourth dimension at once, in the bulk. Karmic return back, in 3D, of the part of the transients, about which DNI narrated (see – The Adjusters, 27 December 2021), can be safely neglected because this is a temporary phenomenon. The problem will be fixed soon.

Those who have switched to 4D now have a special mission. They participate in the final, final structuring of the reality of the fourth dimension, suitable for the evolution of all Intelligence forms.

The existence of this or that field of reality does not mean the automatic possibility of the embodiment of sentient creatures in it.

For this, an existential environment must be prepared. It’s like on Earth: the field is one, but there are places where, due to climatic or other conditions, people cannot live there permanently, or it’s so hard to live there that many barely have to survive.

When switching to 4D during the December Solstice, other problems arose.

Parallel to the Portal 21.12.21. work, a mass mediation was conducted, organized with the best intentions.

But a huge number of Reptiloids, Dracos, Orions, Greys, and other low-vibration entities took advantage of this event.

On the Subtle Plane, by clairvoyance was clearly visible that the people who took part in mass meditation were literally entangled in dark wires, and they were all intertwined with each other.

These wires were connections through which energy flows from meditators went not into the Portal of Light, but a space filled with negative parasite races.

Co-Creators and the Higher Hierarchs of Light immediately intervened. They began to work slowly and carefully with EACH participant of the meditation, untangling the suckers that entangled them that looked like a tangled ball of thread.

All flows were distributed according to their vibration level and redirected to their corresponding energy formations.

The energies generated by the Dark Forces were boomeranged into their collective consciousness, as well as into the settling tank of the 3D energies in near-Earth space.

Only after the energies of each participant of the event were sorted into different arms, the space of the fourth and fifth dimensions of the planet was filled ONLY with highly vibrational pure energy coming from ancient human Souls and representatives of highly developed civilizations embodied now on Earth.

After that, the Higher Light Forces together with friendly cosmic races, having already completely taken the situation into their hands, covered Earth with a protective sphere and filled it with the Energy of Ascension.

These events serve as a serious warning and lesson for those who will organize new global or smaller-scale mass meditations in the future.

It is extremely important to soberly calculate your strength, not to act alone, but only in cooperation with the Light Forces of the Universe and not to neglect the basics of energy safety precautions.

We have 1033 guests and no members online