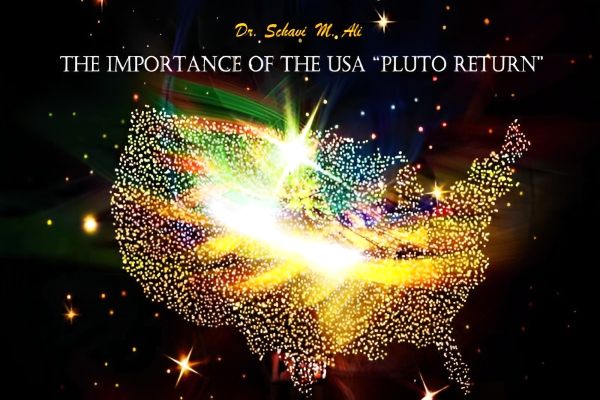 In a natal chart, whenever Pluto, the planet of dramatic changes (sometimes in traumatic ways), arrives in the sign of its original natality—particularly when it reaches the exact degree of that natality, conditions profoundly change for all time—not just in little insignificant ways but in massive transformational happenings.

Nothing is ever the same again.

This is called the “Pluto Return.”

This is true with people as well as with businesses, corporations, cities, and countries.

A cosmic chart can be erected for almost anything.

The United States will reach the degree of its “Pluto Return” in Capricorn at 27 degrees on December 28th, 2022—the day prior to the height of the Mercury Retrograde which is from December 29th to January 18th of 2023.

The vibrations of the ” Pluto Return” will last for many years, and these vibrations have been building since 2008 when Pluto first entered the Tropical sign of Capricorn.

However, Pluto will not exit Capricorn until the year 2024.

Pluto brings permanent changes, but it announces the changes that are coming long beforehand so that steps can be taken to mitigate struggle, trauma, and chaos as the changes occur.

Because mankind tends to be stubborn in this era of “Kali Yuga” (“Age of Chaos”), however, changes come with confusion and strife, with hatred, with warfare, with constant debate, with lies and intrigue.

Pluto’s warning about the need to level up in consciousness and to come together in one accord as planetary humanity for purposes of righteous lives for all people comes with a powerful force.

Earthquakes are strong; volcanoes erupt that have not done so in many years or in centuries; hurricanes and tornadoes are potent; floods are expansive; power outages become frequent; land becomes barren of nutrients; and food becomes scarce.

Why is Pluto in the Tropical sign of Capricorn so fierce?

It is because Capricorn is an earth element sign which governs the geography of nations as well as corporate structures, big and small businesses, the military, the police, social service agencies, political leadership, the constitutional concepts of nations, educational institutions, and real estate.

All of these are changing dramatically.

Because of its prestige, all other nations will be “flavored” by what occurs in the United States as it experiences its “Pluto Return” which has been already “cooking” in the “oven of transformation” since 2008 as earlier mentioned herein.

Although there are civilizations that are thousands of years older than the USA, this nation of immigrants (which gives very little credence to the Indigenous People who were already living here when the first Europeans arrived) still “rules” the world in numerous ways.

Numerous foreigners have shared how disappointed they have become since coming to the USA.

They sadly realize that it has enormous problems.

In fact, recent research by various institutes shows that the USA has more mass shootings than any other country.

The USA also has more people with psychological issues than any other place.

There is also more racism in the USA, and more tampering with Nature.

These are a mere few of its problems.

Yet, all the world watches to see what transpires in the USA, and most other countries turn to the USA for monetary aid, for troops and weaponry to help them when certain segments of their culture are at war with each other, etc.

Regardless of the wide-ranging homelessness in the USA, its drug abuse problems, its rampant crimes, it is the nation strangely being turned to for guidance in so many ways.

All of this is being discussed herein because conditions are unfortunately going to become more pronounced as Pluto comes back to its original degree placement in the USA chart, and there can be no tiptoeing through the tulips or viewing through rose-colored glasses or being in denial with this planetary aspect.

SOURCE, of course, is doing “ITS” work to awaken the sleeping masses through wielding the swords of solar flares, coronal mass ejections, solar winds, Photon Belt brightness, the “pull” of “The Great Attractor,” and other cosmic forces—all of which have the mystical magic of collective consciousness transformation and elevation.

When something transforms (changes) and is pulled up higher (elevates), it cannot fall downward again without suffering degradation.

Mankind has, however, spiraled up and down throughout the eons of time—a frame of energy that only SOURCE actually knows as mankind creates its artificial calendars to organize its world.

Pluto affects our entire planet regardless of which sign it is in throughout its many, many years of traveling through the constellations.

Being in Capricorn since 2008, with the USA’s natal chart having Pluto in Capricorn, has ushered in a powerful frequency of energy that the entire world has yet to fully recognize, and that realization will finally be brought onto the world stage as Pluto reaches the 27th degree of the USA chart on December 28th, and its vibrations will move far beyond that date into many years to come.

Another factor in all of this is due to the fact that Pluto governs the sign of Scorpio whose characteristics are for secrets to be revealed, for suspicions to be brought up for analysis, and for tremendous changes on all levels.

Thus, with Scorpio’s governing planet being in Capricorn which is itself governed by Saturn—the planet of hard lessons, removals, restrictions, the need for better organizational structure, discipline—Earth/Gaia will definitely need the LIGHT of the cosmos to continually assist “Her” in “re-birth” from density to crystallization as mankind reflects on its history and its future in a “Now” of photons bursting out everywhere in this solar system that constitutes our planet’s neighborhood.

As has been suggested in a previous discourse, let us make December the month of HOLY ILLUMINATION.

Our planet is about to witness the most massive changes that have ever occurred since mankind first began to calculate time frames and to record its past.

The term “SHIFT OF THE AGES” is not just a common one.

It expresses a true and amazing reality that has been and still is dramatically unfolding.