The Leap Of The Light! - Awakening The Collective! 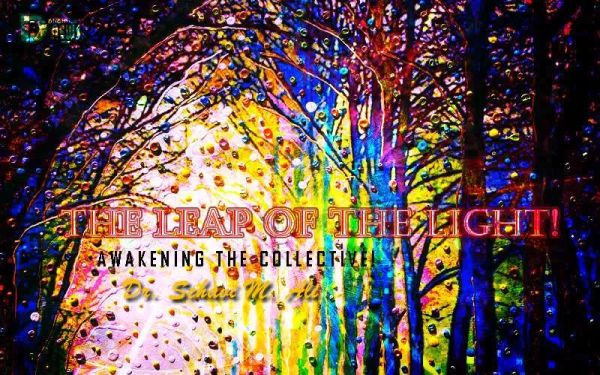 As expected, the Sun of our solar system, assisted by the Great Central Sun, has unleashed a powerful “X1.3” Solar Flare, and another Coronal Mass Ejection (CME) is directly facing our planet which will be another “Cannibal CME” which are the kinds that constitute several singular CMEs (plasma particles of radiation) which come together as one group and devour various vibrational substances moving through space.

LIGHT is streaming into our planet and galaxy more potently than in many previous eras in many ways, but the Sun is our primary manner of LIGHT and SOUND transmission and reception orchestrated, as already mentioned, by the Great Central Sun.

The ancient scripture known as the ATHARVA VEDA, a Vedic healing text, teaches of the benefits of the solar energies for giving us a good heart, a balanced mind, and health of the bones, eyes, skin and overall wellness.

The specific mantra taught in reference to the Sun is: “AUM GHRINI SURYA NAMAHA” (“Oh, Divine, I bow to the LIGHT and HEAT of the Sun”).

This text teaches that “The Sun is the source of energy and power”.

It also speaks of the Sun giving-off “Bhogas” which are positive and negative currents of energetic frequencies. It is believed by those who have studied and who are currently studying the ancient Vedic texts that ancient “Rishis” (Sages) knew more about electricity than modern scientists.

After chanting the mantra mentioned earlier, it is recommended to eat a combination of rice, tumeric, honey, and rose flower petals—a maintenance recipe that can be enjoyed daily.

All of the individual healing benefits of each of these foods from this ancient recipe of AYURVEDA (“Science of Life”) given by “Vaidyas”, who are Ayurvedic Physicians, are also validated by current day Herbalists and Naturopathic Physicians. Of course, for very serious health concerns, other herbs are suggested as well such as the herbs “Arjuna” or “Motherwort” for hypertension, heart palpitations, and general healing of the nervous system.

A “Vaidya” of “Ayurveda” will also suggest certain mantras, essential oils, colors to wear, gemstones to wear, massage techniques, and other natural methods in the realm of what is known today as “Energy Medicine” or “Vibrational Medicine”.

What individuals need will be based upon their “Dosha” (“Constitution”) which is either PITTA, VATA, or KAPHA . Most people have a particular overall “Dosha” and some of the other two as sub-doshas.

Returning to the focus of our discussion, however, the Sun, as the center of the “Milky Way Galaxy”, has an electromagnetic energy that surrounds each planet in this solar system, and this is known as the “Heliosphere”.

He studied extensively on the effects of electromagnetic fields on biological systems.

He predicts in his book that soon telepathy, extra-sensory perception, and high intelligence quotients will be ordinary and thus “normal” characteristics of humans.

Another cosmic researcher to take note of is the German scientist Paul Otto Hesse who published DER JUNG STE TAG (“The Recent Day”) in 1949 in which he states that our solar system moves through the “Photon Belt” ( a doughnut-shaped region of the cosmos which radiates intense electromagnetic frequencies) twice between 24,000 and 26,000 years.

The newest entrance of our solar system was supposedly in May of 1998, and it takes approximately 2,000 years to traverse its twelve vortices.

At such times, weather patterns on our planet change, and the DNA of the human physical vessel transforms becoming gradually stranded differently.

However, even though both of the people mentioned are certainly scholars in their fields, sometimes it is the case with modern-day people that they think that only the teachings of the current time frame are valid—that nothing existed beforehand of such astounding knowledge.

Such people do not realize that cosmic knowledge (and more types of knowledge) existed in what may be termed “ultra-ancient” time lines, and therefore, much current knowledge is rooted in earlier epochs.

One of these earlier teachings is that SOURCE chooses to transform creation at DIVINE WILL and cannot, therefore, be held to specific time periods for specific actions to take place.

For instance, as humanity elevates in collective consciousness via its free will choice to do so or not, time periods can be lengthened or shortened relative to various cosmic occurrences such as the time it takes to journey through the “Photon Belt”.

When we Cosmic Scientists speak of “space time continuums”, for example, we are speaking only of a frame of reference in terms of time.

Only SOURCE holds the key to time and all of the “paramanus” (“atoms”) of the physical elements of creation.

The RIG VEDA states that: “VISHNU is the most ancient of all”. “Nothing has created VISHNU, yet VISHNU has created all”.

The text further speaks of VISHNU being “ever-present”, being “the cause of all causes”, being “Sri Matre” (“Divine Mother”), being “all of the mantras”, “transcending time itself”.

The title/name VISHNU, which is also known as NARAYANA, translates as THE SUSTAINER.

Even though the characteristics of SOURCE are depicted as specific aspects of “things” in creation known as “murties” (“representations”) and have particular names and forms, those who are well versed in the ancient scriptures of SANATANA DHARMA (“Eternal Path”) understand that what is often referred to as “GOD” is ONE, an INFINITE PRESENCE, the ABSOLUTE— which is neither male nor female in the way in which many of mankind tends to perceive of “GOD” (although most people of Western orientation use the male pronouns of “He” and “Him” in reference to SOURCE).

Even the word “mankind” brings to the image of many people a male form, but this word “man” is from the Sanskrit “Manas” which translates as “Mind” or “Consciousness”.

Thus, both women and men of the human entity constitute “mankind”.

As LIGHT in its various “songs” and “dances” soars through the “Cosmic Auditorium”, sometimes twirling lightly and sometimes pounding in strong rhythms as it is now doing, cellular memory will be further cleared allowing LIGHT to penetrate to create new records more easily.

Some clearings may come in dreams—journeys into other existences or healings of deeply embedded experiences.

LIGHT may come as messages from the HIGHER SELF which may later be validated in a mystical manner. It may come for some people as they consciously open up to information that they may have negated earlier, and accordingly, they willingly study in more depth.

Consequently, LIGHT comes to individuals in numerous ways, but it is offered to everyone. We are free to choose its invitation or not.

Thus, so-called modern mankind can think that it knows everything and refuse to listen to other points of view and continue to experience chaos and confusion or there can be an allowance of the LIGHT to move the planet forward into both ancient and new DIVINE REVELATIONS.

Sri Yukteswar, the Guru of Sri Paramahansa Yogananda, stated in his book THE HOLY SCIENCE that “yugas” (“ages”) have ascending and descending cycles.

Interestingly, this is just after the transformational planet Pluto will have arrived in Tropical Aquarius and in Sidereal Capricorn in 2024.

We are beforehand in a transitional period when more of humanity will be given the opportunity to elevate in spiritual consciousness.

Sri Yukteswar goes on to teach that prior to the start of the new era, there will be heightened major conditions on our planet such as strong earthquakes, volcanic eruptions, floods, etc.

Cosmic energetics are certainly performing a major “production” just as Sri Yukteswar and Sages long before him—both women and men— have informed us that they would.

These energetics have done so before throughout many “eras”, “eons”, and “ages”—whatever terminology we wish to employ for discussions of time sequences.

However, we must speak now without giving specific numerical measurements to the activities in the cosmos and without using traditional scientific logical explanations of the “cosmic dance”.

As “lights” of the LIGHT, we are like the Sun which takes its messages and activations from the Great Central Sun.

This must result in our being open to being continually taught, and we must delve deeply into the “waters” of knowledge and wisdom—not tiptoe in its shallow parts.

We must dance in rhythm with SOURCE to ensure that crystallization is a reality.

Are you ready for the “production” called THE LEAP OF THE LIGHT?

If you are, realize that it may not take certain calculated amounts of time for certain cosmic occurrences to play-out.

Activities in the cosmos are changing traditional scientific beliefs daily.

Major shifts can occur in the proverbial “blink of an eye” or in a long drawn-out time frame.

One thing is certain—we are indeed in a transformational period.

Regardless of your path, all of the world’s holy books teach similar messages.

Some may go into deeper detail, but a sea is far deeper than a lake even though the waters of the lake may flow into the sea.

To Be Dependent Is Human

DNA Codes Being Activated - The Hathors

Teachings of the Masters: The Frequency Of Love