The Magnetosphere And The Veil

The Magnetosphere And The Veil 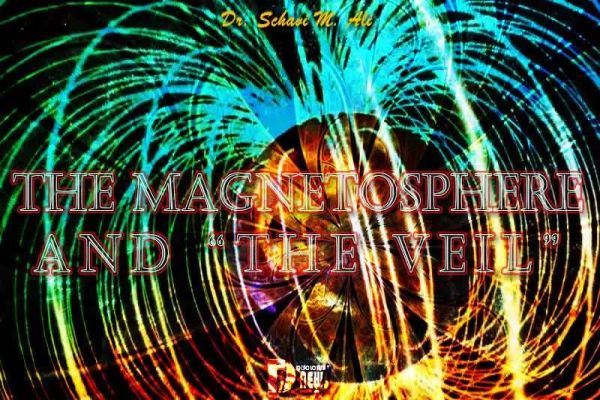 Whenever Astronauts (or “Cosmonauts” as they are titled in Russia) go into space beyond our planet’s magnetosphere, they have consistently reported a powerful intuitive capability and a seeming rise in consciousness.

A definite belief in a HIGHER POWER develops (or accelerates if they already have such a belief), and they have reported sighting vehicles of unknown origin commonly called “unidentified flying objects” or “UFOs”—extra-terrestrial vehicles.

Mainstream science has reported that the magnetosphere (the magnetic shield surrounding our planet) has been depleted by approximately 20 percent which allows for positively-charged proton particles (the type that mankind is not ready to physically accept) to soar to our planet’s inner tectonic plates and to also affect “Her” outer atmosphere.

As human beings living on this planet that we refer to as “Earth” and also as “Earth/Gaia,” we too are affected by whatever our planet experiences.

Thus, if our planet is shifting, elevating, and receiving greater LIGHT, so are we.

As has been previously mentioned, SOURCE is not allowing mankind’s folly to destroy our planet; therefore, a transformation is occurring so that we can be crystallized rather than remain carbon-based.

We are being made capable of receiving the enormity of plasma waves—protons, electrons, neutrons, and more and acclimating to them which is why there are “Light Activation Experiences” physically, mentally, and emotionally—-and also spiritually.

The dropping of the magnetosphere is not actually a depletion of its protection; rather, it is an “unveiling” of a profoundly powerful arena of LIGHT that is performing as a “mid-wife” for our accelerated elevation—“re-birth”.

From “beyond the veil” come codes of information and the often mentioned LIGHT AND SOUND TRANSMISSION AND RECEPTION.

The magnetosphere must drop its shielding in order for us to expand, to elevate, to have a “Consciousness Transfer.”

This is not to say, however, that we should not engage those practices which help us to gradually receive the codes rather than to be engulfed in them all at once which could be overwhelming.

Wearing, for example, Shungite (which is billions of years of age and comes from the village of “Shunga” in the city of Karelia in Russia) has been proven to help in blocking some electromagnetic field (EMF) energy so that we are calmer, less stressed, relieved of aches and pains, sleep better, and have more energy.

It also cleanses tap water of toxins (but I prefer to use spring water for drinking and cooking).

The “holes” in the magnetosphere are being sealed by SOURCE periodically so that indeed we are not bombarded with the waves coming from “beyond the veil”.

Then the “holes” are allowed too again open.

More of them will gradually open until the entire magnetosphere drops to zero point.

Many people who have developed a powerful intuitive capability or those who are attuned to ancient scriptures and have also developed high intuition or connection to the HIGHER SELF—THE SOUL—SOURCE FREQUENCY—are speaking of what some refer to as a “Grand Solar Flash” which is to soon occur.

Whether this term “soon” is based upon how mankind calculates time or on how SOURCE governs time is debatable.

On one hand, this “flash” could be relatively soon—within months or a few years; and on the other hand, it could be millions of years away yet.

Either way, it could happen in the “soon” that we understand as human beings because to SOURCE one year is said to be a thousand years in the scripture called HOLY BIBLE; whereas, in the Vedic holy texts, a year is to BRAHMA (the “EXPANDER” [one of the aspects of SOURCE]) is a billion years.

Time is not linear anyway, and there are many “time line jumps” occurring.

Most Spiritual Scientists (persons of various paths of HIGHER KNOWLEDGE), however, agree that a major cosmic happening is certainly going to occur “soon”.

The evidence of this are what more and more people are experiencing whether or not they understand the reason: rapid heart rhythms, anxiety, dizziness, headaches, muscle pain, insomnia, lack of appetite for the usual foods, not enjoying being in the company of certain people or groups any longer, obtaining different kinds of reading material, and much more.

All of these “experiences” are the pre-requisites to releasing density and achieving crystalline spiritual clarity—again, to repeat a word used constantly—“re-birth.”

This newness of being has to occur so that there will be no complete cataclysmic dissolution of our planet during the continual “3d” chaos that is currently still “on stage”.

Please review the information given regarding the de-coding of the crop circles of extra-terrestrial origin done by the Cosmonauts Dr. Marina Popovich and Dr. Lidia Andrianova.

There have been two articles on this in the past published on the “Disclosure News Italia” website.

The title of the complete book by these women is: LETTERS OF EXTRA-TERRESTRIAL CIVILIZATION: THE LAST WARNING.

There are still many people who deny that other life forms exist outside of our planet.

They actually think that our small dot of a planet, although beautiful, is the only place where life exists and that those who write or speak of such things are watching too many past episodes of “Star Trek”!

Such persons do not read truly important (sometimes referred to as “deep”) literature or meditate or even merely contemplate the vast cosmos.

They are content to watch “3d” television chaos, to eat toxic food, and to rely on whatever certain manmade “controlling” systems tell them to do.

They are the ones whose motto is “Yes, Master.”

They do not think for themselves.

They are disconnected from SOURCE FREQUENCY and allowed to be unanchored via free will.

Thus, they bring “pralaya” (translated from Sanskrit to English as “strife” and “to be drowned in chaos”) on themselves.

As a verse in the BHAGAVAD GITA says: “Divine teachings are not to be revealed to anyone who is unwilling to receive them or who are not devoted to the Divine”.

So, caution is advised in our conversations on topics that seem “other worldly”.

However, there will be wider disclosure soon.

Do not be surprised if ships land at malls, at sports events, at musical concerts—anywhere there are huge amounts of humanity because world governments are keeping too many secrets, and many of our “galactic neighbors” and “non-galactic neighbors” are not going to allow themselves to be further denied—especially when they are trying to assist our planet in its elevation.

Let us briefly review what ancient texts teach about what we term “ETs”.

On certain other planets, ships work by sound vibrations.

They can control gravity, space, and time.

Some use psychic power.

Our planet controls, however, its ships only by mechanical methods.

Mankind’s devices and tools are having lots of glitches and complete break-downs in proper functioning.

This is one of the “pre-cataclysms” spoken of in the crop circles and why we cannot fully rely on mainstream technology for our understanding of cosmic occurrences and their effects upon our planetary creation.

LIGHT carries spiritual atomic frequencies or photonic oscillations—“encodement’s” of knowledge from “beyond the beyond”—a phrase that has been given to be used often in this “Now” as can be gleaned.

Not everyone is going to recognize them, and thus, their DNA will remain dormant in many cases. It will not awaken to TRUTH.

Again, they must be allowed their free will.

The BHAGAVAD GITA says: “All problems in life arise from some weakness of MIND due to the ignorance of its own essential nature.”

What is this “essential nature”? It is a non-local (not within the material brain), super-conscious capability to communicate with HIGHER REALMS—with DIVINE CONSCIOUSNESS.

As “the veil” thins, we can receive massive amounts of our own nature that is awaiting our recognition.

SOURCE is extending its rays into the magnetosphere.

The so-called “holes” are entranceways for more LIGHT from “beyond the beyond” to enter our solar system, our galaxy, our planet, and us.