The Origin Of The Earthly Races 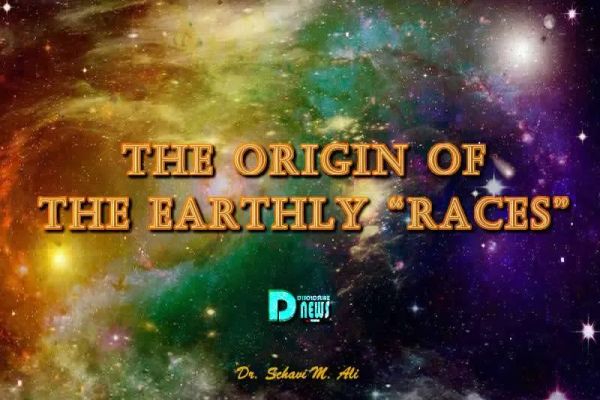 The following is the information that can be confirmed by conducting research via traveling to ancient sites, learning other languages, and studying ancient manuscripts.

Relative to the earthly experience, the first humans developed from the “Olduvai Gorge” in East Africa (in the areas of the current nations of Uganda, Kenya, and Tanzania) which at the time was part of ancient “Alke-bu Lan”— a vast continent comprised of what we know today as the divided continents of Africa and Asia.

These first “humans” were dark-skinned, thick-lipped, and wooly-haired.

They became the “phenotype” for other humans who traveled to other parts of the world.

This was millions of years ago.

The phrase “Alkebu-Lan” translates from the ancient Medu Neter (“Sacred Speech”) language into English as “Land of the Blacks”.

This is interesting in light of the fact that the biblical name “Adam”—the supposed first human created—is from the ancient Hebrew word “adoumah” which translates as “Child of Black Clay”.

Over many eons, these first humans traveled throughout the world, and because of climate changes and needing to adapt to these changes, their physical appearances changed.

Bitterly cold temperatures, for example, during various “Ice Ages” (which seemed to have existed only in certain parts of the planet at particular periods) in what would eventually over time become the European places of life produced light-hued, thin-skinned, narrow-lipped, straight-haired beings who made their homes in caves.

Those who remained in the warmer parts of the planet needed the darker skin as protection from intense sunlight and broader noses to take-in oxygenation.

In brief, as the first “humans” ventured into other parts of the planet after “being born” out of the “Alkebu-Lanian Motherland”, their physiology changed as well as some facets of emotional make-up.

Keep in mind that this is the “earthly” development.

The ancient Kemetu (people of what became “Egypt” in the Greek language as Grecians came into Kemet in the 5th Century B.C.E.) traced their heritage to the star system “Sepdet” which was later known as “Sirius”.

This star system arose each year over the three main pyramids (there were at one time 109 pyramids) in what would be the current Northern Hemisphere summer on or about July 25th, and at this time the “Hapi” (“Nile”) overflowed which was symbolic of a rich spiritual and vegetative harvest to come in the autumn.

There was no winter with bitter cold, ice, and snow.

Nor was this the case (and still is not) throughout the African continent.

The Kemetu had contact with beings of what we call the planet “Mars” and traded the metal gold for technological knowledge.

The grand edifice “Horem-Akhet” (“Day on the Horizon”)—known from the Greek language as “Sphinx”—is dated at well over 83,000 B.C.E., and water marks indicate that much of it laid beneath waters of a massive flood.

The land of Atlantis which was taught about in both Kemetic and Greek temples experienced three major floods— approximately 50,000 B.C.E., approximately 28,000 B.C.E. and the final one which sank the land in approximately 10,500 B.C.E.

Survivors fled into Kemet where they were taught Divine Principles by “Tehuti” whom the Greeks called “Thoth”.

He is said to have lived 300 years and wrote about 3000 books on science, medicine, ethics, and metaphysics.

Greek scholars such as Herodotus, Hippocrates, Aristophanes, Aristotle, Socrates, Plato and others studied in Kemet.

One day Plato is said to have asked his “Kheri-Heb Seb” (“High Priest Teacher”) how old the Kemetu were because Plato was astounded at the huge pyramids and temples and wondered how could such grand edifi have been built by humans.

The Kemetu traded gold for technological information with what we call the planet “Mars”.

The history of the people of Kemet is recorded in their holy books and on their temple walls in the language of “Medu Neter” also known as “Hieroglyphics” (Greek for “Word Pictures”).

The problems in tracing history to its hidden knowledge is that the Western world bases its teachings on its classical cultures of Greece and Rome.

Few school classrooms teach that the original classical civilizations of all people should actually be “Alkebu-Lan” and its nations of Kemet and Bharata, and even Kemet rose up from a nation further to its south called “Ta-Seti” (“Land of the Bow”).

Discussions that may seem to be “racial” in focus make many people nervous.

So much of humanity is reluctant to face the fact that Europe is not the center of history—at least not Earth’s history.

These were indicative of the people as well as the color of the soil in part of the nation.

“Asrae” (which was known in later ages as “Israel”) was also a part of Kemet, and this is the place where the first “Hebrews” (anciently known as “Habiru”) ventured into when they came from a land in northeast Africa called “Libu” in the 19th Century B.C.E. because they were experiencing a famine.

They asked for land in which to raise their families and cattle.

Only a small band of these people arrived in “Asrae”.

Over many eons, they traveled to other parts of the world taking the knowledge that they had learned with them.

This is why we find so-called “Jews” throughout the world including in Europe.

The “J” sound did not exist in the English language until the 17th Century A.C.E.—during the time of King James and others.

The term “Jew” is derived from the word “Iu” (pronounced “EEE-YOU”) which was a name of the Divine in feminine form which the Habiru had worshiped before arriving into “Asrae” where they learned of the many aspects of the Divine called “Neteru” (“Divine Forces of Nature”) which became their concept of “Angels”.

The same is true of the Vedic “Devas” and “Devis” (“Shining Ones”) which are also types of “Angels”.

The Vedic civilization of Bharata (“India” in Greek) rose up alongside Kemet as a sibling culture.

They too traced their lineage to the cosmos beyond the planet Earth.

The tops of ancient temples in Bharata are shaped like their spaceships looked.

One of their many sacred texts describes these ships as “Vimanas” which translates as “Flying Machines”.

They were called “Great Clouds in the Sky”.

The MAHABHARATA describes them as being “equipped with blazing missiles and four wheels”.

The scripture called BHAGAVATAM teaches that there are spaceships of different categories.

Some operate only by mechanical methods.

Some operate by sound frequencies.

Some operate by psychic power.

The Vedic civilization traces its cosmic heritage from planetary systems such as “Siddhalokas” and “Satyaloka”.

If indeed humanity arises from an earthly heritage of “Alkebu-Lan”, and the classical civilizations of Kemet and Bharata trace their original star heritage as described, then it is reasonable that ALL humanity has begun originally from other than just the planet called “Earth”.

In fact, science has found that the molecular particles and chemical make-up in humanity are much the same as those in stars and comets in the cosmos.

Think of this when the third chakra—called the “Solar Plexus”— is studied.

We are all from far beyond the “Blue Planet” we commonly call “Earth” or “Earth/Gaia”.

We are merely visitors to this lovely planet.

Our ancestors have traversed the heavens for all of creation.

SOURCE has placed us in our various habitats and allowed us to travel throughout the cosmos.

Modern mankind has lost much of its original capabilities due to a lowering of consciousness and a focus only upon the “3d” happenings of this planet.

However, LIGHT, as is always stated, is now causing a shifting so that deeply imbedded cellular knowledge can rise up for us to reclaim our cosmic “Divine Design” and connect us once again with our HIGHER SELVES—our SOULS—SOURCE FREQUENCY—where we will come to know again certain “Truths” that lay hidden.

THERE ARE NO RACES!

WE ARE ALL OF THE COSMOS.

WE ARE GALACTIC CITIZENS.

WE ARE “lights” of the GREATER LIGHT.

Perhaps Shakespeare’s quote from one of his plays is appropriate here: “A Rose by any other name would smell as sweet”.

Yes, we all have an earthly heritage based upon migration routes to other parts of the planet and the changes in physical makeup that this entailed due to weather patterns, but our original heritage is beyond this planet and into the planets and galaxies far beyond.

Let us stop the racial divide.

I am of the LIGHT!

You are of the LIGHT!

We have 816 guests and no members online