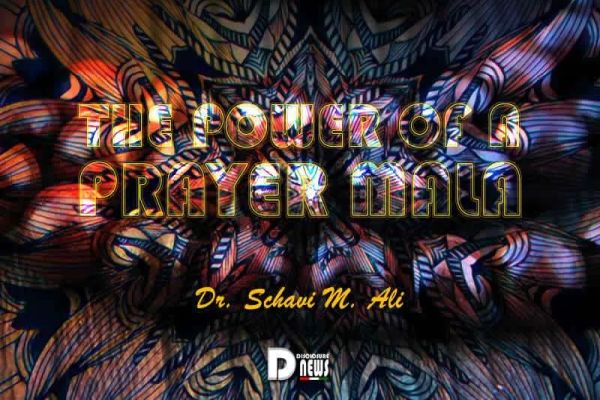 The word “mala” translates from Sanskrit into English as “garland”. In Tibetan Sanskrit, it is known as a “threngwa”.

In Catholicism it is a “rosary”. Muslims use “Dhiker” beads.

In ancient Medu Neter (the Kemetic [Egyptian] priestly language), it was known as a “sha-sha” which translates as “luck”.

Throughout the ages, humanity has employed sacred beads for prayer, meditation, and healing. In the ancient healing science of “Ayurveda” (“Science of Life”), crystals, gemstones, seeds, and woods are known to have vibrational frequencies because everything carries “energy” which is “life force”.

The currents of energy of these substances were studied and taught which is still done so in this “Now” or in the modern era. Science uses crystals and various types of gemstones in certain kinds of technology.

The oldest “mala” was a “sha-sha” found to be over 40,000 years of age discovered in the ruins of ancient Kemet.

Biblical scripture discusses the various gemstones that were in the breastplates of the High Priests.

Although when polished, crystals and gemstones are beautiful, they were used in the ancient world and still used today by those who are spiritually oriented in order to connect with the ethereal realms and to achieve calmness, healing, protection, and to attract needed outcomes (family issues, economic abundance, career objectives, etc.).

In the most ancient spiritual path, “Sanatana Dharma” (“Eternal Path”), particular substances are suggested for “malas” according to what is being sought from the Divine Absolute’s numerous aspects which are known as “Devis” and “Devas”—both words translating as “Shining Ones” and as “Light Beings”—otherwise known in later ages as “Angels”.

The word “Angel” is derived from the Sanskrit tern “Anjali” which translates as “Offering” and also as “To Pray”.

Thus, when we petition to a specific aspect of SOURCE, we are making a “prayer offering”.

The oldest and traditional “malas” have 108 regular beads with a 109th center bead called a “Guru” or a “Meru” bead.

The number “108” represents several things: the originally known 9 planets multiplied by the originally known 12 zodiac signs, the fact that our Sun is 108 times the circumference of our planet, and the 108 most important sacred UPANISHAD (“To Sit Down with Wisdom”) texts of which there are a total of 1008. All of this was Divinely revealed to ancient “Rishis” (“Sages”).

Along with the regular beads, there is sometimes a bead called a “marker beads” which separates each set of 27 regular beads, and there are sometimes also two sets of “counter beads” placed upon a each side of the “mala” on a small cord so that as recitations of a “mantra” (“mind tool”) are made, the devotee can keep track of how many mantras have been recited.

The oldest “malas” were made of Amber, Boddhi Seed, Lotus Seed, Rudraksha, and Sandalwood. In later, but still considered to be ancient times, “malas” were fashioned from Amazonite, Chrysocolla, Turquoise, and other crystals and gemstones.

In order for a “mala” to be properly “seeded” a ritual called “Prana Prathista”, which translates as “installed Life Force” must be done.

This requires that a specific mantra be chanted on each bead for 40 consecutive days.

The mala, of course, begins to work when the devotee first chants with it, but its power becomes more pronounced after 40 days. When first received, however, the “mala” must first be cleansed and blessed.

This can be done by a “Guru” or an “Acharya” or by the devotee him or herself if they have been properly trained.

When the devotee is ready to begin chanting, he or she should be seated calmly either on a chair or on the floor on a cushion. Holding the “mala” between the palms of the hands, the “consciousness-opening” mantra is recited 7 times: “AUM RUTSIRA MANI PRAWA TAYA HUM” (“Oh, Divine, Come forth like a thunderbolt on the breath and purify!”).

Then the devotee gently blows his or her breath on the mala.

Next, some devotees recite the powerful Ganesh (“Remover of Obstacles”) in order to eradicate anything that could interfere with the chanting session and what is being prayed for to SOURCE: “AUM GUM GUNIPUTAYEH NAMAHA” (“Oh, Divine, I bow to the Remover of Obstacles”).

Then, with the thumb and forefinger of the right hand touching each bead, the specific mantra is recited beginning with the bead that is to the right of the “Guru” bead.

The mantra is recoted aloud, but then, the breath must become increasingly low until the mantra is being recited silently within the heart. When the fingers have touched each bead all around the “mala” in succession, and when the “Guru” bead is reached, it is not touched because it represents SOURCE “ITSELF”.

So, at this point, the devotee recites “AUM SHANTI SHANTI SHANTI” (“Oh, Divine, Peace Peace Peace”), and then recites once more the specific mantra aloud, and then touches the “Guru” bead to his or her third eye.

This symbolizes being blessed by SOURCE.

The mala is now ready to wear or to be placed in a special pouch and carried.

It should be oiled periodically with Sandalwood oil to keep it not only shiny but also to keep its energy thriving.

A “mala” can be a wonderful sacred treasure during the shifting of this age as solar winds, solar flares, plasma particles, neutron counts, and more—all heighten and surge into to our planetary realm. It can be an anchor to the “SEA OF SOURCE”.

We have 762 guests and no members online