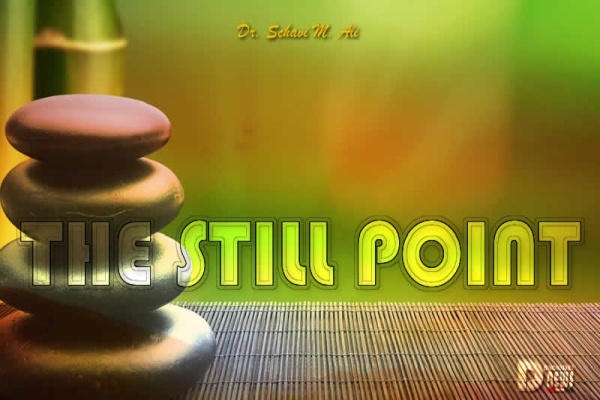 There is power in stillness. For example, when we pray and meditate, we are quiet and in attunement with THE DIVINE CREATOR—SOURCE.

Our planetary home, Earth/Gaia, is often in reverent quietude as “She” makes connections to SOURCE FREQUENCY more powerfully.

Solar winds are currently registered as being below normal—traveling at approximately 2.96 km/s (kilometers per second when normal is about between 300 and 400 km/s), and solar flares are rated at low “B-Class” levels (“B.1” and “B.2”), and the activations to the planet’s inner and outer fields (the “KP Index”) is rated as “quiet”.

There is, therefore, a relative still point in the cosmos.

Think of a movie being shown in slow motion.

This is how people are feeling as they attempt to achieve restful sleep at night which eludes them, and then they make slow movements through the next day’s activities.

Somehow most things get done, but the “doing” is slower than usual, and some activities are postponed because there is simply not much strength left in the physical vessel or the mental state or the emotional output.

We must remember that there are six planets still retrograde (with Pluto going direct at the New Moon on the 6th), Saturn going direct on October 11th, and Mercury and Jupiter dancing direct together on October 18th).

This cosmic “dance choreography” is definitely fatiguing and sometimes even dizzying.

When we are driving and we approach an intersection to make a right or left turn, do we not slow down a bit before making the turn?

Sometimes a red light will make us come to a complete stop.

Just as suggested in this metaphor, the cosmos has come to a slowing-down before speeding up to make its planetary turns and send forth its stronger flares, winds, and plasma waves via the Great Central Sun.

Thus, the message is for us to relax and flow with the energies.

Here is another metaphor: Think of being on a cruise ship.

Do we charge into the control room and take over the controls? Certainly not.

The Captain is responsible for the ship’s direction and it being in proper working order.

We are to relax, enjoy the delicious meals, engage in recreation, and see the various sites as the ship docks in certain ports. SOURCE is the “Captain” of the “Cosmic Ship”.

We can, however, partake of specific modalities so that we can obtain more rest at night and acquire more energy during the day.

Some of the following have been previously suggested, but with so much planetary retrogradation occurring, repetition of important information is very wise:

1.) Drink a cup of Nettles Tea each day. Nettles is naturally caffeine-free, and gradually increases energy. It does have a “kick” like coffee. Coffee may cause a brief time period of energy, but within about an hour, a person needs another cup because it tends to cause a deeper depletion of energy than when the first cup was ingested. This is why many coffee drinkers tend to drink several cups a day.

2.) Take two drops under the tongue four times per day of “Olive” by Bach Flowers. This homeopathic remedy provides a gentle energy boost, and it gives strength and courage to follow-thru on daily tasks without feeling like you are trudging through a muddy swamp.

3.) The following contain natural melatonin that will help you to sleep:

a.) a handful of tart cherries,

b.) a handful of almonds,

c.) a cup of “Golden Milk” (almond milk, a pinch of tumeric, and organic honey), or

d.) a squirt of homeopathic “Rescue Sleep” by Bach Flowers on the tongue just before going to bed.

4.) Read spiritual literature just before going to bed which deals with peace and healing.

5.) Place either one of the following gemstones beneath your pillow when you get into bed. Hold it first for a few minutes in your left hand which is the in-flowing side of the physical vessel: Lepidolite or Rose Quartz or Moonstone. You might want to create a small pouch containing all three gemstones.

7.) Do not stay up into the wee hours watching television or playing computer games or watching videos or talking on your cell phone. All of these devices have radiation levels which interfere with hormones and can, thus, cause sleep disturbances. Get into bed by 10:00 or 11:00 PM, Also, in terms of the technological devices, attach either one of the following gemstones to them which will soak-up the harmful EMFs: Shungite, Black Tourmaline, Flourite, or Lepidolite. Wear these as well during the day as pendants or bracelets.

The re-setting of planetary time lines as the space/time continuum advances is happening as intensified LIGHT surges throughout the galaxy.