The Sun Will Rise With Healing In Its Wings

The Sun Will Rise With Healing In Its Wings 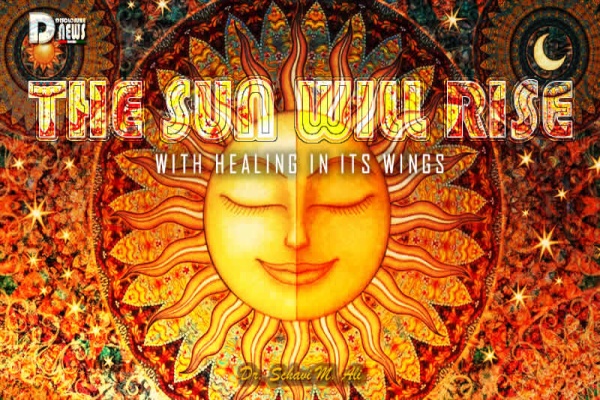 According to NASA, in the early morning hours of Tuesday, October 26th, 2021, the Sun of our galaxy exploded with approximately a half dozen solar flares.

The Sun is continuing to be activated with the potential for further “M-Class” flares. As a reminder, the flare ranges in strength are “A-Class”, “B-Class”, “C-class”. “M-Class”, and “X-Class”.

Our Earth, also known by many as “Gaia”, receives the thrust of this process and is activated at its inner core and outer field.

Its electromagnetic energy builds to a “crescendo” when the flares are heightened in strength. Often a coronal mass ejection (CME)—gaseous plasma waves— is added to the “cosmic musical score”.

However, sometimes a CME occurs without a solar flare (or flares) preceding it.

Bright colorful auroras are seen around the globe when CMEs happen as signs of its “concerto”. A “photon”—one of the aspects of solar flares as mentioned above—is LIGHT.

Because human beings, animals, trees, and all plant life reside upon our planet, it is not just the planet itself which receives the LIGHT frequencies.

All of creation receives them and is subsequently literally transformed in significant ways.

It is necessary to repeat this information which has been discussed in several previous articles as an assurance for readers that we are experiencing a dramatic and sacred “re-birthing” procedure that is orchestrated by SOURCE as a method of removing both ancient as well as current time line cellular records of disharmony.

When something is disharmonious, it is not good for a person’s (or any aspect of creation’s) wellbeing physically, mentally, or emotionally.

In love and mercy, SOURCE clears-out the records, cleanses the systems of the planet and those of humanity as well, and then re-fertilizes, re-gestates, and re-births creation; and another aspect of all of this is that Earth/Gaia is also taken higher in vibration and given greater LIGHT.

As this occurs, the planet’s “labor” can manifest as powerful earthquakes, volcanic eruptions, and weather challenges.

The powerful solar “songs” have come upon the portal of the most recent Full Moon, and any Full Moon heightens the electrical frequency of thought patterns, the magnetic frequency of emotional responses, and the resultant physical manifestations.

Over the past several days, many people world-wide have been having physical discomforts and have either handled them with spiritual and natural modalities in the knowledge of why they are occurring or have dashed-off to an emergency room in fear.

However, I have been given wonderful reports that some fully-licensed traditional medical doctors have admitted quietly to their patients that “astronomical happenings in the universe” are causing the physical disturbances.

My own naturopathic Physician and friend, who is a “Vaidya” (a Doctor of “Ayurvedic” [“Science of Life”] wellness), has shared with me that many of his clients are university-educated, fully-licensed traditional medical doctors with thriving practices.

They have admitted to him that they would not dare take the medicines nor submit themselves to certain therapeutic dangerous procedures nor advise them to family members that they suggest to their patients.

However, because of certain laws regarding their medical licenses, they prescribe the medicines (which have horrendous side effects) anyway and also suggest certain dangerous therapeutic procedures to their patients.

It brings in lots of money.

There is nothing wrong with making large sums of money, but how a person makes the money is a key part of his or her moral fiber.

It is not wise for a health care provider to prescribe to someone something that he or she would not take themselves.

We are in a “Now” where proper choices must be made as to either humanity’s elevation in spiritual consciousness or downslide into the current further “3d” chaos and confusion.

The operative phrase, as is always the case, is “free will”.

We can use it to open a golden door to blessings or to open a rusty, dirty door to a wilderness.

Our Sun is sending out vast amounts of LIGHT into our “God Particle” (pineal gland) and throughout our physical vessels, and many people are beginning to awaken to amazing wisdom, psychic knowing, and healing capabilities.

Those who have been on the elevation path for numerous decades assist others in their elevations. They are known variously as “Light Bringers”, “Light Workers”, “Light Warriors”, or “Way Showers”.

In their careers, they may be Spiritual Scientists, Yogis or Yoginis, Acharyas, Gurus, Naturopathic Doctors (or even traditional Medical Doctors with a heightened awareness), Herbalists, University Professors, or serve in other necessary capacities.

They may also be the vegan or vegetarian chefs who provide nutritious meals to their communities. Prayer and meditative rituals are also tremendous services.

Whatever the case, their “employer” is the DIVINE, and all of their needs and desires are met with ease.

When we serve SOURCE by helping creation, we are richly blessed. As we are told in one of our world scriptures: “The eyes of God are on the righteous” (Psalms, 34:15).

As we head into the New Moon on November 4th, 2021, and continuing throughout the year, solar energetics will blast, then settle for a period, then blast again.

Earth/Gaia’s magnetosphere will be filled with energy waves.

We will feel them without technological devices, although such devices help to confirm our “knowing”.

LIGHT will soar into creation with increasing potency.

As the years move on, we will increase in crystallization.

We can witness the dissolution of “3d” erraticism and turmoil without becoming involved in it.

As Sri Bhagavan Krishna has taught: “Do not fear. Those who preserve the dharma are protected by the dharma” (BHAGAVAD GITA).

The word “dharma” translates as “path” or “way”, and this Sanskrit term advises that our focus must be on SOURCE—not on the delusions of human folly.

As part of the great “Gayatri Mantra” says: “Immortal Channel…Glorious LIGHT…we meditate on Thy ray of LIGHT.”

We have 921 guests and no members online