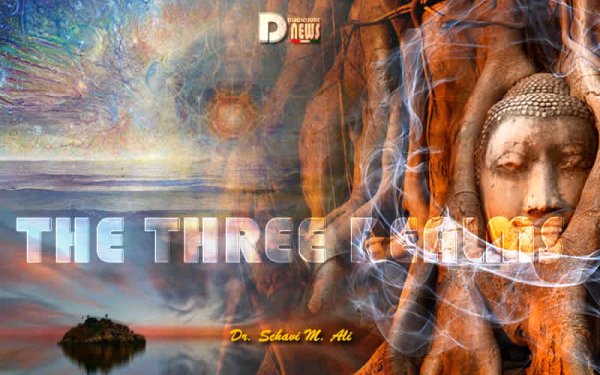 Ancient teachings tell us that there are three realms of existence.

Everything is infused with “Nyasa” or “Sacred Energy”.

Thus, to tamper with, or to disrupt the natural energetic flow, or to destroy any aspect of what we tend to refer to as “Nature” is to annihilate the aforementioned “Nyasa”—“Sacred Energy”.

If something “unnatural” is introduced into what is originally “sacred”, it can become depleted of life force or completely destroyed.

This is true whether we are discussing human beings, plant life, animals, or even a crystal or gemstone.

If such a consciousness does not become elevated to higher knowledge of the LIGHT of “all that is”, then its capability of performing great tasks which help to push creation further forward is eventually not allowed to be activated.

It may seem to still occupy space, but it will have no power.

The continual SOURCE LIGHT that is embracing our planet and entire galaxy is awakening dormant DNA and allowing newer choices to be made in how to move through the planetary journey.

The “Higher Self”—the ultimate “Guardian Angel”—is always with us and speaks via intuitive insights as well as via audio-psychic experiences which manifest as clairaudience, clairsentience, clairvoyance, and in other metaphysical ways.

It also speaks in the humble presence of animal guides such as, for example, the high-flying eagle which is a message of the high flight of the SOUL or a dragonfly which gives the message of transformation, or a beautiful wide-eyed cat which shares that mysticism is the “normal” activity of creation which can be uncovered by paying attention to what is around us, and indeed, this is why cats are relatively quiet and glide gently or sometimes scamper hurriedly as a symbol of incoming mystical information—slowly or quickly.

Everything in Nature is a message.

Except for those who are the progeny of the most ancient cultural frameworks, most modern humans do not value Nature.

They spit upon it, tear it down, slaughter it, and poison it.

There is an old proverb that says: “People who do not build will destroy”.

Thus, those who de-value our planetary home and all of its gifts and seek to control and manipulate it and all that exists upon it, are those who no longer are helping to develop it nor are they helping to continue their own life force.

When a gift is given that is not valued, it is often best to take it back and gift it to someone who will appreciate it.

This is exactly what SOURCE is doing and why Earth/Gaia is being constantly elevated to higher realms and being given greater doses of LIGHT.

The planet is being “re-gifted” to those who value “Her”.

This is also why much of humanity is being crystallized and made into the LIGHT forms that we were originally.

The crystallization process is a “fine-tuning” of our physical “instruments” just as a piano needs to be sometimes “re-tuned” or just like an entire orchestra “tunes-up” before a performance.

The ASTRAL REALM is beaming down, and the CAUSAL REALM is delivering the messages to the PHYSICAL REALM.

The ALL is working in unison with “ITS” very “SELF”!

As we head into the high point of the Mercury Retrograde between September 27th and October 18th (with the “pre-shadow” having already begun), this is an excellent time frame in which to diligently seek greater knowledge and wisdom or to add to that which we have already been blessed to learn.

For those who are so inclined and who collect malas for the chanting of various mantras, prior to the retrogradation, is an excellent time in which to acquire a new mala for chanting healing and protective mantras.

A mala (Sanskrit for “garland”) carries a continual vibrational frequency (life force) when it has been properly “seeded” which is when a certain mantra has been chanted into it for 40 consecutive days.

It develops “siddhi” or “power”.

Therefore, it is not merely an attractive material piece of spiritual jewelry. It is a spiritual “powerhouse” of energy.

Not only does its energetics continually work throughout our auric fields, but the mala also reminds the consciousness of Divine aid, and thus, our safety and assistance from higher realms.

This is why the beads of a mala that are thousands of years of age—known as “vintage”—are often re-strung on a new cord when the old cord has broken.

Many such beads were those used by a highly-vibrating Tibetan monk or Vedic Yogi (male) or Yogini (female).

Often malas are gifted to new initiates by their Gurus or Acharyas.

If the beads become damaged over time, then the mala is to be placed within the ground and thanked for its service because the substance of the mala–whether the seeds of a tree or a crystal or gemstone—all originate on the planet or have arrived onto the planet from an asteroid or comet millions of years ago such as the Moldavite or Labradorite stones.

Seasonal changes are also a good time in which to obtain a new mala, and soon in this month of September, autumn in the Northern Hemisphere and spring in the Southern Hemisphere will arrive in each of their kinds of splendor.

Let us be determined to receive the SOURCE LIGHT of reception and transmission so that our beautiful planetary home and our sparkling galactic community and their “libraries” of sacredness will unfold to us for the betterment of our journey and the strengthening of our life force.

Let us observe all that surrounds us and seek the knowledge that is held there.

Yes, of course, there are repairs that must be made to the damage that has been done to our planet; so yes, there is pollution in the atmosphere and chemtrails pouring down toxins from planes. There are foods that have been genetically altered.

There are dangerous medications being almost forcibly distributed to humanity.

There are animals being submitted to horrible experimentations for cosmetics and slaughtered for fashion.

There is subjugation, oppression and war.

Source, HOWEVER, is correcting these “sins” (a term which originally meant “missing the mark” in archery).

The “Energetic War”, the war for “Consciousness Transference”, is being won by the LIGHT.

Choose to support the “Lightwarriors” and “Lightbringers”.

They are not only the people of Higher Consciousness, but they are the individual and collective SOULS of the CAUSAL REALM created in the ASTRAL PLANE.

You are of the same creation.

Embrace the unfolding of your “New Self”.

Escalation Is Elevation,
And Both Are Our Transformation.
We Are Receiving The Beams Of Source
For Our Greater Life Force.
Light Is Brighter And Has A Faster Spin.
Our Dna Is Taking It In.
The Space/Times To Come Are Filled With Wonder.
Fear Not As The Old Is Being Torn Asunder.
A New Foundation Is Being Laid.
The Golden Age Is Being Made.
Every Flare Or Ejection From Our Sun
Is A Sign That Light Has Won.
Rejoice And Celebrate.
The New “Now’ Is Great!