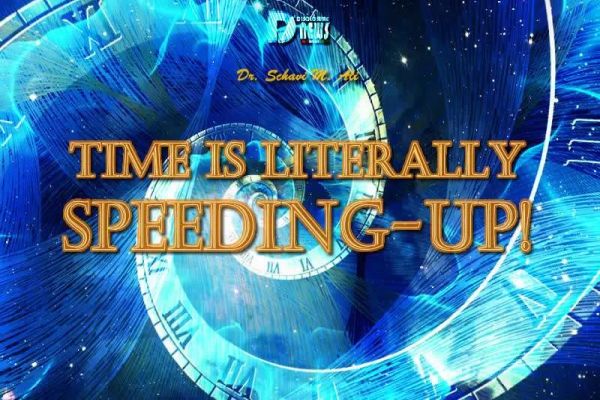 Many people are commenting about how time seems to have sped-up.

By the time that we arise in the morning, the hours swiftly move along, and it is soon late afternoon and then evening.

By the time that we go to bed, it seems like morning very soon arrives.

Sometimes people find themselves rushing to complete daily tasks before evening comes, and sometimes there is not enough time to do all that is planned.

Much of humanity is stirred-up, anxious, and exhausted.

It is not an illusion that time is moving faster.

Earth/Gaia has a faster vibrational frequency—a quicker “spin” as “She” receives greater LIGHT from our Sun and as our entire solar system continues its trek through the Photon Belt—a band of intense radiation.

According to Spiritual Science research, our planet was affected in the year 2000 A.C.E. (“After the Common Era”) in a very profound manner, and it began to receive an extremely intense amount of LIGHT causing perceptual changes in human consciousness and in subsequent lifestyles for many—in other words, an upsurge in awareness or HIGHER KNOWLEDGE.

Our planet is completing 208 million years around the Great Central Sun (“Alcyone”), and this cycle has moved in a counterclockwise motion.

We are now moving between the fourth and fifth dimensions and higher, and two other galaxies are lining-up with ours causing—along with the solar energetics—major planetary shifting.

The shifting activates our planet’s inner core and magnetic field as “She” receives empowerment from our Sun, the Photon Belt, and outer-galactic energy currents.

Thus does Earth/Gaia’s “Schumann Resonance” (vibrational frequency and amplitude)—the turn on “Her” axis and strength and stretch of the pulsations from cosmic forces (solar flares, solar winds, coronal mass ejections, etc.)—level up.

Our perception of time is, therefore, quickened as is our human molecular structure.

Think of being on a fast-moving roller coaster as it zooms up and down and around at enormous speeds.

If you are sitting on that roller coaster, you too are being zoomed up, down, and around.

When the ride stops, you are still stirred-up and have to calm down from your roller coaster experience.

You have to adjust to being on the ground, walking at a steady pace, and breathing normally.

You have to achieve “balance” and become “grounded”.

Think of what is occurring with our planet’s swifter movement as a metaphorical continual “roller coaster ride”.

Our physical vessels, emotions, and mindsets are changing in order to be able to handle the “ride” because this planetary “roller coaster” is not coming back down.

The spiraling up and down and around are dimensional shifts and clearings and cleansings.

Here is the equation that we must understand:

As has been said in the ancient EMERALD TABLET: “Time is an illusion of the senses. The past and present are always with us” (Tehuti).

Thus, time is a spiral—ups and downs in experiences–the turn of the “Yugas” or “Ages” as discussed in Vedic scriptures, and all that has transpired in our realm is recorded in the eternal circumference of circles which comprise the cosmos—its “Akashic Record”.

Consider this verse from the BHAGAVAD GITA: “There is no such thing as inaction, for all universes are in constant activity, and there are multiverses of universes.” (Sri Bhagavan Krishna).

As we decide to release the “3d” daily political, philosophical, and sociological chaos and learn about the “ride” of the cosmic “roller coaster” and how to adjust to its higher vibrational energies, the quickening of time will not seem so daunting, but rather, we will realize that perhaps it is a Divine blessing that is quickly ushering us into a greater age—a “New Golden Age” —so that the “Paradise on Earth” that is often spoken of in the various scriptures of the world manifests as reality and not merely as wishful thinking.

The “New Golden Age” is actually in existence in another dimension that has yet to be reached in the current space/time continuum that mankind on Earth/Gaia is dealing with currently as war rages and as economic problems occur and as dangerous medicine is forced upon the world and as certain aspects of science attempt to rival SOURCE and as famine moves through particular sectors of humanity and as lying, cheating, hating, and stealing are the “norm” for many of the “3d” realm.

SOURCE will not allow the destruction of “ITS” creation and the constant misuse of free will.

The “Akashic Record” is being cleared and cleansed too.

SOURCE LIGHT will increase “ITSELF” to place focus on what is being removed, and the LIGHT is quickening in “ITS” movement.

Time is quickening because of the LIGHT.

We have 1200 guests and no members online