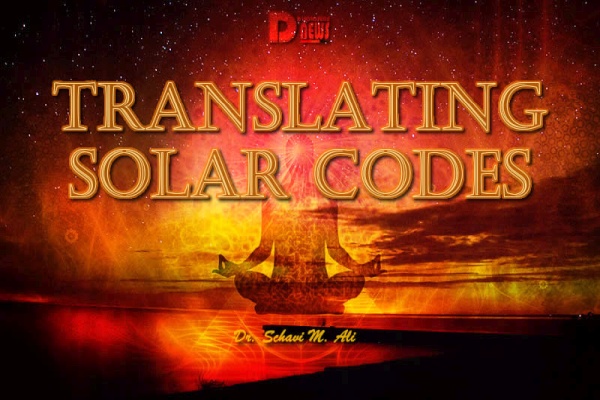 The blasts of LIGHT from the Great Central Sun onward to the Sun of our specific galaxy and through to Earth/Gaia carry enormous sacred codes of enlightenment.

They are, of course, not written out like glyphs of various languages which we read in documents, newspapers, on the computer screen, and in books; nor do we hear a booming audible voice loudly proclaiming Divine principles like the voice of God orchestrated by Hollywood (USA) in the movie “The Ten Commandments” shown every year starring the famous actor Charleton Heston playing the part of Moses.

“Things which do not appear, are hard to believe” (EMERALD TABLET).

Thus, we do indeed receive knowledge via LIGHT and SOUND transmissions far exceeding human analysis in the logical sense which also cannot be adequately measured via technological equipment even though such devices can provide us with a general idea of various kinds of cosmic events and their potential activations on our planet.

As the Physicist, Dr. Nicola Tesla, stated (who acquired a spiritual orientation after years of study of the cosmos): “If you want to know the secrets of the universe, think in terms of Energy, Frequency, and Vibration.”

SOURCE is the creator of ENERGY (life force), FREQUENCY (the number of times a phenomena occurs in a specified interval, the rate of movement of an event, the strength of life force), and VIBRATION (oscillation or movement of energetic currents). All of these constitute LIGHT.

“Spirit is diffused through the veins and arteries and causeth movement” (EMERALD TABLET).

Thus, we are LIGHT in our original essence, and we are receiving intensified LIGHT in order to regenerate, revitalize, and renew sufficient doses of LIGHT so that we can transform linear thinking and material focus to spiral consciousness and spiritual elevation.

In other words, the space/time continuum, as taught in the oldest of scriptures, moves up and down like a spiral as collective consciousness shifts in thought, feeling, and action.

These are the “Yugas”—the “Ages” of leveling up and down as earthly experiences and galactic experiences intertwine in EFV (Energy, Frequency, Vibration).

Because we are in the final phases of the chaotic era of “Kali Yuga”, collective consciousness is a mixture of material confusion as well as spiritual development.

There are those who seek to hold onto cultural, racial, philosophical, sociological, religious, etc. patterns which are familiar and comfortable, and there are those who are understanding more and more that a shift of the ages is imminent and that old paradigms will not be allowed to continue.

Part of the shift is a backwards look at ancient teachings which have foretold of the current “Now” and which are also the foundational principles upon which creation has been encouraged to remember.

This is why increasing numbers of scientists of various university degree levels (Physicists, Astrophysicists, Chemists, Biologists, etc.) are searching the ancient scriptural teachings of such civilizations as Kemet and Bharata— which gave us “Kem Sesasta” (“Potent Mysteries”) and “Sanatana Dharma” (“Eternal Path”) and why these civilizations are so often referred to in such articles as this as well as in books.

It is the root of a thing which must be properly nurtured in order for the full maturation of a thing to be actualized in strength and beauty.

Just tossing seeds out randomly onto the ground in a dark wilderness will not eventuate into what we may have had in mind as they were tossed.

Because of the scientific understanding taught in Physics that “Life will find a way”, the seeds will certainly become something, but not what may have been intended. In fact, in the movie “Jurassic Park”, the actor Jeffrey Goldblum who plays the part of a Physicist, makes this exact statement.

The life that solar codes offer us are penetrating every system of our being: every aspect of the nervous system, cardio-vascular system, endocrine system, lymphatic system, digestive system, eliminative system, reproductive system—all of our chakras (every muscle, gland, and organ)—our skin (every pore)—and the key component of our communication between the ethereal realms and this planet which is our “God Particle” (the Pineal Gland).

Solar flares, solar winds, coronal mass ejections and more—all play their roles in sending LIGHT to the planet and throughout our specific solar system.

These can be tracked in their lift-off and in their expected arrival.

However, SOURCE LIGHT is surging into our planet and throughout the galaxies and universes in a manner that can only be sensed or felt with the intuitive faculties of the HIGHER SELF—the SOUL before, during, and after “ITS” pulsations have come.

The physical body, mind, and emotions are activated in certain ways, and Earth/Gaia is as well.

Again, these are the “Light Activation Symptoms” (LAS) which are so often discussed which are the clearings of old programming (ancestral and current), cleansing of cellular records, and acclimations to the strong LIGHT.

Repetition is an ancient teaching method.

Certain types of knowledge must sometimes be repeated in the “Age of Chaos” (Kali Yuga) because in such a time/frame there is so much distraction that alters the Energy, Frequency, and Vibration of the collective consciousness and turns it away from SOURCE.

Ancient scriptures teach that in such a time, only one-fourth of all humanity truly is elevating higher in consciousness and that the other three-fourths remain ignorant and confused. However, during the final phases, the percentage of those who try to elevate increases, and eventually the next age whereby one-half of humanity is elevating ensues.

This approach began last year on December 21, 2020 when the planets Jupiter and Saturn aligned in the constellation of Aquarius in the Tropical Zodiac and in Capricorn in the Sidereal Zodiac.

What is being touted as the “Age of Aquarius” is the opening of a significant window of change so that the “New Golden Age” can eventually arrive.

The point that many people are missing is that in a true “New Golden Age” (which is known as “Sattva Yuga” in Sanskrit which translates as “Age of Peace”), there are no clearings and cleansings which need to be done because all dross is “washed” away.

There is peace everywhere, perfect health, financial prosperity, tropical weather in all areas of the planet, people living for several hundreds and even thousands of years (with some even reaching immortality), and amazing spiritual capabilities.

As children often say when they are being taken on a joyful trip by their parents: “Are we there yet?” anyone reading this knows the answer to that.

Trying to act as if there are two Earth/Gaia planets developing—one where everyone is happy and partying and one where there is density and depressive circumstances is delusional.

The planetary shift is in terms of Energy, Frequency, and Vibration of CONSCIOUSNESS!

This is what will create a new earthly existence.

Many are on the “Highway of Light” heading for this goal and are meeting others going in the same direction as arrival at each “station” occurs.

The “stations” are levels of consciousness.

SOURCE is the transportation by which we travel.

As we gaze at the Sun of our galaxy, it many times glows with colorful out-pouring rays, sometimes has a bluish center, and is often just bright pure intense light whether we are in the Northern or the Southern Hemisphere.

By nightfall, it still shines, but we do not see it with our material eyes because dark sapphire blue has become awash upon the canvas of the sky.

This is a message that within the darkness of our very physical vessels is LIGHT because cells are surrounded by LIGHT.

At the moment conception a flash of LIGHT occurs.

So, the “gestation” period of the “Age of Aquarius” is creating increased numbers of awakenings. The “quickening” is at hand.

Our “pregnancy” may be uncomfortable at times as we “expand” with our own “selves” being nourished by solar codes.

Prayer and meditation will be our spiritual “comforts” as we await our “arrival”, and natural therapies such as organic foods, spring water, essential oils, herbs, homeopathic remedies, relaxation, etc.—all that has been discussed before—will be the best “supplementation”.

We will also experience strange psychic occurrences such as seeing double and triple numbers at various times in certain places, having inspiring dreams, meeting people with our same desires for higher knowledge, and coming upon higher teachings in books or in documentations which may often seem to be coincidental; but we must remember that there are no coincidences.

Solar codes are translated by becoming transformed in consciousness which leads to a different way of being—our thinking changes; our emotive responses change; our actions change.

We cease being caught-up in a cycle of judgement via culture, race, religion, philosophy, etc.

As we know, we have free will.

Because of this, there will be some people who will “abort” this “re-birth”.

They think, feel, and act in ways that are in keeping with old programming.

They will dismiss all of the talk about LIGHT as ridiculous and a mere fairy tale.

Yet, there will be a nervous stirring in them which is their sub-conscious asking: “Could any of this be real?” This will be where their “fork in the road” will materialize.

As some people say in a vernacular sense: “How’s that workin” for ya?” Becoming infused with greater LIGHT involves some work on our parts similar to completing assigned studies in particular courses before being granted a college degree.

SOURCE is rather generous.

People are allowed to “re-take” a course in “LIGHT RECEPTION” if they were not prepared initially to understand certain necessary concepts.

This is one of the blessings of the “Age of Aquarius”—an opportunity to shift.

The operative word is “opportunity”.

Eventually, the “SHIFT OF THE AGES”—the door to a “New Golden Age”— will open.

Solar codes are preparing us for this new space/time continuum.

We have 1602 guests and no members online