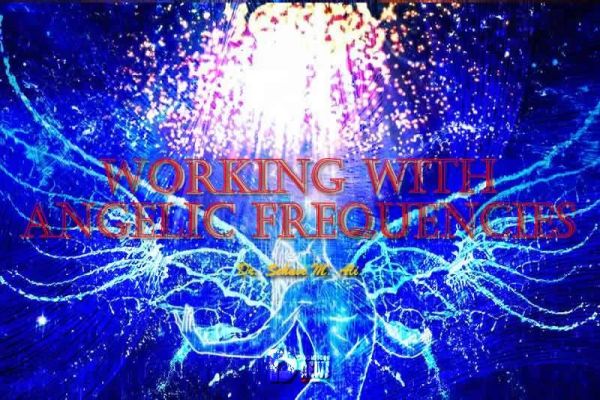 In the ancient Kem Sesasta (“Potent Mysteries”) of Kemet, there are “Neteru” (“Divine Forces of Nature”)—angels.

In Judaic and Christian tradition, there are Raphael, Michael, Gabriel, Mumiel, and many more—angels.

Numerous other religious and spiritual traditions believe in and teach about angels.

In many cases, they are artistically rendered in human form with wings, and unfortunately, most are depicted as European/Anglo/Caucasian looking with blonde or light brown hair and blue eyes.

When such depictions are pointed out, many times the person doing the pointing out is accused of being racist, but interestingly, when the trend towards depicting angels as looking like what many may say are “white people” is not discussed and simply accepted, then nothing is said because humanity is expected to accept the “norm” or be criticized for not doing so.

I do not like racial terminology because it was designed to divide humanity long ago.

However, for modern-day discussion purposes, we tend to use certain sociological racially specific words and phrases.

In all Divinely revealed holy texts which speak of angels; however, they are beings of bright LIGHT which can take-on form for specific purposes—even if these forms are racially-specific if necessary.

Television has not helped, however, because in most programs where angels are involved, the actors or actresses portraying them are so-called “white” people.

Thus, does most of humanity keep itself locked into division, hatred, and warfare.

Those who speak with a spiritual orientation are considered as being “other worldly” or “unrealistic.”

Time is out for hiding the TRUTH and for tiptoeing through certain discussions because our planet is in turmoil, and ANGELS—by whatever name or title people may want to call them—are trying to assist us.

There is much focus upon our having been gifted with free will.

According to how we ply it, we draw to ourselves particular circumstances or experiences.

Interestingly, it is taught in most sacred books that angels must be invited.

They may at times gently give us “signs” that they are in our midst, but for them to charge into service, we must invite them to do so.

If we have a daily regular spiritual practice of prayer and meditation, they come quite readily when we need them because our supplications into the Divine realms via our prayers, tends to serve as an invitation for them to always be available to us without specific invites.

There are angels for healing, protection, knowledge acquisition, financial help, career success, and more—even those who are assigned to govern the heavenly realm of stars and planets.

ANGELS ARE ASPECTS OF SOURCE—THE DIVINE ABSOLUTE—THE INFINITE PRESENCE—THE ALL!

Therefore, it is our ULTIMATE CREATOR who often takes-on form to assist us.

In the Vedic tradition, when we beckon to a specific “aspect” of the Divine, we are calling upon GOD in “Saguna” (“with form”). When we call upon the Divine without a particular mental image, we are applying “Nirguna” (“without form”).

In these current times when mankind is so in need of heavenly assistance—especially in this time frame of the “Twilight of Kali Yuga”—when planetary conditions are most dire but also at the same time filled with opportunities to elevate in consciousness—it is helpful to employ certain “material” items for calling upon the angels.

For example, when people chant mantras with prayer malas, they are calling upon specific aspects of the Divine known as “Devis” and “Devas” as mentioned above—the “Lighted Beings,” “Shining Ones”—angels!

However, there is another method that can remind us of the fact that angels are “standing at the ready” to help us. It is very simple but extremely powerful.

Take a deep breath; then silently or aloud say:

The blank line represents your statement of need. You can also say:

Again, the blank line represents what you are asking for in terms of help and guidance.

Let us remember a linguistics lesson that has been offered previously. The word “angel” is from the Sanskrit term “anjali” which translates as “offering” and as “to pray.”

Thus, when we “offer” prayer, we are beckoning to the angelic realm—to SOURCE—to “ITS” aspects.

There is ONE SOURCE—neither Sanatana Dharma of the Vedic world nor Kem Sesasta of the Kemetic world are/were “polytheistic.”

They are/were “monotheistic.” It is time to stop overlaying “Westernized” philosophical and sociological frameworks onto ancient spirituality.

The Sun shines on Europe just like it shines on Africa and Asia.

It does not merely hover over an island someplace or only within a certain continental area. Likewise, the cosmos is the multi-versal heavenly realm of all planets, solar systems, galaxies, and universes.

So too, are the aspects of SOURCE—of GOD—for all of creation—not for a specific group. One of the ways in which to engage the “New Golden Age” is for mankind to stop dividing itself (even subconsciously) via racial types and terms.

This is not to say that mankind has not done horrible things to certain so-called “races” over many eras of the space/time continuum.

However, when will the hatred end? When will racism cease? Will it take a global cataclysm? Will mankind need to be brought to its knees?

This article is not meant to instigate debate or fear. Its purpose is to draw out LIGHT from darkness—TRUTH from falsehood.

Cosmic energetics are becoming increasingly intense almost daily. DNA and cellular records are being scraped, scrubbed clean, and remade. I question how many are truly willing to be cleaned up.

Many may want to continue to wallow in filth.

However, unlike the childhood game, the LIGHT is not chasing us around a yard or down the street.

“IT” is zooming straight into us. Buckle up! Humanity is in for a ride of TRUTH that will leave many blinking their eyes and opening their mouths in awe.

Angels of LIGHT are metaphorically arriving like troops soaring down from helicopters.

Many of us are calling them in with our free will to be the “boots on the ground.”

We have 3748 guests and no members online