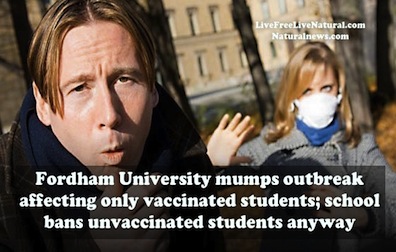 (NaturalNews) One of New York's lesser-known institutions of higher learning is making headlines after 13 confirmed cases, and counting, of mumps emerged on two of its campuses, prompting school officials to impetuously ban all unvaccinated students from attending classes. But these same reports clearly indicate that all affected students had already been vaccinated for mumps, proving once again the utter uselessness of vaccines and the imbecilic tendencies of organizations chained to the vaccine status quo.

According to reports, concerns first arose after several Fordham University students suddenly came down with flu-like symptoms in recent weeks, which later turned out to be adult mumps in every case. The infection numbers continued to swell, prompting an inquiry into the vaccination records of the affected students. But this inquiry revealed that not a single unvaccinated student had contracted the mumps -- only those who had previously been vaccinated for mumps developed the disease.

Nevertheless, Fordham officials have decided to prohibit all unvaccinated students, none of whom have contracted the disease thus far, from attending classes unless or until they agree to provide proof of vaccination. At the same time, all the vaccinated students who contracted mumps are being allowed to continue attending classes after exceeding the supposed contagious stage, a completely irrational policy move that only unfettered adherence to mainstream vaccine dogma.

"All of the students who were tentatively diagnosed with mumps had been vaccinated," ABC News reported. "Vaccinations do not offer 100 percent protection."

Vaccines don't work, admits Fordham, but you must have them to attend classes

While both school and public health officials admit that the vaccine does not work for everyone, Fordham is still insistent that everyone receive it regardless. In a show of tyrannical ignorance, Fordham officials recently issued a public demand that all students be vaccinated for mumps, and those who have already been vaccinated receive booster shots.

So to recap, a university in New York reports 13 cases of an illness that should not have emerged because every single person who caught it had previously been vaccinated, and the school decides to punish the unvaccinated by denying them an education, all the while welcoming back with open arms those who caught the disease, and who might still spread it to other students.

Nothing about this type of scenario is at all reasonable from a logical perspective, as any rational-thinking person who has not been brainwashed into the vaccine religion will clearly see that vaccines do not work and actually reduce immunity. And yet in our demented society this type of decision-making is considered par for the course and a reasonable response to handling infectious disease outbreaks among the vaccinated.

"[N]atural immunity last[s] a lifetime," states one ABC News commenter about the benefits of not getting vaccinated. Deconstructing yet another plank in the pro-vaccine house of cards, he added that vaccination lasts "2-10 years initially and then 2-3 years on boosters. This means that the adult population has not been immune to MMR, Whooping Cough, Flu, etc... for the last 50 years, and yet there have been no epidemics."

"It is a money making, but deadly dangerous, racket bringing billions to Big Pharma and their paid political stooges."

We have 1961 guests and no members online