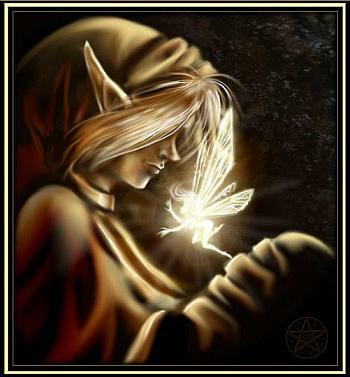 Fairies are the Little People, said by some to be the dispossessed early tribes of the British Isles. They faded away into uninhabited places, growing smaller and smaller with time as they were forgotten and passed into legend. Oral history informs us that the Tuatha de Danann, People of the Goddess Dana, ruled Ireland before the Milesian invasion. They are said to have been driven underground, where they became the Daoine Sidhe fairies.

Other theories hold that fairies are supernatural beings, fallen angels trapped on earth, spirits of the heathen dead, elementals, nature spirits, visitors from an alternate or parallel universe, or old god/esses who have been so neglected that they have lost their powers and devolved into fairies.

Myths and legends provide a lot of information about fairies. These are some of their supposed qualities and attributes: 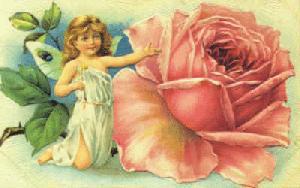 May be winged and fly

May be tiny, or child-sized

Can turn invisible, or blend so closely into the forest as to seem invisible 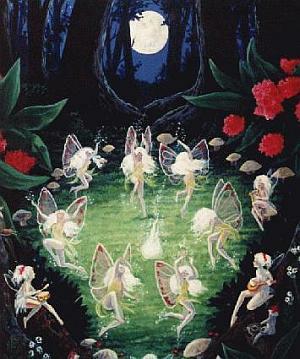 May be male or female, helpful or harmful

Have powers of magic and enchantment

Brawl with each other

War with insects and reptiles

Are associated with certain plants, trees and places

Can breed with humans

Create artifacts, such as shoes and bows

Helpful:
Bestow gifts - Fairy gifts include the cauldron of plenty, the wand of intelligence, and the tree of knowledge
Assist with housework

Harmful:
Steal babies and replace them with changelings
Borrow household items from humans
Enchant humans and beguile them into the fairy realm 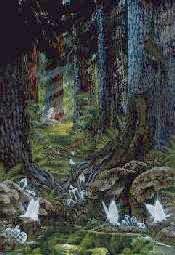 Live on hills, in woody dells, underwater, or in the Otherworld

Fairyland, also called Elfland or Tir Nan Og, is an enchanted place where fairies live in an organized community. It may be thought of as an alternate or parallel universe, a place where time stands still and there is no sickness or death. The fairy kingdom is said to be a hilltop one, but invisible, or composed of magnificent underground cities. Fairy kings and queens rule there.

Humans who enter the fairy realm cannot leave once the door closes behind them. Those who do leave may find that years have passed on earth during what was, for them, but minutes in the fairy kingdom.

Shapeshift
Cause fog and tempests 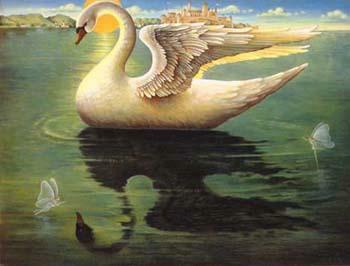 Knowing a fairy's true name gives you power over it, so fairies are said to guard their real names very closely. Nevertheless, individual fairies known to us from mythology include: 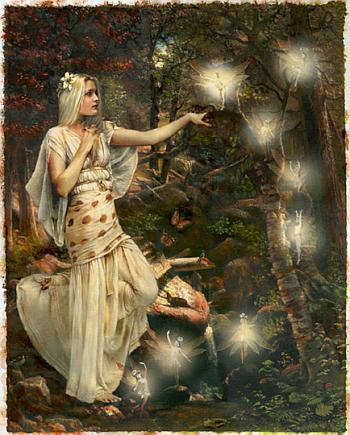 The fairy godmother is a stock character of fairy tales. She appears alone or in a group to bestow gifts, usually on newborns. Sometimes she acts like a guardian angel.

Fatae, one of the names for fairies, derives from Fata/Fatae, the Fates. This Roman Triple Goddess appeared at the birth of kings and notables to decree the child's destiny. The archetype is much older, going back at least as far as Egypt where the Seven Hathors appeared upon the birth of a child to bestow gifts and divine its fate.

"There are other forms of life as well as ours whose sphere of evolution impinges upon the earth. In the realm of folk-lore we constantly meet with the idea of intercourse between the human and the fairy kingdoms; of the marriage of a human being with a fairy spouse, or the theft of a child by the fairies, an impish changeling being left in its place. We shall be rash if we assume that an extensive body of folk-belief is entirely without foundation in fact."

WHEEL OF THE FAERY YEAR

Festival of river nymphs and water fairies, a dangerous day for swimming.

Fairy hills and dwellings are revealed on this day.

Doors open between our world and the fairy realm.

Another day when it is possible to catch a glimpse of fairyland.

Festival of the blackthorn fairies.

We have 1121 guests and no members online