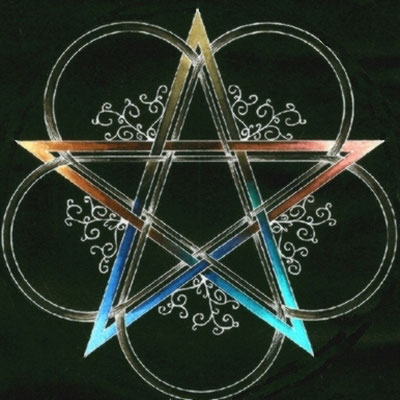 The Pentagram and Pentacle are commonly the most famous symbols of Witchcraft, and are symbolic of the power of Spirit as the overriding power controlling elements.  As the cross is to Christianity and the six-pointed star to Judaism, so the pentagram is a symbol of the magickal craft of Witchcraft.

The Pentagram is an image of an up-right five-pointed star (single point on top) drawn inside a circle with a single continuous line making the five points equally spaced.  To a witch or magician the pentagram image is symbolic of the mysteries of creation.  As such for use in rites and rituals,  the image is commonly drawn, etched, carved or inscribed onto a round disc called a Pentacle.  A pentacle can be made from a variety of materials such as:  wood, clay, copper, brass, silver or gold, and is placed centrally on the altar as a focus of attention.  Magically they are used in rites and rituals for consecration, evocation, transformation and banishment.

Many witches make their own pentacles, which can be as plain or ornate as they choose.  They can be decorated with pieces of stained coloured glass; stones or gems with due regard to their correspondences, or personalized by adding appropriate symbols, runes and sigils that have special meaning to the practitioner.  By doing so, many are designed and used for a particular purpose or intent.  Many people wear a pentacle pendant or ring as a sign of their interest in occult and spiritual matters.  Many also wear them as specially charged amulets or talismans.  For instance a pentacle crafted from silver may represent the Moon’s female energies and psychic forces, the same made in gold may represent the Sun’s male energies of power and strength.

During ritual and magical workings, the pentagram is often symbolically drawn in the air using the athame or sword, this is done to either invoke or banish specific energies.  Traditionally four of the five points of the pentagram has been attributed to the four sacred elements:  Earth, Air, Fire and Water, with the fifth point (uppermost) representing Spirit:

Earth:  Is represented by the lower left hand point of the star, and is symbolic of Stability and Physical Endurance.

Fire:  Is represented by the lower right hand point of the star, and is symbolic of Courage and Daring.

Water:  Is represented by the upper right hand point of the star, and is symbolic of Emotions and Intuition.

Air:  Is represented by the upper left hand point of the star, and is symbolic of Intelligence and the Arts.

Spirit:  Is represented by the topmost point of the star, and is symbolic of Deity the Divine, and the All that Is.

The Circle around the star represents sacred space, in which the spirit (the fifth element and top-most point of the star) controls the four earthly elements.  The four elements are also associated with the cardinal points of the compass i.e. Earth is to North, Air is to East, Fire is to South and Water is to West, and it is to these directions that the pentagram is drawn to invoke or banish their requisite energies.  Many witches use this method to invoke the rulers of the four quarters, so that they may protect and watch over their proceeding (see Circle Casting).

The invoking pentagram is drawn with five flowing strokes of the atheme or sword, or if you don’t have them the use of your right forefinger will suffice.  Point the atheme in front of you in a position roughly aligned with the centre of the forehead, sweep rhythmically from forehead to left foot (1), to right shoulder (2), to left shoulder (3), to right foot (4), back to forehead (5 – see diagram).

The banishing pentagram is drawn again with five flowing strokes of the atheme but in reverse order.  Start at the left foot and sweep rhythmically to forehead (1), to right foot (2), to left shoulder (3), to right shoulder (4), back to left foot (5 – see diagram).

With this method of calling the quarters and while working with magick, the witch is using the pentagram as a symbol of protection and positive power.

Pentagrams can also be using during Craft meditation exercises, in that the points of the star can represent various elemental energies, spirits or deities.  The upper fifth point can be seen as the ruler of the higher mind over the lower elements of our being.  It can be visualized as the awakening of our conscious mind to the beginnings of our own human psyche, and then moving beyond the realms of physical form and our limited five senses, to explore the infinite possibilities that exist within the Universe.  Try it, sit in a quiet place with a pentacle on your lap, start with the lower points of the star and work your way through each Element to Spirit, then go beyond and see where it takes you.  By meditating thus, the next time you place the pentacle in your circle, you may well find its energy is more readily focused and directed.

“It is the goat of lust attacking the Heavens with its horns.  It is the sign execrated by the initiates of a superior rank, even at the sabbat,” say’s Levi.

The inverted pentagram has also been used to represents a second-degree status of rank in some traditional groups of witchcraft.  However, due to its association with Satanism and black magic, many traditions have since substituted other symbols, such as the triangle to represent the same degrees.