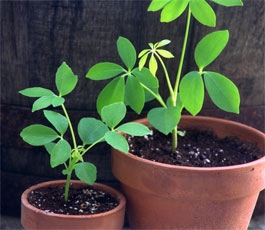 Do plants communicate by using telepathy?

This interesting question was raised by recent research published in the Australian journal “BMC Ecology” suggesting that plants seem to react to slight noises — generated inside the cell — to talk with each other. And what does this mean for humans?

Those who believe in parapsychological phenomena, like telepathy between humans, haven’t been able to provide utter proof that the unconscious or conscious sending and receiving of mental and emotional signals called telepathy is actually possible — but even if it is, we don’t have a hint of what mechanisms would explain it.

Senior Scientist at The Institute of Noetic Sciences, Dean Radin, has suggested that quantum mechanics will provide an explanation of how telepathy works. Maybe delving deeper into the way other organisms communicate will also help us sort out the mystery of telepathy among humans.

A recent study found evidence to support the idea that plants communicate with each other through sound waves.

After observing how plants affect each other’s growth, Monica Gagliano and Michael Renton from the University of Western Australia proposed that plants communicate through sound waves (inaudible for humans) or nanomechanical oscillations, which are precisely within the realm of quantum mechanics.

Nanomechanical oscillations are vibrations on the tiniest atomic or molecular scale.

The researchers noticed that chili seeds (Capsicum annuum) grew better in a locked container in the presence of basil (Ocimum basilicum) but were hindered by the presence of fennel (Foeniculum vulgare), suggesting that the growing environment had less effect on the development of the seeds than the way plants interacted with one another.

Gagliano and Renton said that “seed germination was positively enhanced by the presence of a ‘good’ neighbor, even when the known signaling modalities were blocked, indicating that light, touch or chemical signals may not be indispensible for different plant species to sense each other’s presence.”

Gagliano had already published findings last year of corn roots producing clicking sounds in the 220-Hertz range. The article appeared in “Trends in Plant Science.” She also found that, when suspended in water, corn roots tended to lean towards vibrations of the same frequency range.

Are we all interconnected?

Some studies suggest that plants communicate with each other through vibrations.

Quantum mechanics teaches us that Earth is a sea of vibrations. Humans and animals respond to different frequencies. Even bacteria can signal one another with vibrations.

In 2011, researchers Allan Widom and colleagues from Northeastern University in Boston published findings showing that single-celled bacteria like E-Coli might communicate with each other by using radio waves. They calculated that the transition frequencies between these energy levels correspond to radio signals broadcast at 0.5, 1 and 1.5 kilohertz, same frequencies as those used in AM and FM radio transmissions.

Researchers have also discovered that bacteria can communicate by using a chemical language called “quorum sensing,” which allows them to act as a synchronized group.

The idea that plants communicate is not totally novel. In 1973, explorer Lyall Watson published “Supernature: A Natural History of the Supernatural,” where he suggested that, plants responded sympathetically when a live shrimp was thrown into boiling water.

People have been talking to plants for ages. Native Americans’ herbal medicine, for example, is based on some form of communication with plants. Bach flower remedies are also based on the capacity of a healer to communicate with the flowers and ask them to render their healing properties.

Discovery Channel’s MythBusters Tory Belleci, Kari Byron and Scottie Chapmen studied the effect of either praise or cruel insults on separate greenhouses while using another greenhouse as experimental control for two months. To their own surprise, the silent greenhouse produced lower biomass and smaller pea pods than the other two. Kind words or insults didn’t seem to make a difference, which seems to prove that it is sound the plants respond to.

Plants can also react to light, and some use allelopathy to communicate with each other.

First used in 1937 by Austrian professor Hans Molisch, the term allelopathy describes a biological mechanism by which one organism produces chemical substances that influence the growth, survival and reproduction of another organism. Chemicals released into the soil or air by roots or leaves may alert other trees that it’s been eaten so that the others can speed up their production of chemical defenses. Allelopathy is found not only among plants, but also among bacteria and fungi.

Bielefeld University Professor Dr. Olaf Kruse and his team published, last year, in “Nature Communications” that green algae can draw energy from photosynthesis and from other plants.

If this type of communication through light, chemicals or sound waves cannot be called telepathy, then maybe it will still ignite the imagination of those who believe that we’re all connected in pretty much the same fashion as the planetary brain depicted in the “Avatar” movie. In Pandora, the conquered moon, there is a vast neural network through which the humanoids Na’vi and other beings can connect. You might remember seeing the image of interconnected plant roots rapidly exchanging information.

In planet Earth, as we now know, entire forests are indeed interconnected by networks of underground fungi (Mycorrhizae). Would it sound too off to imagine that plants might be using acoustic signals to transmit information through this web?

Psychologist and energy healer Dr. Olivia Bader-Lee thinks that the result of these experiments with plants will also confirm that humans can share some form of energy.

“The human organism is very much like a plant,” she said. “It draws needed energy to feed emotional states, and this can essentially energize cells or cause increases in cortisol and catabolize cells depending on the emotional trigger.”

back to top
Slavery: A Closer Look
The Business of Healing
Tribute to Dolores Cannon – (October 18, 2014)