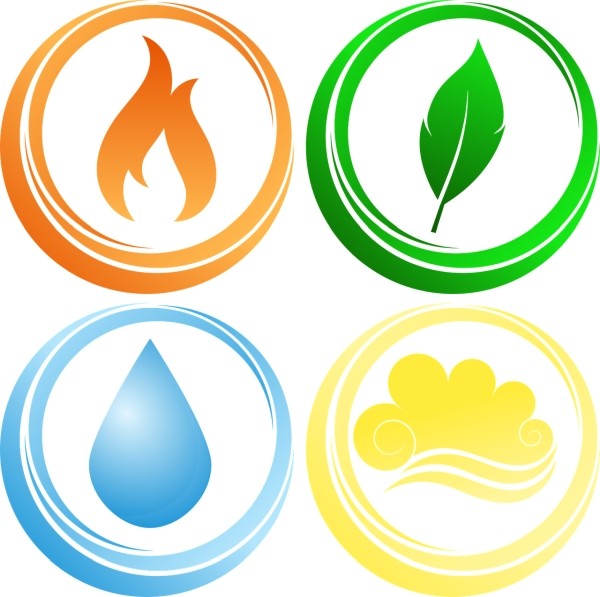 The three building blocks of the multiverse are Truth, Love, and Energy: supreme intelligence, magnetism that draws everything together, and fuel that activates all the atomic and subatomic structures into motion. Without any one of these there would be no universe as we know it.

We find these three elements in our bodies as brain, heart and gut or as intellectual center, emotional center, and moving center. The number three is unstable like a three-legged stool. Instability creates movement, drama, activity that we call life in this universe. In symbolic form this looks like +, -, o or positive, negative, neutral. To stabilize these three, we can add a fourth ingredient. For example, we can add carbon to oxygen, nitrogen, and hydrogen.

So, four elements: Earth, Air, Fire, and Water are the four building blocks of our physical planet and everything on it and together these four elements offer some stability to our experience. This is what this article focuses on. While these elements are powerhouses easily witnessed in the oceans and rivers, volcanoes and forest fires, tornados and hurricanes, and earthquakes and avalanches, they are also present in subtle ways in every part of the planet from the makeup of our bodies to our energy needs, transportation, food, shelter and many other aspects. They are literally everywhere we look. What many people do not realize is that because these four major elements make up our bodies – we are directly related to all the phenomenon that takes place on the planet. That is, we are affected by the elements and the elements are affected by us. Therefore, massive floods, for example, are not a random accident but deeply related to what humanity is going through psychologically, emotionally, mentally, and spiritually. The same is true for massive demonstrations of all the elements, usually involving imbalances in nature, too much or not enough water, too much or not enough heat, severe movements of earth, or too much or too little wind. The elements and how they behave is our mirror or echo to understanding what is going on for us either locally or as a species.

With climate change there is an increase in the destructive aspects of the elements all over the planet. Recently hurricanes and typhoons have become more massive and frequent, raking over the United States, Central America, the Orient, the British Isles, and Western Europe. Destructive tornados, massive fires, and unprecedented flooding have been wreaking havoc in the United States. Destructive fires have been burning down Australia and decimating the Amazon rainforest, what has been described as the lungs of the earth, the capacity to purify the air.

The last two years the coronavirus has been spreading throughout the world with its hallmark deadly pneumonia killing millions of people. The element of air is involved in all of these incidents. The coronavirus affects our breathing and, in some cases, kills us through the inability to breathe. The lungs are deeply affected and for humans, breathing is related to several things beyond supplying us with oxygen. The lungs, for one, hold the emotion of grief. Our lungs are involved when we are sad and sob involuntarily. When we are deeply saddened our lungs heave and we can barely catch our breath. Allergies that affect the lungs are related to acutely held grief that may be many years in the making.

While all humans experience grief, men are more stuck around it, especially since there are so many cultural taboos against men expressing their grief. Men tend to store it up and the result is that men are often loaded with grief and don’t know it. Is it any wonder that more men die of covid 19?  We could say that the coronavirus and illnesses like it are related to the lack of expression of men in the world. Men tend to be isolated socially and because of their competitive natures do not bond with one another in quite the same way as women. When they do bond it is often over sports, war, and other violent activities. All that pent-up emotion has to go somewhere and since nature is responsive to us it may go into floods, hurricanes, earthquakes, fires, and pandemics.

Our breathing in a spiritual sense is also related to inspiration and receiving Spirit into our bodies. Since we are currently so cut off from nature that we do not understand our relationship to it, our breathing is further affected. In other words, we impact the planetary climate through our conflicts and states of health and we are deeply affected by these very elements as they wreak havoc on us. Climate change is not just out there. We are undergoing climate change personally and as a species and we witness it in our weather patterns and changing conditions. We are one, mirrors of each other impacting one another.

The Tibetan Buddhists have some fascinating perspectives about the four elements and our relationship to them. They describe the states in between lifetimes as bardos. Since this is a complex topic, I will greatly simplify here and refer to the fifth bardo that opens up after physical death and offers the possibility for illumination or on the contrary, for confusion and distortion. Humans who meditate during their lives have a much better chance at illumination during this passage. Those who have not practiced or are ignorant of the bardos are more inclined to struggle with hallucinations and a rather difficult transition to the sixth bardo which, according to them, has to do with the experience of preparing for rebirth into a fresh lifetime.

Right after death we may be confronted by different versions of the four elements. For someone who is not prepared, the four elements show up in their catastrophic or wrathful forms. For example, the element of water may show up as a massive tidal wave or tsunami coming right at us. The element of fire shows up as a raging inferno about to engulf us and so on. This of course generates tremendous fear and the suffering can be acute. This is because we don’t recognize the elements as our allies. We see them as other than ourselves attacking us. As soon as we do recognize these elements as allies they instantly calm down and transform into their beautiful forms that instead of a tsunami appears as a gentle and peaceful meditative pond with lily pads and lotus flowers floating on the surface. The inferno transforms into a beautiful candle or lantern that gently lights our way and so on. So, what the Tibetan Buddhists are saying is that when we recognize the elements as allies, as benevolent aspects of our true nature, we are taken care of by them instead of tortured by them which as it turns out is a product of our own ignorance.

If we meditate during our lives and become familiar with the experience that all is divine, we begin to realize that all allies are expressions of the divine just as our awareness (including our physical presence) is an expression of the divine. “All being divine” logically allows us to know that there is no actual difference or separation between what we consider to be ourselves and all allies and everything else. This knowledge makes meeting the bardos after death so much easier. Even if presented wrathfully to us, how can they be the enemy if they are actually us?

Similarly, if we see that the elements are all divine in nature, then we see that they are not separate from us. When we see them as other, we are afraid of them and naturally from this perspective they appear to attack us and destroy us. If we no longer see them as other, but rather as part of ourselves, they will cease to be the enemy and we need never fear them. As a result, we will never be harmed by elements of nature. Now if we can just learn the same lesson about our brother and sister humans on the planet we will be in good shape.

You may make copies of this writing and distribute it in any media you wish so long as you do not charge for it or alter it in any way. You must credit the author and include this entire copyright notice. While the text may be shared, no audio files including lectures, music and/or sound meditations may be posted on any site for any reason without written permission from the Power Path.

Thank you!
ॐ Namasté - Blessings!
"Life is an echo, what you send out comes back."
© 2008-2022 crystalwind.ca. All rights reserved.
Spider Season
A Second Bill of Rights For America (And the World!)
The Only Viable Path Ahead: Release and Reinvent
Get This App Now!