No Shame, No Blame - Just Lame 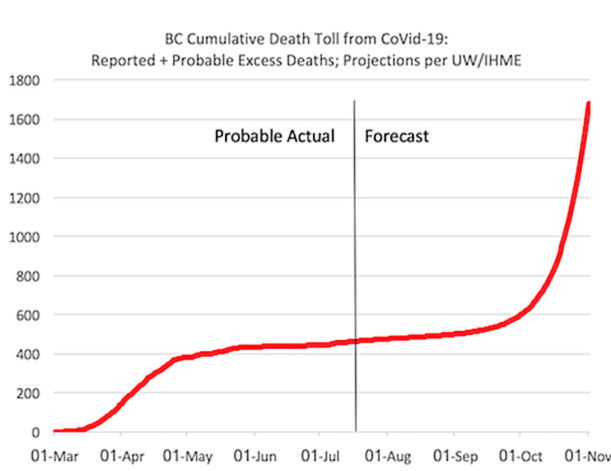 Forecast CoVid-19 death curve for British Columbia. Sources: Historical data: BC CDC; 270 additional excess deaths probably attributable to CoVid-19 in March & April per Statistics Canada; Forecast per UW/IHME as at July 14; they assume the next complete shutdown in BC to occur around October 15, as deaths begin to surge, but too late to prevent the curve above.

I went to do a bit of food shopping today, and it was an astonishing, and educational experience. I live in a very small (3,800 people) but spread-out community, and we in BC have been particularly blessed with an extremely low rate of CoVid-19 infections and deaths, due principally to good luck, but also due to our relative isolation, the extraordinary competence of our provincial epidemic health leadership under Bonnie Henry, and Canadians’ seeming natural propensity to follow the rules in times of crisis.

All food businesses in our community have clearly posted and physically marked-out CoVid-19 rules: Marks on the floor and outside walkways to delimit 6′ separation while waiting in line, capacity limits, separate entrance and exit doors, and, usually, antiseptic wash at the entrance.

There was no outside lineup in this particular business, so I walked in and took a spot in the inside demarcated line waiting to order. Between me and the person ahead of me in line was a small throng: three parents apparently from two families, two local police officers, the owner of the establishment, and, running around among them, five children. They were laughing and telling stories (it’s a small community, and most people know each other). They were, absolute maximum, three feet apart. Indoors. No masks. The kids were brushing by customers, running in and out of the doors.

I thought I’d been somehow horrifically transported to Florida. Surely this wouldn’t be happening here? The group’s conversation lasted at least five minutes before the business owner, still unmasked, returned to the kitchen. When the parents and officers continued to chat and block the way forward in the line, oblivious, I gave up and, walking carefully around them, gave up and exited.

I went to another food establishment a short distance away. An employee, masked and washing surfaces around the store entrance, told me I’d have to wait since the posted maximum number of people were already inside; I did so gratefully. When I did get in, everyone I saw in the store wore a mask and carefully avoided encroaching on 6′ space around other customers and employees. The counter was thoroughly sprayed and wiped down before I was permitted to place my items on it. At no time was I within 6′ of anyone in the store. I thanked them for their concern for public safety and for their diligence.

Many customers frequent both establishments, so how was I to account for the utterly different experience I had in them, mere minutes apart?

I’m not a fan of blaming and shaming — in my experience it usually backfires, and my community is small enough that the repercussions to all parties could easily blow out of control (I’ve seen this in other situations where residents of our community seem overly hasty to rush to judgement and take “sides”, without any concern for the facts).

And I’m sure my community is not unusual, even here in cautious BC. I just want to understand why the clearly communicated (every day!) simple advice of health experts is being ignored. Because the potential consequences are tragic. Spending time indoors with people not in your bubble/pod, without social distancing, and without masks, is, I am told, statistically as dangerous as driving drunk. We don’t tolerate drunk driving, so why do we tolerate this? It gives the lie to arguments that recent surges in cases are due to “frat boys having Coronavirus parties” — this has very quickly become endemic behaviour in the communities of just about everyone I know.

IHME at the University of Washington has recently revised its death predictions based on expected changes in social distancing and mask behaviours. The chart above shows what it now predicts for British Columbia. When I first saw the projected surge this fall I was incredulous — new cases and deaths are so low here that other jurisdictions are studying our success. But now I understand: With fewer than 1% of BC residents exposed to CoVid-19 to date (lower than just about anywhere else with a major metropolitan city), and the kind of reckless behaviour I witnessed today (and it’s not the first time I’ve seen it, though it is the first time I’ve seen business owners and police officers contributing to the problem), not only is a fall surge in deaths here possible, statistically it’s more or less certain. We, and other jurisdictions that have so far been mostly spared, are almost inevitably going to allow the levels of infection that are now hitting Florida, Texas, Arizona and Southern California, enough to bring per capita hospitalizations (already happening there) and potentially per capita deaths, up to the levels seen in New York, Québec and other hard-hit areas.

It’s discouraging, when we now know full well the consequences of our behaviour, that we seem to be knowingly sleepwalking into extending this pandemic for months and possibly years until/unless a safe, affordable, and effective vaccine can be introduced.

So what’s going on here? What is causing normally reasonable, intelligent people to act this way, when they certainly wouldn’t drive drunk, wouldn’t play Russian roulette with strangers, and wouldn’t, as one friend of mine put it “knowingly engage in a form of mindless collective mob violence with potentially catastrophic consequences for all around them”? It’s not as if their livelihoods depend on them putting themselves and others at risk.

The answer, in a word, is complacency. Or if you want two words, human nature. These are the main factors that, IMO, are at work creating this seemingly inevitable disaster:

It’s kind of sad to observe that we seem incapable of learning from others’ mistakes, at least unless we see them first hand. So we seem destined to repeat them. So that means another thousand or two British Columbians will needlessly die. And another 100,000 or more Americans. And another two million or more worldwide.

We may be getting a foretaste of humans’ incapacity to prepare for, or work to mitigate, crises of other kinds, most notably our imminent economic, climate and ecological collapse. Many have already drawn “hockey stick” curves showing these crises growing exponentially. We may believe that these crises do indeed loom large, but we’re not, by our nature, prepared to sacrifice much of anything we value to address them, at least until we know from direct experience and beyond all doubt that we have no other choice.

So no shame, no blame. Like rats in a maze we are just doing what creatures of our species do to deal with the needs of the moment. I can’t help but be outraged at what that leads to, and what it means for our future. But it is a pointless, futile outrage. We are wise, we homo sapiens, and capable of incredible invention, but we are also foolish, hopelessly incapable of dealing with what we have, in our blink of time on this planet, magnificently, astonishingly, and tragically wrought.

The Power Of Gratitude
The Principle of Mission
CoVid-19: Making Sense of the Numbers

We have 1747 guests and no members online