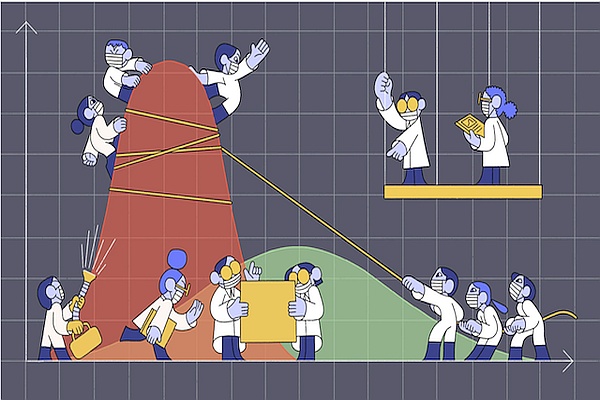 brilliant illustration by Nan Lee in the New Yorker

The global social distancing effort has been one of humanity’s greatest collective achievements. I don’t think any human endeavor has ever saved so many lives in such a short period of time. — Solomon Hsiang, in Nature magazine, July 2020

The reality, of course, is that social distancing cannot cure or defeat CoVid-19. It only allows us to hide from the virus while scientists do their work… There’s a good chance that the pandemic may not be over until 2024. — epidemiologist Howard Markel, in the New Yorker, August 6th, 2020

In the earliest days of CoVid-19, there was a debate among both health experts and laypeople about whether the best strategy for dealing with it was containment (testing, tracing, isolation, social distancing, masks) or “cull the herd” (let it spread until “herd immunity” has been achieved).

The main factors involved in making such a decision are (1) transmissibility (how easily the disease spreads) and (2) virulence (what proportion of those infected die, suffer permanent debility or must be hospitalized). CoVid-19, it turns out, has a relatively high transmissibility and a relatively low virulence. Epidemiologists have known for a long time that containment is hard when transmissibility is high — containment methods have to be intense and sustained until vaccines and effective treatments reduce its virulence to “acceptable” levels. The increasing mobility of humans and the increasing fragility of our globalized economy make it even harder.

So it wasn’t surprising to hear some people throwing up their hands and saying “cull the herd” — basically saying that citizens wouldn’t put up with sustained social and economic restrictions long enough to find an effective vaccine and highly-effective treatments, because the virulence (1% CFR — case fatality rate) wasn’t high enough to scare them into doing so.

This is a hard calculus: Consensus seems to be that about 1.5 million people worldwide (about 2.5x the official numbers, borne out by ‘excess deaths’ studies) have died so far from the disease, and that about 15,000 more people are dying each day (again, 2.5x the official numbers of 6,000/day, and currently trending slowly upwards). That’s a half million people every month. There was an expectation for a while that deaths were tapering off as the world got wise to the benefits of social distancing; two months ago it was one third lower than the current level and trending downward. There’s still a sense that the disease is just “working its way” around the world and that deaths will soon decline. Though an increasing number of epidemiologists and modellers are now doubting that will happen: 1.5 million deaths suggests that only about 2.5% of the world’s people have been infected to date (and are now hopefully immune, at least for a while), leaving 97.5% still susceptible. 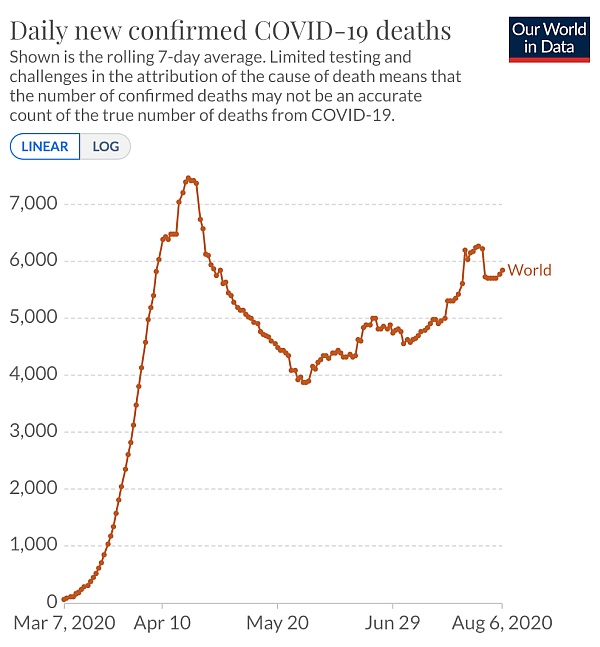 Compare that to the 0.5-1% of the entire global population — 40-80 million — that conceivably could have died if we’d just let the disease run its course until herd immunity finally kicked in. Not to mention the collapse of hospital and health care systems all over the world trying to treat up to a quarter billion people that would likely have been hospitalized under that strategy. “Cull the herd” was not even a practical option under those circumstances.

But even with only 2.5% of the world’s population immune or dead, isolation fatigue is already setting in, bolstered by economic fears and political opportunism, leading to insanely premature easing of disease containment measures. And while vaccine research is promising, getting the majority of the world’s people effectively vaccinated is at least six months and possibly as much as 24 months away. That’s between 3 million and 12 million additional deaths at current rates. By then the percentage of the population infected and (hopefully) immune could rise to anywhere from 7% to 18%.

But way back in April, Malcolm Gladwell made the point that we may never be able to sustain the kind of containment measures needed to prevent infection from getting out of control until “cull the herd” ends up the de facto strategy in all but the most disciplined and isolated parts of the world (ie China, Taiwan, South Korea and perhaps New Zealand). Small differences in containment efforts can make a huge difference in reducing deaths and infections: Canada’s current daily per capita death rate and infection rate are less than one tenth those of the US, even though per capita rates in many US states had been comparable to Canadian rates until they recklessly “re-opened”.

What is particularly disheartening is how quickly the roughly 0.2% of the world’s population (about 16M people) who are currently infectious can spread the disease, spiking “positivity” rates (% of those being tested having a positive test result) from 1% (the current Canadian and Western European average) to 10% (where it remains in some parts of the US). With positivity rates that high, any easing of containment efforts will quickly lead to new peaks in hospitalizations and death rates.

The one thing we seem to be able to say for sure is that the population everywhere is willing to mostly honour containment regulations when (1) hospitals get overwhelmed, (2) corpses overflow into containment areas outside them, and (3) everyone knows someone in their community who’s died, probably horribly, of the disease. Latin Americans, not renowned for their love of regulation, are among the world’s most diligent mask wearers and social distancers (they put North Americans to shame). That’s because they’ve witnessed first hand what happens when this disease gets out of control.

But these are often too-little-too-late reactions, and memories fade, while pressures to resume normal social and economic activities are relentless.

The health system has been emphasizing “sustainable” habits — physical distancing, avoiding crowds, washing hands and wearing masks — that people can adopt over the longer term — years if necessary.

There is no other way. Perseverance and patience, keep going, learn your routines.

Are we ready for this? I’m not so sure.

So I’m going to make a few predictions:

In short, I think our human nature is going to cause us to fail what Howard Markel calls the CoVid-19 endurance test. (The necessary steps to pass it, which Howard outlines in his article, are so ambitious as to be currently out of reach for most countries.)

We’re all doing our best, but this disease, like many infectious diseases before it, knows our Achilles’ Heel.