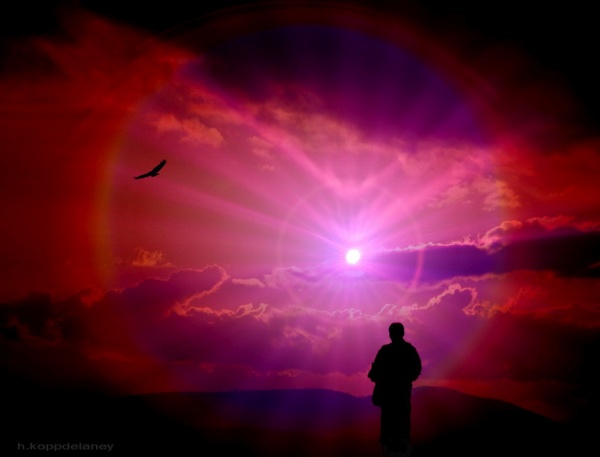 Recently I was in a rousing conversation about enlightenment with several people, one of whom had a pinched imagination while insisting we cannot find “full enlightenment” in our lifetime. Besides being untrue, I thought it presumptuous for anyone to put limits on what we can attain in our lives.

My original post on social media spoke of the qualities of “enlightenment” and how it might manifest in a few ways. That naturally led to a discussion of what “full enlightenment” is, and I offered a few examples of historical figures who seemed to fulfill their spiritual purpose on Earth AND were fully aware that they were doing it. Here was my post:

Food for thought. I was just asked what is enlightenment? I responded: Enlightenment is the state of "being enlightened." As everything in the universe is composed of light, and all shadows result from light hitting a dense object (yes, this applies to personality shadows as well), "enlightenment" can be: a) the inner light emanating to the world, b) the eternal light illuminating some facet of us which makes things clear with no shadow, c) a state of translucency so that the light shines right through us in action, feeling, and thought, d) a constant state of awareness of light, its principles, and how to utilize it in situations to dispel darkness, or e) any other state of being which dispels darkness, with or without conscious effort.

Of course this is not the totality of what constitutes “enlightenment” but I figured it was a good place to start, since to be “enlightened” is about Light. So I offered what I did in the spirit of what Light is, what we are able to attain with it, and how to view it so we can in fact be our true nature, “Beings of Light” shining that Light unto our world.

Here I suppose there is an interesting distinction between “enlightened” and “aware.” While ideally greater awareness reveals our Light, and our Light should naturally express a broad awareness of whatever is our thing to do/BE on Earth, we understand that there are circumstances where one can be aware but not in an enlightened way. I still can’t figure out how an enlightened Being could ever not be aware of what their spiritual training and purpose has led them to be aware of. So in a nod to the difference, one can be aware but not enlightened, but one cannot be enlightened without awareness.

Someone challenged me on my original statement, stating “with authority” that total enlightenment cannot be achieved because Earth is too dense and humans cannot know the finer energies. I reminded them that no one believes “the whole truth" could ever be found in even one book, much less a comment stream, and put forth that every single thing I stated is true in terms of every possible option regarding light.

I also stated "total enlightenment" can be known, and gave them this:

One can enter a nondimensional field of absolute Light while still fully aware. One can in fact be in training to be the consciousness of a planet or a sun while still in a body. We can achieve one form of "full consciousness" while alive in a body. There have been quite a few great ones who literally could put on or dissolve a body of light while on Earth. These were "mere humans" before they became the embodiment of perfect enlightenment.

The point of being an eternal in a body having a human experience is exactly for the purpose of attuning to the subtle forces, energies, and senses so that when we leave our body we aren't confused by the lack of gross senses. We learn countless forms of "perfect enlightenment" while still on the Path of Earth Service, and learn about the vectors to other forms of "perfect enlightenment" which we'll practice in the future.

We understand that the Tao which can be expressed is not the entire Tao. I doubt anyone here would imagine that a few sentences could express an infinitely expanding and form-shifting energy. However - I'll GUARANTEE you that if you succeed in even half of what I offered, you'll be more enlightened than 99% of humanity. So let's not speak of some sort of abstract "whole of enlightenment," since neither you nor I can possibly express that; let's speak of ways to recognize enlightenment in others, which my original post does.

We understand that the inexpressible cannot be expressed in a few sentences. However, all the original post stated was that if you succeed in a) your inner light emanating to the world, b) the eternal light illuminating some facet of you which makes things clear with no shadow, c) you attain a relative state of translucency so that the light shines right through you in action, feeling, and thought, d) become a constant state of awareness of light, its principles, and how to utilize it in situations to dispel darkness, or e) attain any other state of being which dispels darkness, with or without conscious effort, you will be more enlightened than just about every single Being you'll ever know. If you find you have attained all these states of consciousness 24/7, then you’re in some sort of “enlightened” state.

At that point someone else jumped in with “I found that in a state of enlightenment, the Light also illuminates the minds of those within close vicinity to where they too are afforded the ability to see more clearly into their life & their relationships with others, & they too can feel its effect!” I have seen this is in fact true for those who are receptive. However, others feel the heat, react, and sometimes attack the source of the Light because they know they cannot attain it and resent anyone else being at that level of awareness.

The original challenger came back with “total enlightenment cannot be known until we pass to the other side. What we call total enlightenment is not total (while) we are here in this human body. Unless one is Jesus or even better.” That of course opened the door to mention the countless predecessors in whose footsteps we follow.

There are practices which ultimately will lead to a state of "total enlightenment." I have one such work linked on my main page, written centuries ago and practiced by literally a million monks over that span, some of whom attained Samadhi here on Earth, dying with no pain in full enlightenment. It is entirely possible to attain the same state of awareness as St. Issa (as He was called), and many have done it both before and since.

Of course, we are not discussing "perfect Christ-hood," which we are told is an office occupied by many before St. Issa. Sri Krishna was one. Melchisidek was another. Even Apollonius of Tyana demonstrated all of the powers demonstrated by Jesus, as have more than a few Sat-gurus in the East. These are historical figures who demonstrated their own forms of "perfect enlightenment."

These historical Beings have demonstrated that it is possible to attain enlightenment in a human body (Krishna might be the exception here!). While the work is forever and learning becomes more strenuous with each expanded state of awareness, it is possible to be living our Light 24/7 in a conscious way, doing what we are here to do and shining the Light of our Loving Wise Intelligence in our field of service. We are only limited by our imagination.

So while there are many who may not feel like they’re able to attain enlightenment, any idea of a limitation on our potential awareness literally has no relevance to anyone else striving for an enlightened state. Here I’m reminded that “enlightenment” is more of a verb than a noun, as is “awareness.” Awareness is infinite and fluid, while enlightenment is us becoming aware of how to shine our Light into our world, and utilize that Light however we need to in order to illuminate self or others. “Enlightened Awareness” could be said to be the goal, the means, and the path to our most perfect self-expression, regardless of what field that expression takes place.

I will end this with a caution about buying into anyone else’s idea of what “enlightenment” should look like. We each have our unique Dharma to fulfill, and often we are aware of things beyond our ability to describe in so many words. But we can be fully aware, fully living our Light in a conscious way, and still be in a body, eating and sleeping and laughing and being who we are. So by all means, follow your Light, BE your Love, trust your Wisdom, and use your Intelligence to fulfill your purpose on Earth. You never know who might be “enlightened” by something you say or do. We are as enlightened as we allow our Light to shine. Have fun practicing being your Light in your world!

Reprinted on crystalwind.ca. with  written persmission from Robert Wilkinson.

back to top
Discernment Reminders
Frequency Gates – What The Heck Are They?
Do We Really Create Our Own Reality? The Myths and Dangers of New Age Belief

We have 2257 guests and no members online