A Massive Explosion Detected in Ophiuchus 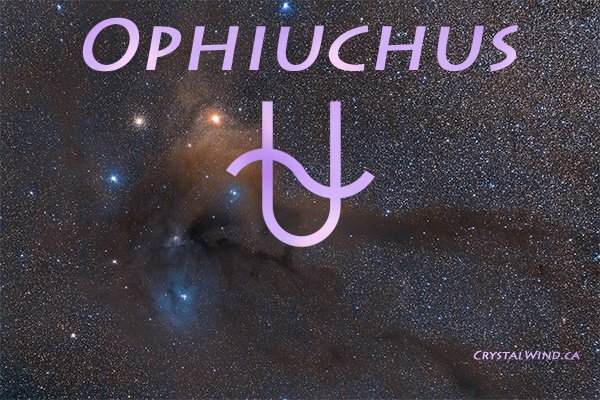 Ophiuchus has held a special fascination in the Heavens for many people as the thirteenth sign of the zodiac. Here we have an image of a healer with two serpents representing the male and female forces which are the mirror of the Creator’s divine blueprint of life.

In my own explorations of Ophiuchus, I have felt him as a holographic representation of Moses holding the serpents and witnessing the burning bush. You might recall from the bible that Moses had a stutter and had also killed a man – you might say an unlikely candidate to be a primary prophet of God. It is in this part of his journey that God shows him two miracles – his staff turning to serpents and also the burning bush which doesn’t burn, to convince Moses to follow His will. As a result of Moses trusting God he is eventually able to liberate the Hebrew people from Egypt. This story has many metaphoric resonances for our time and if you haven’t looked at it as an adult delve into its profound mysteries.

The Goddess Asteroid Hygeia in my journey also connects to Ophiuchus. Hygeia was the daughter of Asclepius and again the symbol of the two serpents is connected to both figures. Hygiea, as the feminine counterpart, represents ancient lineage of healing that connects to sleep, dreams and altered brain wave states such as sound healing.

The BBC released this story of the huge explosion on the 22nd February 2020 – I’m not sure of the exact date it was discovered but given the numerology this is certainly a key date in which its impact filtered into our Earthly consciousness. 22 is the number in the Gene Keys which relates to the Opening of the Seven Seals. It coincided with New Moon in Pisces conjunct Neptune in the days that followed.

Supernova’s have been known to release incredible new information to human beings. For example, Human Design is said to have come from the Supernova of 1987 – the year of Harmonic Convergence. Many wonderful political events followed such as the Berlin Wall coming down and the end of Apartheid. The system of the Gene Keys then emerged from Human Design and is a system I myself follow and am infinitely fascinated by as it is all about unlocking the potential for light within our DNA.

It is a struggle to find harmony at the moment but that is I feel the essence of the work. In the post-election depression in the UK many people on the more progressive end have completely withdrawn from the media and politics – perhaps not such a bad thing. It is a fight sometimes to reach for love for the ‘other’ voters and for authorities who seem hell bent on harming both vulnerable people and the environment. The new government has started their rule with deporting many people from the Caribbean who have lived here all their lives. There is a hostility towards other Europeans, for example one commentator said how we can all go back to enjoying shopping again once other European’s have left. That is certainly not how I feel, I celebrate living in a diverse humanity. Britain like America is a split society at this time and the parallels are striking,

The BBC and media are also under attack and much like Apartheid South Africa, there are moves to control exactly what the media can and cannot say. Despite this though, the Prophetic side of me hears God whispering hope, knows that Christ is right here – is us all – for those who have ears to hear.

I recently discovered a wonderful audio book of an interview with Brother Gregg who runs an awesome project called Home Boys in Los Angeles, and the Buddhist teacher Pema Chodrin, who I often feel saved my life in the years I was an adoptive mother. The audio book is called Creating a Culture of Tenderness and by the end of listening to it I was right in that place of harmony. The job is to stay there!

Back to the explosion in Ophiuchus that was so enormous at first astronomers dismissed that it could be an explosion at all. It is 5 times bigger than anything previously seen and is more akin to the Big Bang happening again. Using low frequency radio wave telescopes astronomers have figured it out.

What does this mean for humanity? God works in mysterious ways, but I feel sure that perhaps many of us are receiving this download right now. We can certainly tune into it and see what emerges from that ‘void’ space. What has been birthed?

Ra Uru Hu was not your traditional mystic:
“I was conditioned to believe that science fiction was a genre of literature, that mystical revelation was simply a more antiquated form of the same, and that God, if not dead, was most likely a concept. On the evening of January 3, 1987, all that changed.”
Previously a sceptic who didn’t believe in the mystical or even follow astrology, living as a hermit on the island of Ibiza, Ra’s experience changed him dramatically. He spent the next 23 years becoming the world-renowned messenger of the penetratingly accurate, immensely detailed Human Design System, which describes the mechanics of our being.

According to the source of the Human Design System, “The Voice” originated from a supernova – the death of a star. Scientists named it 1987A. This supernova’s last breath bombarded our planet with subatomic particles that transmitted the entire system into Ra Uru Hu, and seeded all of us with its information. One of the first things it told Ra was that the big bang was our universes conception point, and it has yet to be born. (My words – could this be the birth?)

Here is a link to the original BBC report https://www.bbc.co.uk/news/science-environment-51669384.

Here is a link to the Gene Keys web site https://genekeys.com.