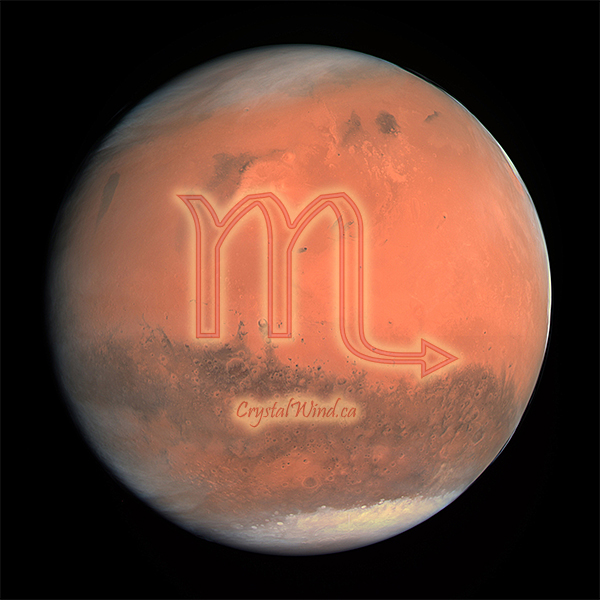 The raw power of Mars will be unleashed on November 19, when the planet of action and assertion will break into the sign of Scorpio. With the complicity of Mercury stationing direct (which happens the next day), Mars in Scorpio will bring back the momentum, the propulsion and the impetus that have been diluted and tamped down during the red planet’s transit of Libra.

Mars has been in Libra since October 4; Libra is the sign of Mars’ detriment, ruled by pleasure-loving Venus and supervised by Saturn, the cosmic disciplinarian – not the most sympathetic environment for a planet that is all about motion and force.  Mars in Libra has been all about weighing our options, sharing our load with others and tackling relationship issues; a much needed break perhaps, but not the best energy to move forward. Delays, procrastination, struggling with deciding a course of action have been recurring themes during the past few weeks, and the feeling of stagnation was magnified by Mercury stationing retrograde on Samhain.

If the concept of “culture shock” applied to planets, then Mars finding himself in the realm of Libra would be the perfect example. It’s true, we need to slow down from time to time; especially in an age of hectic, artificially manufactured rhythms and routines that push us to be relentlessly productive, causing many of us to fall prey to the chronic burnout epidemic (I like this article by Canadian anarchist astro-reporter Willow about the coercive demands of the digital age). We shouldn’t underestimate the purpose of inactivity, of stillness, of getting off the ride.

Mars in Scorpio: Life and Death

However, after nearly two months of sitting on the fence, meeting people halfway and waiting on them to act, we probably had enough. We want action. We want progression. We want evolution. We want to get rid of the dynamics that weigh us down, to sever the connections that have run their course, to let something die so that we can re-invest our personal energies.

The urge to terminate, to purge, to transform, is very strong. Survival instinct is a major share of Mars in Scorpio’s fuel source. Mars in Scorpio is primal, carnal, instinctual; think of the trees choking off their own leaves during autumn to make sure they survive the winter. Think of how the same leaves decompose into the soil, turning into nutrients. This cycle of killing, shedding and renewing is at the core of Mars in Scorpio’s understanding of life; major strides can be made if we embrace this balance between life and death, loss and gain.

Make no mistake: primal does not mean reckless. Mars is empowered through Scorpio, but is a different beast than Mars in Aries (no pun intended). It will take focus. Strategy. Intuition. Awareness of our limits, of our true, hidden motives. We will need to budget our energy and know when to stop, lest we burn ourselves to the ground, and if we intend to accelerate a situation all the way to its end, we need to make sure it’s a beneficial decision and not something that we are doing out of spite, vengeance or in the heat of the moment.

With Mars in Scorpio, we want to make power moves. We want to alchemize, to turn the dirt into nourishment, to be in control rather than to let our impulses and self-destructive urges (or, even worse, other people’s) control us. Not only is it possible — it needs to be done. Once we make the most of Mercury’s direct station to assess the situation and manoeuvre accordingly, remaining mindful of the delicate line that separates mindless destruction from radical regeneration, it’s full speed ahead.

If you want to discover how the astrology of November 2019 will affect you specifically, you can request a personalized astrological consultation or request a Tarot reading.