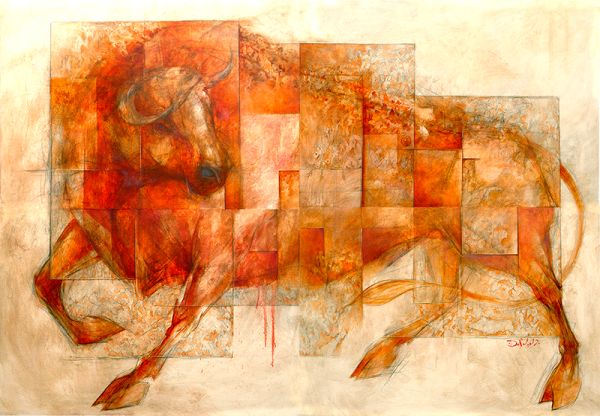 I’m planting a tree to teach me to gather strength from my deepest roots. ~ Andrea Koehle Jones

Our better angels can help to guide us through the first few days of this week which could be filled with a bit of contentious land mines. Mars is at the very end of Aries, filled with ire, impatience, and an abundance of resentment as it squares off with Pluto.

It could feel like so much is working against us, as we struggle against what feel like increasingly oppressive circumstances, and forces much larger than ourselves. Mars in Aries almost never gives up. But after dealing with the forces of Pluto, many, even Aries, will be exhausted and burnt out.

All the more reason to pack up the tools and weapons, and retreat from the field of battle. We’re ready to retreat to more peaceful and serene environs. We do this not to escape, avoid or forget, but in order to recoup our strength, and fortify our resources. And so Mars moves from the fiery sign of Aries this week, and enters the verdant fields of Taurus.

We have met the Gorgon, and now we need to recover. We deserve a much needed rest and respite. Taurus is a safe place to go to recharge our batteries, and put up our feet. It is where we go to gather strength from our deepest and most reliable roots. Or so we think.

The problem is, is that Mars is not alone in the sign of Taurus, which currently has a very unruly guest ploughing through the Elysian fields and blaring all sorts of cacophonous noise and mayhem hither and yon. Mars in Taurus is a much more laid back sort of Mars, usually avoiding confrontation and battle. But even in the pastoral fields of Taurus, Mars is still Mars, and Uranus, the unruly guest that has taken up residence there, is still Uranus. And then there is also Saturn.

Due to the magical illusion of the retrograde motion of the planets, Saturn is appearing to move back within the zodiac, closing in for a revival of its 2021 performance with Uranus. And as they get closer and closer to yet again forming an almost perfect square in September-October you will feel the tension rise. This is that feeling of US against THEM; of the OLD vs. the NEW; of CONSERVATIVE factions coming up against ALTERNATIVE or PROGRESSIVE ideas; where OPPRESSIVE LAWS threaten the civil rights and FREEDOMS of individuals.

And this is the reason why it is important to note that Mars is entering Taurus. This is because Mars is like the match that lights the fuse. The flame that ignites the explosion. Even in the places where we assume things to be safe, predictable and secure. Even in Taurus. And although Mars will not reach the degrees of Saturn and Uranus until the end of July, by Mars entering Taurus it is bringing the flame closer to the explosives. Watch these dates: Mars is conjunct Uranus August 1st; Mars is square Saturn August 7th; and a Full Moon in Aquarius on August 11th brings it all to a head.

Meanwhile, once we get past that miserable Mars/Pluto square on the1st of July, Mars enters Taurus in the wee hours between July 4th and the 5th, quickly followed by Mercury entering Cancer. This is about circling the wagons. Going into retreat. Protecting our own, while catching up with the latest news.

We are drawn to family and tribe when Mercury is in Cancer, and will want to be in familiar territory, or with people we are comfortable with. We are seeking safety and security. Mercury/Mars weather is busy weather. But we are inclined to be busy with those with whom we share a common bond. Mercury will be in Cancer for the next few weeks until the 19th. Use it to reconnect with those you love and care about. Make plans to circle your wagons in a fun and playful way in order to conserve and restore some of that energy. You’re going to need it later on.

We have 744 guests and no members online