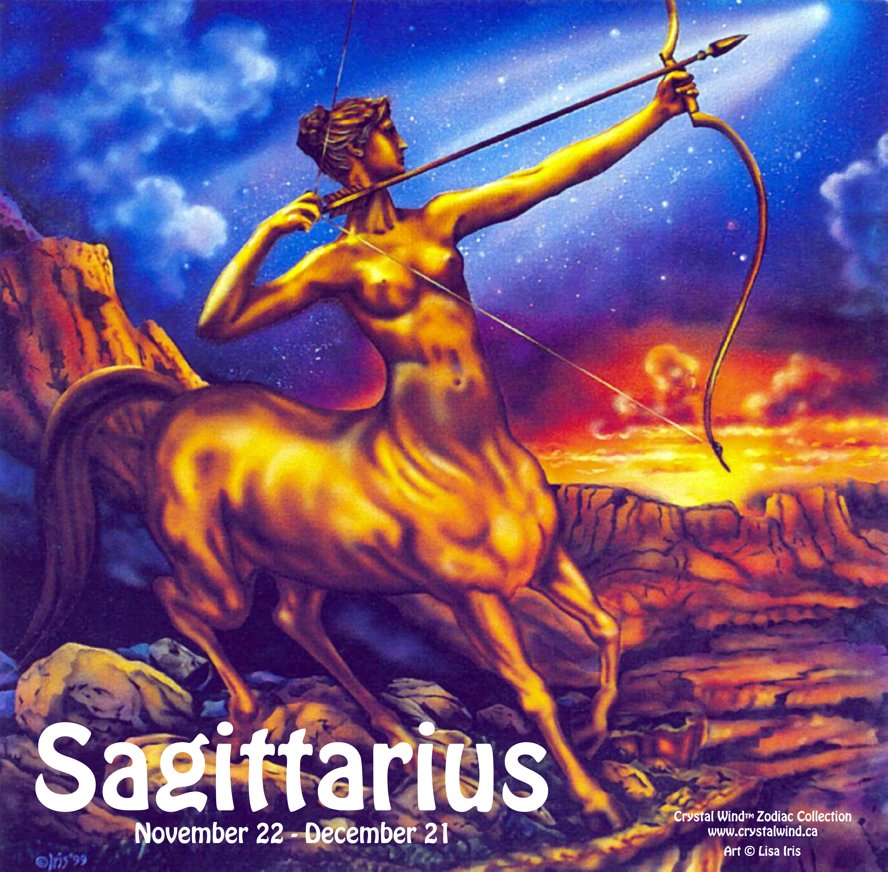 What we glimpse in Sagittarius gets organized in forms of personal power in Capricorn, so we're all facing a future that's already upon us. This year, Jupiter (ruler of Sagittarius) has made its transition from Sagittarius, its home sign, to Capricorn, putting it under the influence of Saturn. This year the December Sag influence is weak except for December 9 through 21, when only the Sun and Mercury are in Sagittarius.

Sagittarius energies became part of the long term atmosphere between November 2018 and early December 2019 because of Jupiter being in Sagittarius the entire year. Of some importance was the Sun conjunct Jupiter at 4 Sagittarius, since every conjunction to that point since then and for the next 11 years will activate that “promise of the Light.”

December's Sag energies actually were jumpstarted by Venus’ transit of Sagittarius in November, immediately “tag teamed” by the Sun at the end of November. Mercury is in Sag from Dec 9-29, and Mars activates Sag during its transit of that sign from early January through mid-February. That means we have Sagittarius active for about 106 days, almost a third of the year, during this Sag season!

Sagittarius is fiery, mutable, changeable, adaptable, and refuses to be boxed in by ordinary thinking. The Sun in Sagittarius shines the light of wisdom on how we must be open to our freedom to explore universal perspectives, and can lead us to a greater spiritual and philosophical aspiration that demonstrates the higher benevolent law of our cosmos.

Sagittarius is the freedom loving humorist adventurer, a wandering Magician-Engineer who shows that life is an unending series of "experiments in truth." Everything becomes grist for the mill of Soul, and all things seen as opportunities to break free of obsolete limitations and narrow views. Sagittarius takes an infinite amount of limited interpretations and weaves everything together into a larger understanding, morality, philosophy, and truth.

Never knowing what they're going to give us next, flamboyant Sagittarian superstars "Little Richard" Penniman, Keith Richards, Bette Midler, Tina Turner,"Toots" Hibbert, and Jim Morrison have all shown us outrageous genius, as did the Godfather of Rock and Roll, Alan Freed.

In the world of theater we find Lynn Fontanne, Mary Martin, Cyril Ritchard, and playwrights David Mamet, Noel Coward, and Eugene Ionesco, while a special nod goes out to Sagittarian Walt Disney, who opened the world's inner child through animation, multimedia, and theme parks, and Steven Spielberg, who gave us "ET," "Close Encounters," and many other timeless movies.

The world of literature gives us major Sagittarian talents such as the author of the most famous predictions in history, Nostradamus. Other legends include William Blake, poet and painter who challenged society's concept of God, Jonathan Swift,author of satires Gulliver's Travels and A Modest Proposal, C.S. Lewis, author of The Chronicles of Narnia, A Grief Observed, and many other masterworks, and Madeline L'Engle, author of A Wrinkle in Time.

Also happy birthday to the states of Alabama, Delaware, Illinois, Indiana, Mississippi, New Jersey, and Pennsylvania, and the nations of Australia, Belgium, Chile, Hungary, Madagascar, Peru, Spain, and Tibet. We’ll finish this tribute to one of history’s great Sagittarian documents, The Universal Declaration on Human Rights.

We have 2190 guests and no members online