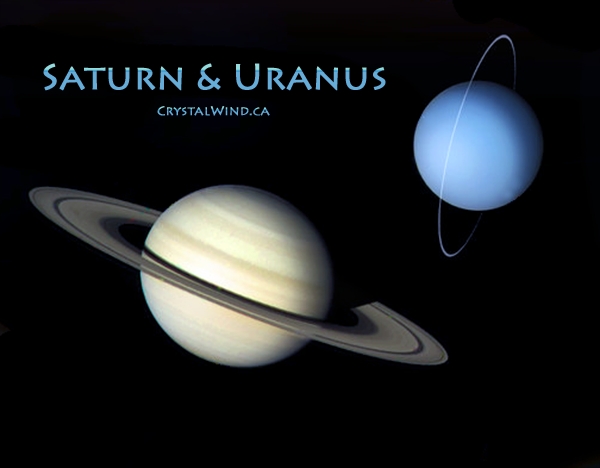 Saturn squares Uranus three times this year. Because a square is most powerful within a degree and a half both forming and separating, that three degree window in this slow moving square indicates many weeks of tension three times in 2021. We’re in the heart of the second one, with the Mercury retrograde giving us a look back and signs and signals of what’s to come!

I want to thank Sandra Walker for her insights about these squares. She pointed out a few things which intrigued me, like Mercury retrograde in the first two but direct in the third, with the rx suggesting more introspection. And that the first square rules the period until the second square, and the second square rules the next period until the third square.

The first square occurred in February from 8 Aquarius to 8 Taurus with both direct in motion; the second occurs now with Saturn retrograde at 14 Aquarius square Uranus direct at 14 Taurus; and the third happens just after the December Solstice with Saturn direct at 12 Aquarius and Uranus retrograde at 12 Taurus. Remember these waning (upper) squares between Saturn in Aquarius and Uranus in Taurus mark the culmination of the cycle of these power planets which was set into motion when Saturn conjuncted Uranus in 1988. Interestingly, in 1999-2000 Saturn in Taurus made its waxing (lower) square to Uranus in Aquarius, so it would seem that this year activates conflicts dating back 20 years.

An important factor in how these squares will manifest can be seen in Venus. While Saturn is in its home sign at each square, Uranus is ruled by Venus, which is in a different sign during each square. At the February square, Venus was in Aquarius in the weeks before the square and for a week after, when it entered Pisces. So its influence in the first Uranus square was primarily Aquarian.

The heart of the exact second square began at Saturn’s retrograde station in late May, is exact June 14, and lasts until July 3. Venus began this second square “hot zone” in late Gemini, is in Cancer for the exact square, and moves into early Leo just before the square passes in early July. So its influence in the second Uranus square is primarily Cancerian.

The third square happens December 23/24, with the heart of that square beginning December 12 and lasting until January 7. Venus begins that period in late Capricorn conjunct Pluto, then goes stationary retrograde at 27 Capricorn, and is retrograde in that sign during the exact square. It remains retrograde in Capricorn through the entire period of the “hot zone” of the square. So we get two Mercury retrogrades and a Venus retrograde as influences in these squares!

The first square occurred on February 17 from 8 Aquarius to 8 Taurus with both planets in direct motion. Because of the “orb of intensity,” it means we were in the heart of the first square all of February and the first 10 days of March. Mercury was speeding up, about to go stationary direct, showing forward momentum, if slow.

The weeks of the heart of that square were kicked off by Venus’ conjunction with Saturn and square to Uranus between February 2 and 10. Mercury was crashing into retrograde before the Inferior Conjunction, showing lots of roundabout and indirect energies swirling around that conjunction. At the exact conjunction, Mercury was conjuncting Saturn from 12 Aquarius, its stationary direct degree, implying that our “fusion of life and mind” impacting the following weeks featured taking a new look at Saturn from different angles of understanding, with a “backward looking Saturn” dominating that period.

Also of note at that first square was Venus on the exact degree of the previous Inferior Conjunction between Mercury and the Sun, and the Sun at 30 Aquarius in the Transfiguration Zone! So that first square ruled the period between February and Saturn’s station in May which began the heart of the second square, which is where we are now.

The weeks of this square kicked off with Mercury making the first of its three squares with Neptune and Mars triseptile Saturn. At the exact square, the Sun is on the exact degree where Mercury went stationary retrograde, Venus is exactly sextile Uranus, and Mars is exactly binovile Uranus. This should be very beneficial for Uranus, since its ruler Venus is in a very productive aspect with Uranus, and Mars adds a dose of patience and higher realizations.

The third square occurs December 23/24, with the heart of that square beginning December 12 and lasting until January 7. Again, while Mercury is direct in motion, the major player in that one is Venus retrograde in Capricorn, ruling Uranus and itself ruled by Saturn. So while Saturn in Aquarius was the major influence in the first square, and Uranus in Taurus is the major influence in the second square, Saturn will again rule the stage during the time of the third square.

As Uranus will again be in its final biseptile with Pluto, expect that time to be highly irrational with major forks in the road of destiny encountered and choices made. Add Venus conjunct Pluto also making a biseptile to Uranus, Mars sextile Saturn, and Jupiter at 30 Aquarius in the Transfiguration Zone, and it’s easy to see how that one launches us “back to the future” and “into the Cosmos!

So the first square had the Sun at 30 Aquarius, and the final square will have Jupiter at 30 Aquarius. That implies the illumination we found between February and late May will somehow be related to the truths and opportunities which will open after the third square.

Remember too that the transits in Aquarius and Taurus have activated the square, either directly or indirectly, and the coming transits in Leo and Scorpio will create evolutionary T-squares which will help us integrate many things while moving some old stuck material down the timestream. The Leo transits will require good Scorpio responses; the Scorpio transits will require good Leo responses.

The tensions of the square may be released through either of the planets making the square. The trick is to take the positive building energies of aspects to either of these planets to release the positive energies through the planet in square. So demonstrate favorable Uranian energy through Saturn, and favorable Saturn energy through Uranus. The friction of Saturn square Uranus is helping us to understand our ability to make conscious choices about what to do and what can be ignored.

This square allows us to see the permanent patterns behind all things even as there is tremendous catabolic activity breaking down old structures, rules, and limitations. We all are seeing what’s important and learning to ignore the unimportant while expressing our part to play in the larger spiritual group(s) we’re involved in, demonstrating good Leo and/or Scorpio energies as circumstances require. Trust the process which brought you to this point of revelation and relative peace and enjoyment, since it opens many doors to new vistas.

Because the void created by a square is both the problem and the solution, show heart, strength, nobility, courage, concentration, and the willingness to release to attract. Understanding which Leo and/or Scorpio qualities are needed in conflicts or resistant circumstances will yield the best results. Learning appropriate Saturn responses, as we explore in Saturn: Spiritual Master, Spiritual Friend, can help us all navigate these powerful transformational energies. Saturn structures Uranus’ individualizing energies, while Uranus keeps Saturn’s structures fresh, innovative, and unique to circumstances. I explain a lot more about how Saturn and Uranus do their “dance of individualization” in our charts in the book, so if you don’t already have a copy, please consider getting one!

Though the generic energies are erratic and intense, be patient as you work with the material to concretize the emergent Aquarian energies. Uranus is revolutionizing our approach to substance, and Saturn is showing us a new social order. The two together will bring forth the best of the structures of the new era dawning at this time.

We have 802 guests and no members online