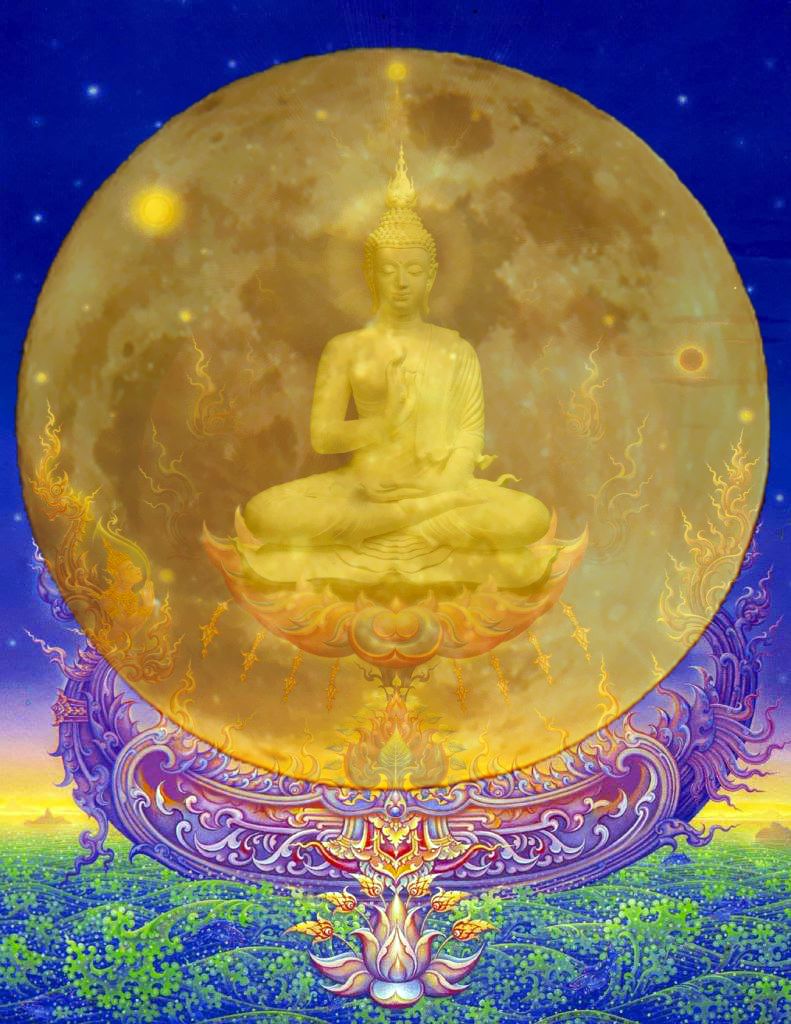 a.k.a. The Wesak Festival!

We have a very important Full Moon coming soon! The Full Moon of Sun in Taurus and Moon in Scorpio is a very special lunation, since for millennia it has been celebrated as marking the birth and enlightenment of the Buddha, said to be the first human to attain full higher awareness and then teach the truths that show all sentient Beings how to transcend suffering.

So this year, we’ll kick off the Buddha’s birthday now, which can help you prepare for the great global celebration called “the Wesak Festival,” or in some places, “the Vesak Festival.” To me, any birthday celebration should be a span of time, and certainly in celebrating the Buddha’s birthday we can take more than a day to be At-One with this very special energy. At the end I’ve included some links that may help elaborate on what’s happening, and what’s going on around the world.

Here I’ll note that every time the Wesak falls in the first 23 degrees of Taurus/Scorpio, there is a dispute between Eastern astrologers and Western astrologers when this Full Moon occurs. That’s why in past years some sites stated it occurred in late May or early June rather than late April or early May. In those years I celebrate both, since the Western Wesak is followed by the Christ Fest, the “Third High Moon,” itself a global spiritual event. I tried to explain why I take the view I do in the recent article on the Three High Moons of Spring.

A Full Moon represents a potentially enlightened state, where the Moon, which symbolizes form, perfectly reflects the greater light of the Sun. It marks a time when the seeds of the previous New Moon begin to manifest. This particular Full Moon is one where there is a great teaching sent forth, helping the world to become wiser in some way throughout the rest of the year.

The Wesak is said to be the 2nd of the "Three High Moons" of Spring, anchoring the outpouring of life into forms of awareness that can help us transcend suffering as well. This year the very dynamic regenerative and renewing Wesak Full Moon falls at 8:32 pm PDT April 26, 4:32 am BST April 27.

This one falls at the 8th degree of Scorpio and Taurus, marking a point where the light of an ability to “use knowledge and skill to meet the demands of a stage yet to come” finds focus in our calm mind seeing the clear reflected light which illuminates it. We will use the Light of valuing something on the emotional-social level of life to express this in deep and intense connections.

I'll go into more detail about the astrological factors of this Wesak Full Moon beginning in a few days. Hopefully this article will whet your appetites about the Spiritual nature of this Full Moon, while offering explanation about why this is a very special Lunation each year, along with the Aries-Libra Full Moon just past and the coming Gemini-Sagittarius Full Moon, a.k.a. "the Christ Fest."

I've offered explanations of what the Wesak Festival actually is in previous posts. To that end, rather than re-invent the wheel, here's what this global celebration is all about. From the past for the present-future:

Each year the Wesak Festival is celebrated at the Full Moon of Taurus-Scorpio in May. This global festival celebrates the birth, enlightenment, and teachings of Gautama Siddhartha, the Buddha, said to be the most enlightened human ever to walk this planet.

He taught the doctrine of compassion and the ways to end suffering around 500 BC, and his teachings have spread through the entire world since then. This is the largest spiritual celebration in the world, and has nothing to do with religion, since the Buddha was focused on how to live, not what to believe.

Supposedly when He left the Earth plane, his blessing for all time was a thought-form of “Buddha Nature,” which would renew the loving-compassion on the Earth whenever it was sent forth. It is said that the Wesak Festival is when Shakyamuni, ("Sage of the Shakya clan"), through his eternal Buddha Nature, “opens the treasure chest” and sends out a new global energy form of compassion to end suffering every year. So this is the time when these energies are renewed for another year.

As a friend of the site offered previously, it is said that every Wesak the Buddha actually briefly descends from the Heavens to return to the secret valley in the Himalayas known as Shamballa. There, surrounded by Adepts, Disciples and others, he pours out an annual blessing for all sentient beings on this planet.

He taught the 4 Noble Truths about life on Earth, and the 8 Fold Path as a way to live to end suffering for ourselves and others. While this is not the forum for an exhaustive discussion of the 4 Noble Truths and the 8-fold Path, if you haven't already seen it, (and even if you have!), please watch the extraordinary movie "Little Buddha" to know more about the life of this most amazing man for the ages. His life and teachings were dedicated to shine a light on the Way beyond suffering.

Though there are many ways his teachings have been stated and interpreted, anyone who actually practices the techniques will in fact find they are lessening suffering in their lives, and finding peace in a higher way of doing their Being. To quote HH Dalai Lama, “There is one thing we can all agree on. More suffering is bad. Less suffering is good.” This is the time of the renewal of energies that can lead all of us to less suffering in our life, and maybe be of service in lessening the suffering of others we know.

The Wesak Full Moon is the 2nd of the "Three High Moons." The so-called "Three High Moons" of Spring relate to the teachings of the Tibetan Master D.K. as written by the venerable Alice A. Bailey. Briefly, they are the three Full Moons of Spring each year when the life force reawakens, is poured out, and refined into a higher vision and understanding by the World Teacher.

The Full Moon of Aries-Libra is the awakening of Nature Herself, with life blooming everywhere there is a living process occurring. The Full Moon of Taurus-Scorpio is the Wesak, the anchoring of the awakened life force in a form of compassion that will lessen suffering for all Earth's creatures for the next year. The Full Moon of Gemini-Sagittarius is said to be the "Christfest" where the World Teacher takes the new outpouring and through multiplication and distribution, spreads the teaching in infinitely varied ways according to local conditions.

So over the next week meditate, open, feel the global compassion becoming stronger and more evident, and purify your life and consciousness however you need to in order to open to the timeless truths offered long ago by the one who set the pattern for the Ages. A Happy Buddha Birthday to you all, and may you all find a form of Buddha nature which increases your wisdom and compassion throughout the next year!

You can find out more about the Wesak legend and festivities at the Souled Out site here.

Buddhanet – The Significance of Vesak

How to make Vesak Lanterns in 6 easy steps

How the Baha’is and others celebrate the Vesak Festival

Here are a few places where they’re celebrating Wesak. If you’re not in these places, I’m sure there are plenty of resources on the web to help you find the nearest celebration, as well as the online celebrations also happening.

This celebration is happening all over the world, so enjoy this Happy Buddha Birthday however you can wherever you are. It's all good. Aum Mani Padme Hum!!

We have 1216 guests and no members online