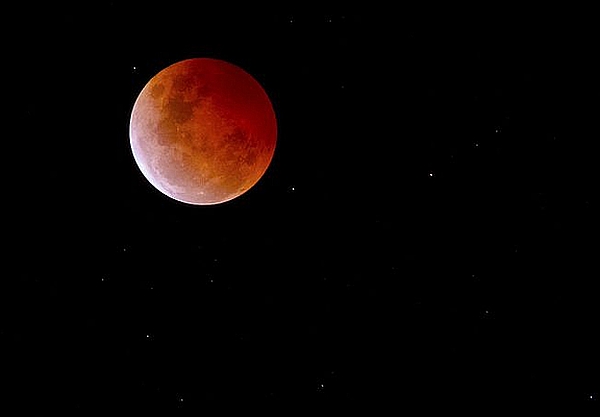 The Full Moon on Monday January 21, 2019 in the first degree of Leo is a total lunar eclipse. The lunar eclipse January 2019 astrology is most affected by Uranus. A challenging square aspect to this planet of uncertainty and rebellion brings change but also opportunity. Unexpected events and news are likely to cause anxiety and uncertainty about the future. Life may seem more hectic and fast paced than before.

Lunar eclipse January 2019 falls in an area of the sky with only dim stars. However, brighter stars align with the Sun to give the confidence and courage to accept change. Patience, self-control, adaptability and an open mind will help you and take advantage of the new opportunities that arise from the changing conditions ahead.

Like a regular full moon only stronger, a lunar eclipse focuses attention on your emotions, intimate relationships, and your home and family. A total lunar eclipse has an even strong influence on your private life. Sun opposite Moon qualities of emotions and instincts reach their peak at a lunar eclipse. This lets you take an objective and balanced look at your close relationships. Because you will be in touch with your own needs and intentions, you will clearly see any relationship imbalances causing disharmony.

With a total lunar eclipse in particular, the blotting out of the Moon represents a resetting of your emotions, clearing away the emotional baggage of the previous six months. The January 31 lunar eclipse complements themes found in the January 5 solar eclipse to form an eclipse phase which lasts to the total solar eclipse on July 2, 2019.

The total lunar eclipse on 21 January 2019 at 00°51′ Leo is conjunct some small fixed stars that are not used in astrology. Moon square Uranus is the major influence which makes this a challenging lunar eclipse. Looking at the chart below you will see that Mercury is nearly six degrees from the Sun. This is too wide an orb to have much of an influence on this lunar eclipse but Mercury square Uranus will, at just over three and a half degrees orb.

Moon square Uranus causes rapid mood swings and impulsive reactions. You may feel jumpy and have little patience for anything requiring commitment or focus. If anyone tries to tie you down or forced you to do something you are likely to rebel. Your normal routines may become boring and you could be easily distracted by anything new and shiny. You may have trouble relaxing because of an unsettling feeling or anticipation of something new just around the corner.

This is not a good eclipse for making sudden changes, especially in close relationships. New encounters may meet your need for a thrill but would cause a great deal of upset to your life and have a negative effect on loved ones. You may experience emotional outbursts from friends or family that would need extra patience and sensitivity. 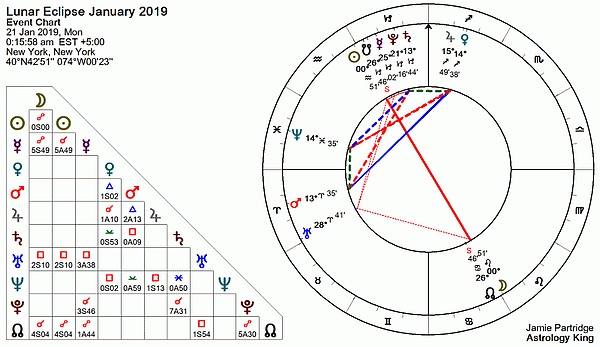 Mercury square Uranus can cause nervous tension because of the unsettling feeling mentioned above. You may receive shocking news or experience something unexpected that forces you to change plans. The normal tempo of life increases and you may have an unsettling feeling of always having to catch up. This is not a good eclipse for making plans or attending to detailed paperwork due to lack of concentration. Mishaps are likely in your communications whether in person, in writing or on the internet where misunderstandings could lead to arguments.

On the positive side, you have an increased ability to view things through a different perspective, which can lead to original ideas and breakthroughs. Chance encounters with others are possible, but most new friendships will probably be short-lived. Think twice before making bold statements, and double-check and travel plans. Avoid making spontaneous decisions or agreeing to things on the spur of the moment. So remaining flexible and open-minded is key to dealing with any unexpected events, from your car breaking down to printer jams.

Pi Puppis at 00°35′ Leo Sign is a star in the Poop Deck of the Ship Argo Navis. The star has the traditional name Ahadi, which is derived from Arabic for “having much promise”. [1] Argo Constellation gives a strong mind and spirit, prosperity in trade and voyages but is also associated with drowning. [2] It is correlative of events concerning the sea and shipping and of rivers and springs. [3]

The strongest stellar influence comes from the major fixed star Altair at 02°02′ Aquarius Sign. This bright pale yellow star in the neck of the Eagle gives a bold, confident, valiant, unyielding, ambitious and liberal nature, great and sudden but ephemeral wealth and a position of command. Altair conjunct Sun gives public honor, notoriety, favors from superiors, many friends and some envious ones who cause trouble through writings, some ill-health and losses, and danger of bites from venomous animals. [2]

Lunar Eclipse January 2019 is opposite Mercury and square Uranus. This signals unexpected events and news that are likely to cause anxiety and uncertainty about the future. So keeping an open mind and staying calm and patient is key to dealing with this erratic and unpredictable energy. Otherwise, impulsive reactions, rapid mood swing and miscommunication could cause panic and chaos.

Although the fixed star conjunct the Sun does not moderate this erratic energy, it does offer help by giving confidence and courage. Self-control and patience will counter a tendency to overreact and argue when faced with stressful situations. So take small steps and be adaptable.

If Lunar Eclipse January 2019 directly impacts your horoscope decan you can read about its effect in your monthly horoscope. For more detail about how it affects your natal chart see Full Moon Transits.

We have 1360 guests and no members online