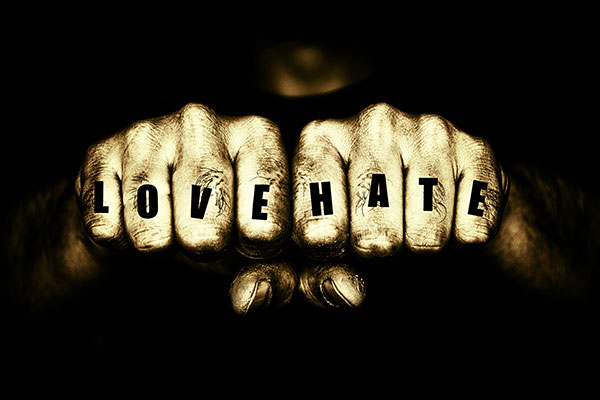 The Full Moon on Friday, June 5, 2020, at 15 degrees Sagittarius, is a lunar eclipse. The lunar eclipse June 2020 astrology is impulsive and angry because the Moon is square Mars. The Moon is also opposite Venus retrograde which not a good omen for love relationships. Strong relationships will withstand the test through patience and unconditional love.

However, lunar eclipse June 2020 poses a real threat to strained relationships. Impatience, sexual frustration, and lack of self-control could turn love to hate, resulting in impulsive actions and hostility. The June 5 lunar eclipse also brings the danger of war between enemies, as well as earthquakes.

Like a regular full moon only stronger, the Sun opposite Moon of a lunar eclipse brings your home, family, and intimate relationships into sharper focus. Opposing forces such as work versus home, or what you need versus what you want, create inner tension and external pressures. This can lead to conflict and crises that drain your energy.

The chart below shows the June 5 lunar eclipse at 15°34′ Sagittarius in an extremely tight square aspect to Mars. This creates heated emotions that can quickly turn to anger. The opposition to Venus retrograde focuses this anger on love relationships.

The fixed stars around 15° Sagittarius further intensify relationship tensions. They make it harder to show love and affection while making it easier for minor irritations to turn into all-out conflict. 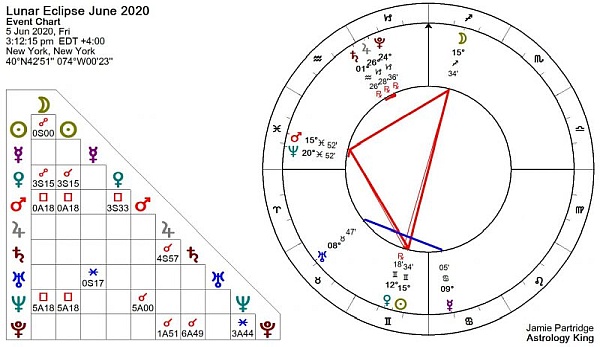 Lunar eclipse square Mars with the tiny orb of 0°18′ is easily the strongest influence on the lunar eclipse June 2020 astrology. It brings simmering anger to the surface so care is required to avoid being hurt or causing harm. You could lose your temper with a loved one or face emotional attacks from others. There is a danger when taking risks or acting impulsively. But holding onto anger and frustration is not advised, so some degree of emotional discomfort is to be expected.

The key to handling this quick anger is to release your frustrations in a controlled way. Avoid being overly defensive or mean if someone shares their feelings with you. Courage is needed to face what is making you feel threatened.

Lunar eclipse opposite Venus brings the potential for laziness, gluttony, carelessness with money, and indiscretion in love. You will likely want more love and affection but have trouble giving it. If dating, you may have a tendency to lower your standards just to be with someone.

If already attached, tension may arise due to different moods or needs. If your emotional needs are not fulfilled through human contact you may feel an urge to substitute with sweet food, drink, drugs, or spending money.

Venus retrograde also makes giving and receiving love and affection more difficult and can indicate financial stress. Old friends or lovers may reappear or you may relive past life experiences in order to sort out karmic issues. But pleasant destiny encounters are possible and you could find your soul mate, and experience a feeling of inevitability or familiarity.

Venus square Mars increases your sex drive but sexual or competitive tension can cause a lack of self-control, impulsiveness, anger, and conflict. Compromise will help avoid hostility, but a tendency to agree to anything just to get your way could lead to buried anger, frustration, loss, and regret.

If dating, sexy action is possible but take care not to lower your standards or put yourself at risk because of your impatient lust. In a healthy relationship, tension can be relieved through more exhilarating sexual activity. But in a difficult relationship, a buildup of sexual frustration could be expressed as hate, aggression, or an affair.

Both Mars and Venus retrograde are portents of war. So this lunar eclipse definitely increases the risk of war. Venus also rises before the Sun as the morning star, another portent of war. According to Deborah Houlding:

The Mesopotamians knew her, not only as the Goddess of Love and Procreation but also as the Goddess of War, while her periodic re-emergence was associated with the seasonal fertility of the Earth. Her evening manifestation was said to bring men and women to the act of love in bed, but her morning appearance woke them up to go to war. [1]

Although the lunar eclipse is in the Sign of Sagittarius, the image below shows that is lies within the Constellation of Scorpio. Due to the precession of the equinoxes, the Sun Signs are almost a whole Sign out of alignment with the Constellations from which they were named. 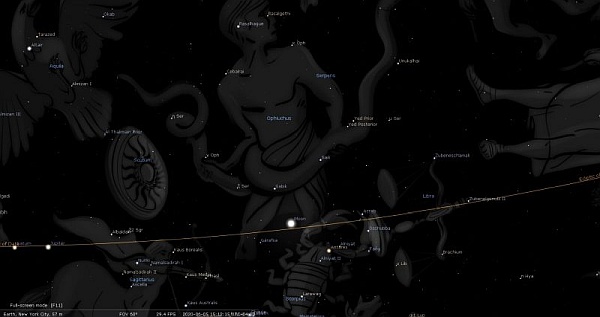 The Scorpius stars are only minor ones but the lunar eclipse is conjunct a major star in Hercules Constellation. Ras Algethi is in the Head of Hercules but in the image above is actually shown in the Head of Ophiuchus.

The small stars in Scorpius listed below are found in the upper joints of the tail. According to Ptolemy, the stars “in the joints of the tail are like Saturn and partly like Venus”. [2] Saturn-Venus is lazy, immoral, shameless, revolting, mean, and causes sorrows in love.

Fixed star Ras Algethi gives boldness and a drive to gain power. Like the Scorpius stars, it has a Saturn-Venus nature. And connected with unhelpful planets (square Mars), “it is said to cause much irritation, especially in connection with the female sex.” [3]

Constellation Hercules gives strength of character, tenacity, and fixity of purpose, an ardent nature, and dangerous passions. [2] The constellation is indicative of events that affect large portions of mankind and presages earthquakes if poorly placed with respect to an eclipse. [4]

The June 5 lunar eclipse is not a good omen for strained relationships. Even maintaining harmony in healthy relationships will require extra effort. Patience and unconditional love are needed to stop frustration and irritation quickly escalating to anger and hostility.

So the lunar eclipse June 2020 astrology could test even the strongest of love relationships. As for enemies, the danger of impulsive actions leading to conflict is very real. The threat of war is amplified by the “boldness and a drive to gain power” from the star Ras Algethi. And “large portions of mankind” could be affected by events like war and earthquakes.

The June 5 lunar eclipse can be viewed from Africa, Asia, Australia, and the Middle East.

If the Lunar Eclipse June 2020 astrology directly impacts your horoscope decan you can read about its effect in your monthly horoscope. For more detail about how it affects your natal chart see Full Moon Transits.

We have 1600 guests and no members online