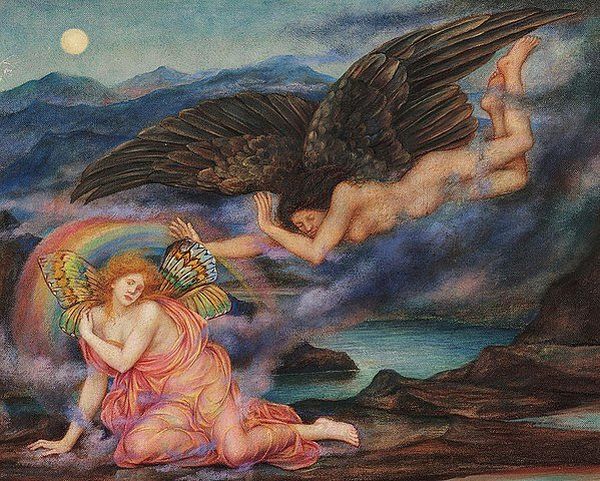 True transformation occurs only when we can look at ourselves squarely and face our attachments and inner demons, free from the buzz of commercial distraction and false social realities.  We have to retreat into our own cocoons and come face-to-face with who we are.

We have to turn toward our own inner darkness.  For only by abandoning its attachments and facing the darkness does the caterpillar’s body begin to spread out and find its light, and beautiful wings begin to form. ~ Julia Butterfly Hill

On May 15th or 16th (depending on where you are in the world) we have a Total Lunar Eclipse at 25º Scorpio 17’. Because of the refraction of the light as it passes through our atmosphere, it will tinge the Moon a deep reddish hue, hence the reason it is called a Blood Moon. The entire eclipse will be visible within the eastern parts of North America, all of South America and the Antarctic, but many parts of the world will be able to see at least some parts of the eclipse (West Africa, the rest of the Americas, Europe and Eastern Pacific), provided the Moon is above the horizon. For the visibility of the eclipse in your area, check the Time and Date website.

The Full Moon Lunar Eclipse is less than 3º from the South Node making it an almost perfect (Total) Eclipse. All the more intense. All the stronger. And because of all the planetary transits to this Eclipse degree all the more extensive. Almost everyone will feel this Eclipse to some degree.

Lunar Eclipses, much like ordinary Full Moons, are times of culmination, release, and revelation. Eclipses have the added quality of unpredictability. Kind of like a higher power sweeping in and rearranging the pieces on the playing board. These are turning points that can change paradigms, and bring long-term consequences to a head. The Lunar Eclipses at the South Nodes often point to those things in society (and in our own lives) that are no longer sustainable, holding us back, or keeping us from evolving. Things that we don’t usually want to talk about, admit to, or want to deal with, and are needing to be released and/or transformed.

South Node in Scorpio has domain over things like death, pain, atrocities, addiction, obsession and the abuse of power and wealth. Those things motivated by Greed, Envy and Wrath will wreak their undoing upon the Earth. And things like War, Weapons, rampant Corruption, Starvation, Rape, and Sexism; all the really dark stuff get tossed into the South Node in Scorpio pot. When we see what has occurred in the Ukraine, and with the undermining of women’s choices in the United States, and the inequality of wealth and power, along with their god-children Plutocracy and Autocracy, we are seeing the stirring up of the South Node in Scorpio.

The South Node conjunct the Moon is in Scorpio, and the North Node conjunct the Sun, is in Taurus. Taurus and Scorpio are financial signs that have ramifications on the global economy. We have been seeing this with the recent sanctions on Russia, the consequences of which have rippled across the globe. Although treacherous for the economy, indirectly this has also been a catalyst towards divesting ourselves from fossil fuels. Better for the economy and better for the Earth.

Humanity’s use of fossil fuels is severely damaging to the environment, causing pollution wherever they are produced, and wherever they are used, causing lasting harm to the climate of our planet. Could the recent sanctions and embargoes be just the catalyst we need to take our stewardship of our planet more seriously? Under the influence of the Taurus North Node we are being asked to pay attention. The habitability of our planet desperately depends on this. Meanwhile our Taurean Mother Earth sings to herself, while patiently waiting.

Whereas the Solar Eclipse of April 30th was very much about the freedom to be able to go in a new direction, the Lunar Eclipse is about acknowledging the things that are standing in the way and preventing us from doing so. What can no longer be ignored? What is no longer sustainable? What do we need to let go of? And where do we need to set better limits? When you see the South Node conjunct the Lunar Eclipse combined with a Saturn square, we need to become undone and let go of the previous shore, before we can reach the other side.

When Saturn is square the Nodes, as they now are, we find ourselves standing between one phase of our lives and the next, between what used to be in the past, and the dawning of our future potential. Mars and Neptune are trine the Lunar Eclipse, and can help us over the threshold. These two immersed in the diluvian depths of Pisces, are washing our feet in the River Lethe, the river of forgetfulness. This can render us oblivious, which is not always helpful. Especially if we wish to learn from the past. But they can also transport us to a much higher, much more altruistic perspective, beyond our own selfish egoic needs and attachments. In order to make a more effective beginning, and to fulfill our purpose we are needing to release those things that are no longer sustainable and supportive, and might actually be preventing us from growing and evolving.

In our own lives we could find ourselves compelled to face things that we would much rather not have to. These could be our own fears, or some sort of unavoidable reality that is looming over us. It takes great courage to do so. But it also affords us the opportunity to take greater control over our own life and choices. So as we stand here in this liminal time of uncertainty and transition, we could find ourselves longing for a past that is already fading. And yet even so, there is this undercurrent of anticipation for a future that holds ever greater promise and possibility.

Image: “Death of a Butterfly” by Evelyn de Morgan

We have 1441 guests and no members online