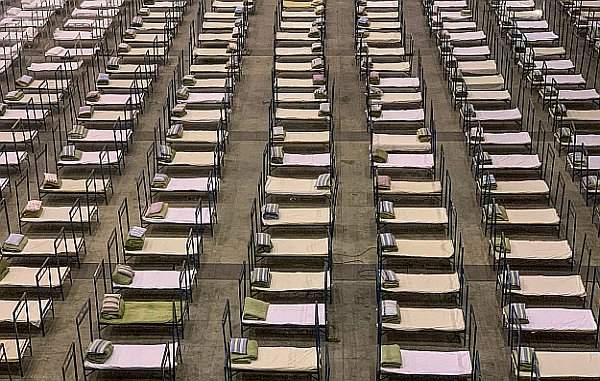 The Taurus new moon on April 22, 2020, brings sudden and unexpected change because it is joined by Uranus. New moon April 2020 is also in a challenging square aspect to Saturn so the changes could be difficult to deal with and may cause suffering and sorrow.

The April 2020 new moon may be in the Sign of Taurus but in the sky, it is in the Horns of the Ram in the Constellation of Aries. This has an aggressive and impulsive influence so it is important to be responsible, patient, cautious and sensible. The best way to avoid tragedy from the coronavirus pandemic is to protect yourself and your loved ones and avoid taking risks.

The April 22 new moon at 03°24′ Taurus is conjunct Uranus which indicates unexpected change. On its own, the changes could be good or bad. But this new moon is also square Saturn, and hard Saturn aspects are the most challenging of influences in astrology.

So new moon April 2020 is just the latest in a series of very difficult moon phases. Reinforcing the challenging nature of this new moon, it is joined by fixed stars that have a Mars-Saturn nature. This planetary combination indicates frustration, anger, violence, cruelty, crime, loss, and disgrace. 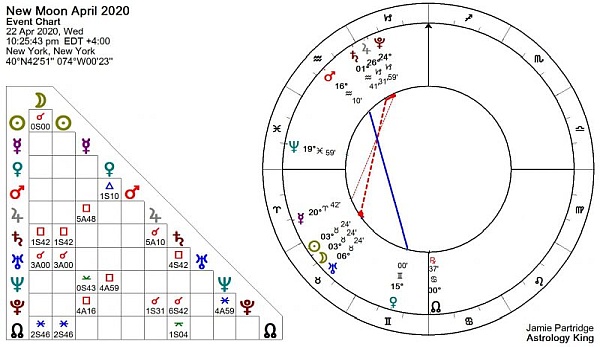 Acting impulsively and taking risks would result in unexpected and unpleasant changes that cause upsetting disruptions to your life. Aggressive reactions, accidents, and chaos are just a few examples.

But doing nothing with this electric and spontaneous energy could also result in the same unwanted consequences. So be flexible and open-minded to adapt to changing conditions. Seek safer options for change and excitement on the internet or through new technology, science and occult subjects like astrology.

New Moon square Saturn suggests the changes caused by Uranus are not going to be positive ones. Saturn imposes restrictions and delays that make it harder to seek the Uranus freedom and excitement you desire.

You may feel restricted or weighed down by new limitations, routines and responsibilities. Isolation, loneliness, pessimism and even depression are possible. You may face criticism and trouble from superiors, problems with authorities in general, loss, and disappointment.

Making progress and reaching your goals becomes increasingly difficult. But you must strive for a strong work ethic, patience and determination to meet your responsibilities. Try not to procrastinate or become distracted. If you ignore your responsibilities during this moon phase they come back to bite you later.

Saturn square Uranus brings sudden changes you don’t want. It also makes it harder to make changes you do want. This can be a very frustrating time of rising tension and sudden, expected changes.

Because of the coronavirus pandemic, this new moon could bring changes in your career, loss of employment, self-isolation, illness, hospitalization, loss, and grief.

This is not the time to resist change, nor is it the time to overreact. A well-considered, methodical, patient and step by step approach is best. Use your higher self-awareness from Uranus to change bad habits and improve your personal hygiene. Take responsibility for vulnerable family members, friends, and neighbors.

Horns of the Ram

New Moon April 2020 is in Taurus Sign but is actually situated in Aries Constellation. This is because the Constellations have moved about 30° out of alignment with the Signs since they were invented over 2000 years ago. See the Precession of the Equinoxes for more detail. 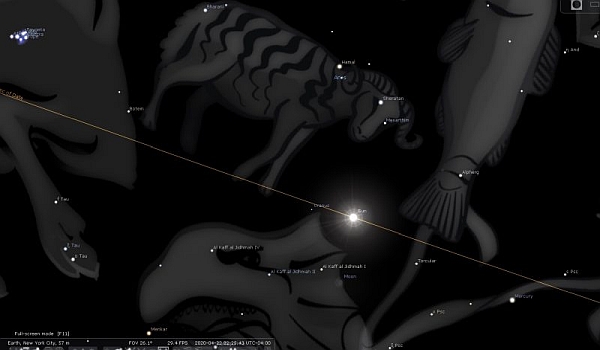 The star chart above shows the new moon and Uranus in the Horns of the Ram. A new moon in Aries Constellation makes you more self-assertive and headstrong with a strong need for independence. It gives strength and initiative but also arrogance and impatience. So remember to listen to advice and think before rushing in.

Fixed star Sheratan causes bodily injuries, unscrupulous defeat, destruction by fire, war or earthquake. [1] It is associated with the throat, the connection between the throat and the head, and the tonsils. [2]

The closest star to the new moon is fixed star Mesarthim. With a Saturn-Mars nature it “shows up more of the protective-administrative quality, less of the impulsive aggressive” of Sheratan which has a Mars-Saturn nature. [3]

This distinction is helpful at the personal and state level for this new moon. However, both stars still have a violent nature and “danger is indicated when acting impulsively and in a foolhardy fashion.” [4]

New Moon April 2020 is conjunct asteroid 18 Melpomene, named after the Muse of tragedy in Greek mythology. A tragedy is “a very sad event or situation, especially one involving death or suffering.” [5]

Find Asteroid Melpomene in Your Chart

The April 22 new moon conjunct Uranus brings sudden changes and the square to Saturn makes them serious and unpleasant. Uranus also makes you want to be free to do your own thing, when and where you please. But the square to Saturn imposes restrictions which can lead to impatience and frustration.

The fixed stars in the Horns of the Ram have an impulsive and aggressive influence. Uranus increases this risk of acting impulsively and of shocking consequences if you do. Saturn would make any consequences all the more difficult to deal with.

New Moon April 2020 is very challenging and asteroid Melpomene will bring tragedy for some because of the coronavirus pandemic. With this new moon on Uranus in the Horns of the Ram square Saturn, it is important to be patient and careful. Avoid taking risks but also be flexible enough to adapt to changing conditions. The April 22 new moon lasts for four weeks up to the May 22 new moon.