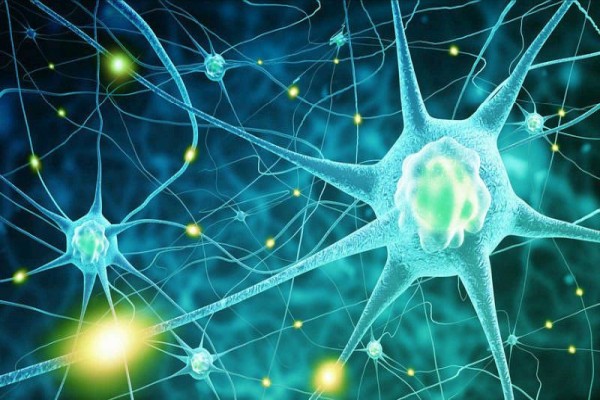 The Leo new moon on Sunday, August 8, 2021, makes a challenging aspect to Uranus. So the spiritual meaning of the new moon August 2021 astrology relates to reacting to unexpected changes in a progressive way with flexibility and self-awareness.

The August 2021 new moon aligns with stars in the Head of the Lion which give boldness, cruelty, and heartlessness. While Uranus with a star in the Sea Monster gives troubles through the opposite sex, and good fortune alternating with misfortune.

The new moon on August 8, 2021, at 16°14′ Leo makes just one major planetary aspect, a challenging square to Uranus. There are no major fixed stars conjunct new moon August 2021 but the small stars in this area of the sky have a malicious Saturn-Mars nature. 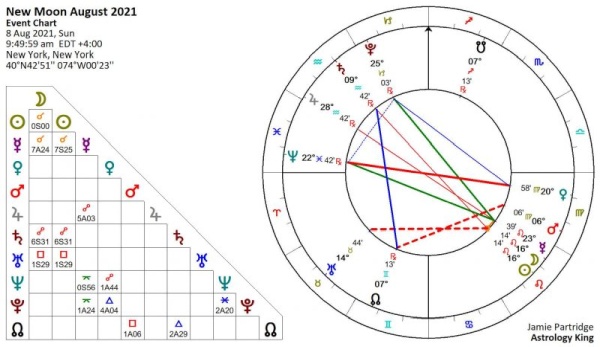 New Moon square Uranus brings sudden and unexpected change, instability, chaos, and revolution. An unsettling feeling of impending change can make you feel excited but also restless, anxious, and nervous. This, in turn, can lead to abruptness, unreliability, impulsiveness, rebelliousness, unpredictable behavior, rapid changes in direction, and even accidents.

This new moon aspect can amplify your ego and pride. You may feel a strong urge to express your true inner self without restriction. But willfulness and arrogance could easily lead to ego conflicts, especially if you take on superiors.

This is not a good time for impulsive changes but you may have to react to change. And the best way to do this is with flexibility, creativity, and inventiveness. Avoid stubbornly sticking to routines if the universe is sending messages that you need to change. Open-mindedness and higher self-awareness can lead to a brave new path with exciting possibilities and opportunities.

The August 8 new moon in the middle of the Sign of Leo. But in the sky, it is located between the Constellations of Cancer and Leo. This discrepancy is due to the precession of the equinoxes. It has moved the Sun Signs almost a whole Sign out of alignment with the Constellations from which they were named over 2000 years ago. 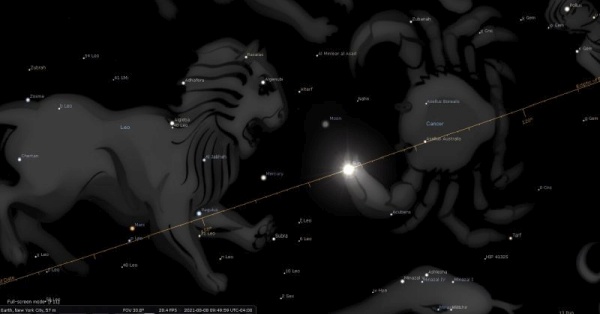 The closest stars to the new moon belong to Constellations Draco the Dragon, Leo the Lion, and Ursa Major the Great Bear:

According to Ptolemy, the stars in the head of Constellation Leo are like Saturn and Mars: Bold, cruel, heartless, adulterous, criminal, liar, loss of estates, poverty, few friends. [1]

In mundane astrology, Constellation Leo is associated with royal events especially the ascension or death of kings and queens, the election or death of heads of state, assassinations uprisings and massacres, currency, the stock exchange, the Vatican, and the European Union.

Constellation Draco the Dragon gives an artistic and emotional but somber nature, a penetrating and analytical mind, much travel, and many friends but danger of robbery and of accidental poisoning. Draco is also like Saturn and Mars. [1]

Constellation Ursa Major the Greater Bear is said to give a quiet, prudent, suspicious, mistrustful, self-controlled, patient nature, but an uneasy spirit and great anger and revengefulness when roused. According to Ptolemy, Ursa Major is like Mars: Violent death, ultimate ruin by folly or pride. [1]

Astrologically both Bears were said to presage an evil influence. They are particularly injurious as regards the affairs of nations and kings. [2]

Menkar on the Nose of the Sea Monster causes disease, disgrace, ruin, injury from beasts, sickness, and loss of fortune. [1] This star has a Saturnine character, corresponding to impediments of many kinds, worries, and tests of endurance; in some, this hardens and toughens the individual. [3]

With Uranus: Active mind, artistic, scientific and mystical interest and ability, troubles through opposite sex, loss through fire and false friends, good fortune and misfortune alternately, severe injuries from animals.

Bill Cosby has natal Uranus conjunct Menkar (0°20′). His “troubles through opposite sex” saw him convicted of sexual assault on September 25, 2018. But his “good fortune and misfortune alternately” saw him freed after his conviction was overturned on June 30, 2021, coinciding with his Uranus return.

The major astrological influence on the August 8 new moon is the square to Uranus which brings sudden, unexpected change, impulsiveness, and rebellion. This disruptive and challenging influence is not helped by the stars in the Head of the Lion which gives cruelty and hard-heartedness. But they also give courage when faced with a sudden change in circumstances. And Uranus will help you do this in an original, tolerant, and very progressive way.

The influence of the August 8 new moon lasts for four weeks up to the September 6 new moon. The best time for making any new changes is during the waxing phase of the moon, from August 8 up to the August 22 full moon.

If The new moon August 2021 astrology directly affects your Sign you can read about it in your free Monthly Horoscope. Finally, for more details about how it affects your natal chart see Sun Transits.