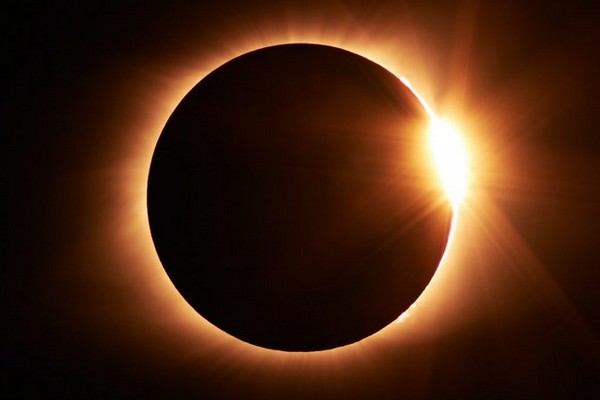 The Gemini new moon on Thursday, June 10, 2021, is an annular solar eclipse. It is conjunct Mercury retrograde and square Neptune. So the spiritual meaning of the new moon June 2021 astrology relates to mental confusion and deceptive communications.

The solar eclipse June 2021 astrology is influenced by fixed stars that give self-confidence and courage, but also a tendency toward recklessness, belligerence, and treachery. What is most needed in the months ahead is caution and honesty. But this June 10 solar eclipse and the May 26 lunar eclipse both bring confusion, deception, and vulnerability.

The strongest influence on the June 10 solar eclipse at 19°47′ Gemini is Mercury retrograde, less than one degree away. The square to Neptune is not so strong at over three degrees orb. But its confusing and deceptive influence is still very significant because Mercury stationed retrograde square Neptune, staying within a two-degree orb from May 25 to June 9. The destabilizing influence of Saturn square Uranus is also a powerful influence on the new moon June 2021 astrology, with an orb of just 0°21′. 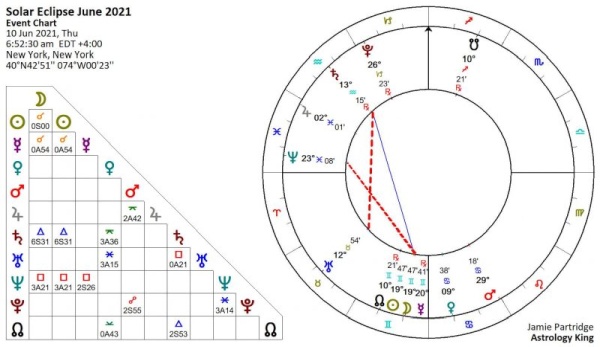 A solar eclipse is just like a regular new moon where the Moon passes between Earth and the Sun. However, a solar eclipse is more powerful because the Moon darkens the Sun. Solar Eclipse June 2021 is an annular solar eclipse so not all of the Sun will be darkened. In this type of partial eclipse, the apparent diameter of the Moon is smaller than the Sun’s, leaving a ring of light around the eclipsed Sun.

The strongest and most important aspect of astrology is Sun conjunct Moon. It gives an invigorating burst of energy and initiative. But it also brings emotional balance, not irrationally emotional, and not too cold and calculating. It means all possibilities are on the table and you can rightly put yourself at the forefront of new plans for the future. So this is an excellent time for making a fresh start, turning over a new leaf, or starting a new project. You can also question old habits, behaviors, and beliefs as you search for new and inventive ways to make progress.

Solar Eclipse conjunct Mercury puts the focus on your thinking and communications, and short-distance travel. Expect an increase in personal interaction in your neighborhood, with siblings, schools, and over the internet. So this will be a busy eclipse phase with lots of appointments, correspondence, meetings, social activity, new information to process, and decisions to make.

This alignment would normally enhance your rational thinking, communication, and social skills. However, with Mercury in retrograde motion and this eclipse square Neptune, your thought processes are likely to become distorted leaving you vulnerable to confusion and deception.

Mercury retrograde brings communication and technology breakdowns, nervous anxiety, travel delays, and lost items. You can also expect to dwell on things, reminisce about the past, or unexpectedly meet up with people from your past.

Take extra care with your words and try not to react too quickly in any arguments or if provoked. Double-check all of your emails and posts before hitting the send button. Business negotiations will be in a state of flux so be extra careful about signing contracts. Some important details will not yet be available, and others may be unreliable or dishonest.

Solar Eclipse square Neptune can have a weakening effect on your vitality, making it hard to get motivated or enthusiastic about anything, especially hard work. Events or other people can cause confusion and disappointment. You may feel insecure, guilty, and apologetic.

Personal relationships may be subject to dishonesty and deception. Secrets will be harder to keep and harder to uncover. Seeing only the best in people increased the chance of becoming disillusioned or worse. Over idealization and gullibility can lead to loss, scandal, or slander. To counter these deceptive influences you must be above-board in all of your dealings

You could also be more susceptible to some psychological and health issues. Paranoia and hypochondria are possible but you may also be more susceptible to infection and poisoning. Health problems may be difficult to diagnose or there may be a misdiagnosis. Religion and other forms of spirituality or ceremony will help out if you start to lose faith.

Mercury square Neptune causes confusion, deception, insecurity, and misunderstanding. Distorted thinking can complicate discussions and business dealings. So it is important to listen carefully and speak in simple, clear terms. Allow no room for misinterpretation. If you must deal with any important business, government, or legal matters, seek professional advice or help from a trusted friend.

You really must avoid treachery and scandal. Even little white lies could lead to major embarrassment or the need for more convoluted cover-ups. Avoid conspiracy theories or strange and extreme spiritual and religious views. Protect yourself against loan sharks, pushy salespeople, cult leaders, and psychic vampires. You may be more susceptible to inflection, poisoning or overdose.

Saturn square Uranus climaxing on June 14 brings restrictive change or unexpected restrictions to the Solar eclipse June 2021 astrology. It can bring change that you don’t want. It also makes it harder to make the kind of changes you do want.

This can be a very frustrating time of rising tension and sudden, expected changes. But it does not have to be like that. If you stay open-minded, patient and flexible, what at first seem like challenges, can be turned into opportunities to rid yourself of negative, restrictive, and limiting things in your life.

The New moon June 2021 solar eclipse in the Sign of Gemini is actually located between the horns of the Bull, Constellation Taurus. This discrepancy is due to the precession of the equinoxes which has moved the Sun Signs almost a whole Sign out of alignment with the Constellations from which they were named over 2000 years ago. 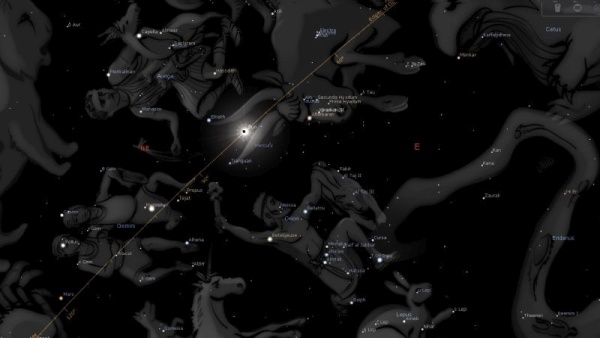 But as the list below shows, this eclipse does not align with any major stars in Taurus. It is constellations Orion and Auriga that have influence over the new moon June 10 astrology.

Constellation Auriga is like Mars and Mercury (high enterprise, combative, destructive.) It gives self-confidence, interest in social and educational problems, happiness, fondness of country life, interest in teaching or the upbringing of young people, but the danger of great vicissitudes. [1]

Auriga is one of the most fortunate constellations in the sky, but may still portend earthquakes if situated unfortunately as regards a solar eclipse. [2]

Constellation Orion is said to give a strong and dignified nature, self-confidence, inconstancy, arrogance, violence, impiety, prosperity in trade and particularly by voyages or abroad, but danger of treachery and poison. [1]

Orion is the constellation of war and gives arrogance, rebellion, strength, and courage. It also has a direful influence on agriculture and presages violent storms and much rain. [2]

Fixed star Bellatrix gives great civil or military honor but the danger of sudden dishonor, renown, wealth, eminent friends, and liability to accidents causing blindness and ruin. It makes women lucky, loquacious, and shrewish, with a mighty tongue, or a high-pitched, hard, and sharp voice. [1]

Bellatrix is like Mars and Mercury. So it gives quick decision-making, with thoughts and plans being realized with energy, courage, fighting spirit, strategic talents, ability to organize, and discrimination. But also, often the reckless aggressiveness of a belligerent daredevil. Advancement and success are possible if the positive properties can be drawn out. But those who succeed always have to allow for being surrounded with envy and hatred. [3]

The name Bellatrix means the Female Warrior or the Amazon Star. It gives great courage but a tendency to fight futile or lost causes if not well-aspected. [4]

The fixed stars joining this eclipse do provide the self-confidence, courage, and discrimination to counter the deceptive influences of the planetary aspects. But they also give a tendency toward rushed thinking, belligerence and recklessness. They increase the risk of envy, hatred, treachery, and poisoning, as well as earthquakes and violent storms.

The June 10 solar eclipse combined with the May 26 lunar eclipse form an eclipse phase that lasts until the lunar eclipse on November 19, 2021. The lunar eclipse is causing a test of faith due to greed, excess, immorality, deceit, crime, and disease. Confusion, deception, and vulnerability are common to both eclipses.

The June 10 annular solar eclipse will be visible from parts of northeastern Canada, Greenland, the Arctic Ocean (passing over the North Pole), and the Russian Far East. The solar eclipse will appear partial in northern and eastern North America, most of Europe, and northern Asia. 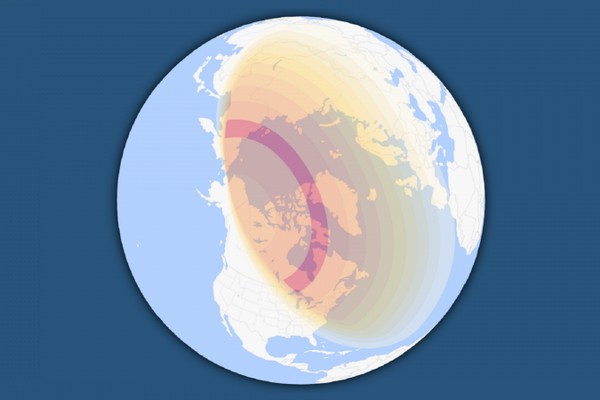 If the solar eclipse June 2021 astrology directly impacts your horoscope decan you can read about its effect in your monthly horoscope. For more detail about how it affects your natal chart see New Moon Transits.

We have 1143 guests and no members online