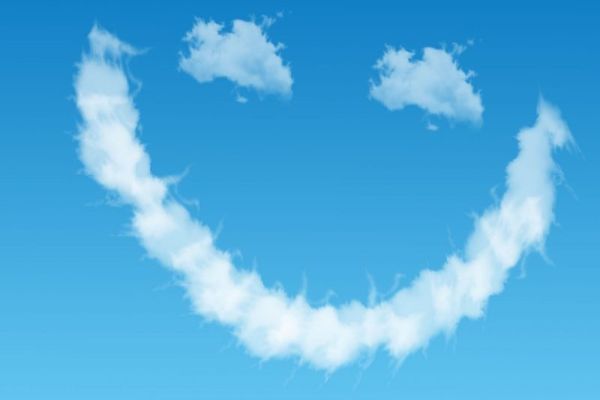 The Pisces new moon on March 2, 2022, joins Jupiter which is a very fortunate alignment. The meaning of the new moon March 2022 astrology relates to personal, material, and spiritual growth.

The March 2022 new moon is also sextile Uranus which adds exciting and unique opportunities for Jupiter’s growth and good fortune. There are also two other alignments of planets that make this a very intense and potentially challenging new moon. But there is reason to be optimistic with Jupiter joining a fixed star that promises happiness and success.

The new moon on Wednesday, March 2, 2022, at 12°06′ Pisces is conjunct Jupiter and sextile Uranus. This fortune and philosophical influence is enhanced with Jupiter conjunct a Jupiter-natured fixed star. But a very powerful, intense, and potentially harmful influence comes from two more sets of conjunctions:

That only leaves Uranus and Neptune that are not involved in conjunctions. 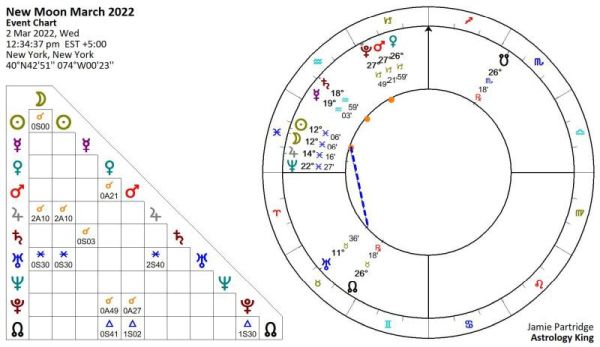 New Moon conjunct Jupiter (2°10′) is a sign of good fortune. It encourages material, personal and spiritual growth. Sometimes this alignment can expand or amplify negative Jupiter qualities like greed, excess, and immorality. But the positive sextile to Uranus ensures good intentions, prosperity, optimism, and generosity.

So this is a good new moon to expand your horizons and better yourself. You can improve your health, wealth, and happiness, especially through long-distance travel, higher education, the law, business, philosophy, religion, and spirituality.

New relationships, investments, or the beginning of any new projects are favored. A new moon is generally is a good time to start something new. So a new moon conjunct Jupiter in good aspect greatly increases the chance of success.

This is a good new moon to follow your intuition and take risks. You could meet unorthodox types of people or someone from a different cultural or ethnic background than your own. Curiosity and inventiveness allow you to make new discoveries and find new ways of doing things that can lead to greater efficiency.

Mercury conjunct Saturn (0°03′) adds a sense of seriousness and heavy personal responsibility to this new moon. This is a very strong influence because of the tight orb. It is exact only one hour before the new moon.

There is the potential, therefore, for the pessimism of this conjunction to outweigh the optimism of Jupiter. Meanness, criticism, bad news, isolation, and depression are possible. The best way to avoid this is to apply your mind to serious or challenging work.

Venus conjunct Mars (0°21′) is a very passionate and creative influence on the new moon March 2022 astrology. It increases your sex drive and makes you more attractive. Increased charisma and spontaneity should help overcome any Mercury-Saturn inhibition to make socializing more enjoyable and exciting. This is a good influence for romance as well as physical creativity like dance and sculpture.

Venus conjunct Pluto (0°49′) makes you love more deeply and care more passionate about those things that you love. An increased need for love and affection can deepen a love relationship. If single, instant attraction could lead to a life-changing karmic relationship. But there is also a risk of obsessions and compulsions getting out of control. Guilt-tripping, possessiveness, spying, and jealousy are possible.

Mars conjunct Pluto (0°27′) intensifies your ambition, sex drive, and lust for power. This massive surge of desire combined with the intense love of Venus-Pluto could be difficult to control. Aggressive and ruthless behavior is possible. This could lead to threats, intimidation, outbursts of rage, rape, and war.

Venus, Mars, and Pluto together create such intense and powerful energy that it must be used purposefully and constructively to avoid the uncontrolled and destructive release of energy. Working independently on something you are passionate about would be helpful. A burst of creativity can be used to make major transformations in your life. Use your increased power and influence wisely.

New Moon March 2022 is in the Sign of Pisces. But as the star map below shows, it is actually in the Constellation of Aquarius. This discrepancy is due to the precession of the equinoxes. It has moved the Sun Signs almost a whole Sign out of alignment with the Constellations from which they were named over 2000 years ago. 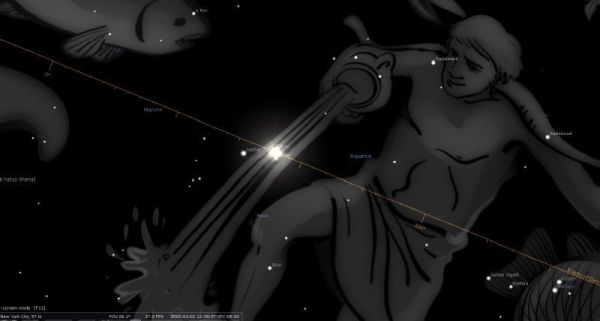 No major fixed stars align with this new moon. But there is a named star in the stream of water above that does. Lambda Aquarii, Hydor (11♓52) is adjascent to the Sun (12♓06). The name Hydor comes from the Greek Ὕδωρ “water”.

According to Ptolemy, the stars “in the stream of water have power similar to that of Saturn, and moderately to that of Jupiter” [1]. And according to Robson, Saturn-Jupiter has a dignified, pious, conservative, acquisitive, and retentive influence. [2]

Jupiter in the River

Jupiter (14♓16) is conjunct Alpha Eridani, Achernar (15♓36). Fixed star Achernar gives success in public office, beneficence, and religion. It has the same influence as Jupiter and is symbolized as the Cherub and Sword. [1]

Achernar, on the End of the Eridanus River, possesses a Jupiter nature with a dash of Mars-Uranus character. Well placed, it promises happiness and success by giving good morals, faithful adherence to one’s religious beliefs, or a philosophical inclination. According to tradition, Achernar is credited with bestowing high offices in the church, especially if conjunct Jupiter. [3]

Constellation Eridanus the River gives a love of knowledge and science, much travel and many changes, a position of authority, but danger of accidents especially at sea and of drowning. [1]

The March 2 new moon does have a positive influence because of the conjunction to Jupiter and sextile to Uranus. This optimistic, futuristic and progressive is enhanced by fixed star Achernar:

And Achernar is well placed with Jupiter, conjunct new moon, and sextile Uranus. While the new moon (Sun conjunct Moon) is by far the strongest influence, the other conjunctions are strong and require a conscious effort to be used constructively.

This can be done by using Mercury-Saturn to focus intently on a particular goal. Venus-Mars-Pluto can be harnessed to channel your greatly intensified desires into that goal. Then you can take full advantage of exciting opportunities for growth that the Jupiter new moon sextile Uranus brings.

The influence of the March 2 new moon lasts for four weeks up to the April 1 new moon. The best time for starting new projects is during the two-week waxing moon phase, from March 2 to the March 18 full moon.

If the new moon March 2022 astrology directly affects your Sign you can read about it in your free Monthly Horoscope. Finally, for more details about how it affects your natal chart see Sun Transits.