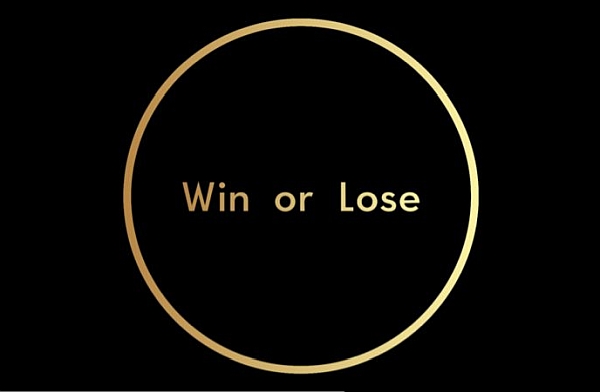 The New Moon on Tuesday, November 26, 2019, at 4° Sagittarius brings chaotic change and rebellion. New moon November 2019 is directly linked to Mars opposite Uranus, one of the most disruptive influences in astrology.

The November 2019 new moon aligns with a star that offers power, money, and success. But only for those who react with forethought and strategy to the rapidly changing conditions ahead. There will be winners and loser in this high stakes moon phase, the last new moon before the December 26 solar eclipse.

The November 26 new moon at 04°03′ Sagittarius is most affected by Mars opposite Uranus, a very disruptive influence. The chart below shows the new moon linked to this red opposition by green aspect lines. The quincunx aspect creates anxiety and indecision about how to react to Mars anger and Uranus change.

The new moon is also influenced by stars in Scorpio Constellation that bring opportunities for promotion, wealth, and success. But they also indicate impediments along the way and difficulties staying on top. 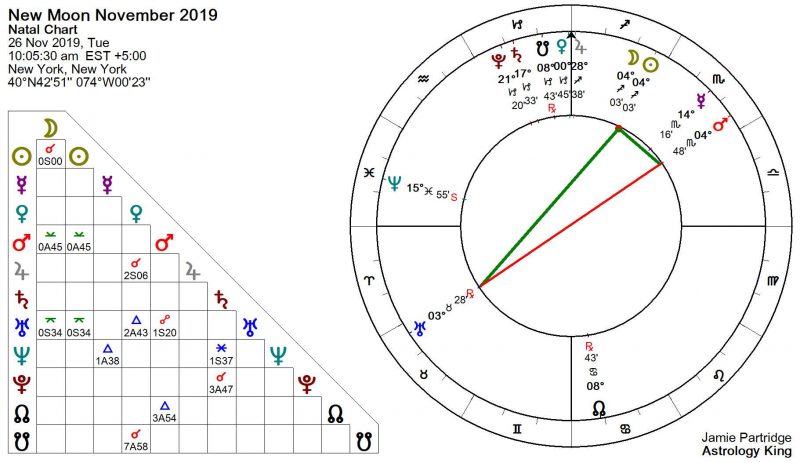 Mars opposite Uranus brings irritation, hostility and rapid unexpected change. Anger and resentment can easily boil over into rash actions and temper tantrums. Impulsiveness and disregard of tradition could lead to rebellion, breaking free from responsibilities and obligations.

This explosive energy can cause disruption, nervous irritability, personal attacks, accidents, and violence. So think twice before lashing out and reacting to provocation or frustration. If you must defend yourself against enemies, use forethought and seek guidance. You must be extremely careful if you wish to go on the attack.

At 04 ♏ 48, Mars is in the same place as the October 27 new moon (04 ♏ 25). The October 2019 new moon, also opposite Uranus, had a shocking, unpredictable and erratic influence. It made people restless, impulsive and crazy. Now Mars is reenergizing this extremely sensitive degree, and the November 26 new moon extends that explosive influence for another 28 days.

Sun quincunx Uranus can make you nervous, tense and anxious. A buildup of energy can feel exciting but also scary. This link to Mars opposite Uranus makes it extremely difficult to relax, especially if your freedom has been restricted or your creative self-expression blocked.

Pressure to change may come from someone with some power over you, changing circumstances or an unexpected event. You may have to change your routine, behavior or plans. It is important to be flexible and adapt to changing conditions. An adjustment is needed whether you are forced to make changes or you find a different way forward yourself.

The triangle aspect pattern highlighted in the new moon chart above is called an irritation triangle. According to Joyce Hopewell:

These are touchy, tetchy figures and are seen in the charts of people who are flexible, hard-working, and sensitively aware. These people can often take on more than their fair share of work, but sometimes they take on too much, reach a breaking point and explode. Those around them take cover until the storm passes, and then things calm down quickly as the person returns to what they were doing, feeling a whole lot better having worked their angst and irritation out of their system with the outburst. [1]

The November 26 new moon falls in the Sign of Sagittarius (04 ♐ 03) in our Tropical Zodiac. But the Precession of the Equinoxes has moved the Sun Signs nearly a whole Sign out of alignment with the Constellations from which they were named, over 2000 years ago. This is why the star map below shows the new moon in the Claws of the Scorpion. Astrological influence comes from these stars in the Constellation of Scorpius. 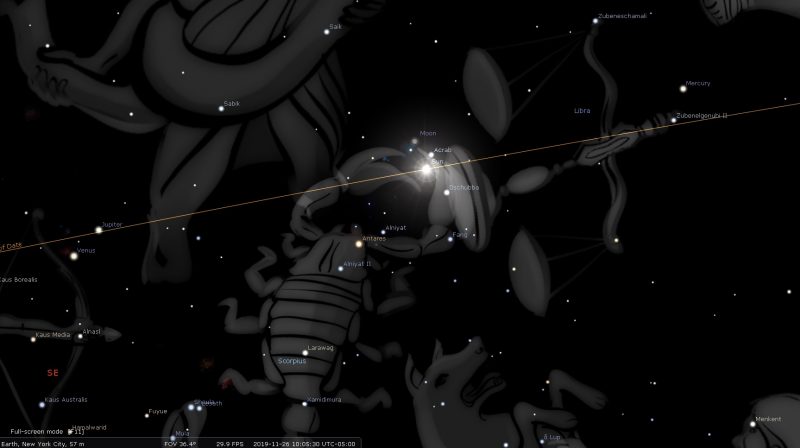 The list below shows the new moon between two stars only 0°10′ apart; Omega1 and Omega2 Scorpii. Together, these stars are called Jabhat al Akrab, from the Arabic جبهة العقرب “forehead of the scorpion”. In China they are called Kow Kin “Hook and Latch.” [2]

In Cook Islands star lore, this pair of stars represent twins who flee their parents into the sky. The girl, who is called Piri-ere-ua “Inseparable”, keeps a tight hold of her brother, who is not named. [3]

Ebertin said it gives “the ability to do research, especially into things of a particularly secret and hidden nature.” But also lying, treason, difficulties, impediments, or loss. [5]

New Moon conjunct Acrab: Great power, honor, wealth, promotion, and gifts. But success comes after many difficulties and there is danger of violence, trouble, and sickness, with benefits seldom lasting. It also gives a materialistic nature, an overactive mind, interest in unpopular ideas, criticism and difficulty in obtaining legacies. [4]

The 4th Chinese lunar mansion – 房 (Fáng) the Room (03 ♐ 12 to 08 ♐ 03) is a lucky mansion. It is the opener of that which is closed and connected with the Great Sacrifice of burnt offerings. Good for building, with the proprietor being able to increase holdings, build extensions, and acquire gardens and surrounding land. Investment, development and interior decoration are also favored.

The Room presages luxuries, happiness, longevity, health and general material increase. It is even lucky to bury, with one’s ancestors being willing to assist in finding promotion, riches, and official recognition for the family. Couples who marry now can expect the birth of a boy. If a man takes a mistress, a son will be born in three years. [6]

When the Moon is 2-5 degrees below the ecliptic in this mansion, there is calm and peace. When it is north of this, there are many events connected with the yin principle. When it is south of 5 degrees, there is drought and mourning. [7]

Referring back to the star chart, you can see the moon is above the ecliptic so the yin qualities apply:

The new moon on November 26, 2019, will cause change and upset. Mars opposite Uranus is one of the most disruptive of all influences in astrology. It makes people angry, impulsive and rebellious.

The new moon quincunx Uranus adds even more tension and anxiety but it does offer an outlet for the chaotic energy. The quincunx aspect is like a see-saw. It can make you indecisive but in this case, it is better to weigh up your options carefully before acting.

The irritation triangle amplifies the highly-strung nature of the aspects. Open-mindedness and flexibility will allow you to choose the best of the opportunities created by the chaotic changes ahead.

Fixed star Acrab adds to the high stakes nature of the aspects. There will be opportunities to gain power, increase your wealth and defeat your enemies. But you have to use strategy and play your cards right to succeed and stay on top. There will be winners and losers from this new moon and there is a lot to play for. It will not be easy to undo what happens during this moon phase.

This is the last new moon of the current eclipse cycle which began with the July 2 solar eclipse. This means new moon November 2019 is the last chance to act on the goals you set back then, and complete what you have been working towards in the last 6 months. The July 2019 solar eclipse offered good health, honor, and riches. With patience, open-mindedness, and hard work you can still make your dreams come true.

The effects of the November 26 new moon last four weeks up to the December 26 solar eclipse. The best time for making a fresh start and for beginning new projects is during the first two weeks of this new moon cycle. This waxing phase of the Moon lasts from November 26 to the December 12 full moon.