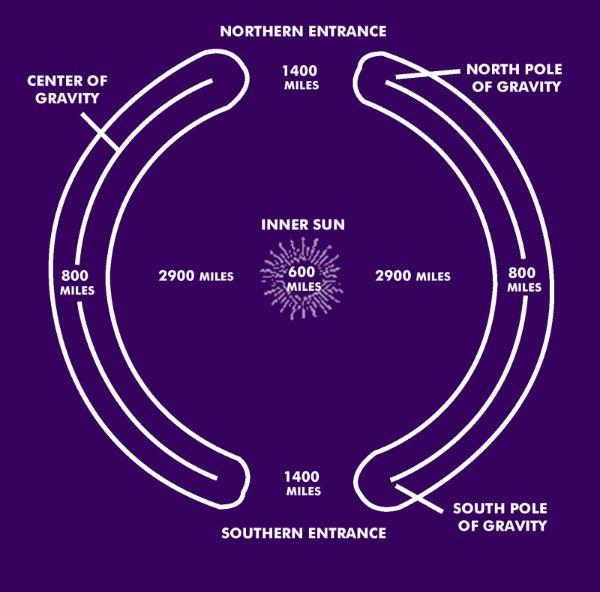 All Planets are HOLLOW, with openings at the North and South Poles. They have put a force field over the Polar Openings to camouflage the entrances to protect them from land and air sightings. Over 95% of the starships that people see, come from inside our Hollow Earth, and not from other planets. These starships transport supplies to TELOS, a subterranean city inside Mt. Shasta in California, and to the other 120 Subterranean Cities located a few miles beneath the Earth’s crust, called the Agartha Network.

The lenticular clouds that people see hovering over Mount Shasta are created inside the Mountain to camouflage the coming and going of cargo ships from inside the Hollow Earth.

Our Spaceport is located inside the Hollow Earth, in direct alignment with the openings at the North and South Poles. We are not stuck on the Earth as you are, but can leave whenever we desire. We are not limited in movement, and can travel throughout the Universe at will. There are no physical constraints, for we apply the Universal Laws of Energy and use the already existing highways throughout the Universe. We can’t get lost, for all is mapped out and all is in constant communication with all in existence. We just tap into this “live” network that is always broadcasting and move through it effortlessly.

We are not isolated from the rest of life in our Universe—you are. We are not restricted in movement—you are.

As we are here in the Center of Earth’s interior, you are here with us in consciousness. For consciousness is a “place”—a place more solid than your physical places. So yes, you sit on the surface at your desk taking this dictation, but in consciousness you are with us inside the Hollow Earth. You are literally in two places at once. Do you understand multidimensionality now? Now that you are in both places simultaneously, we will show you around “our place”. As you scan our landscape, you will “see” the openings of the Holes at the Poles. These openings are wide enough for some Mother Ships to enter. You can “see” the Spaceport, spread out for hundreds of miles in a circle interspersed with flowers, grasses, bushes, trees, and waterfalls. It does not look like your barren, concrete airports, devoid of life; but rather like a garden with space shuttles and starships nestled peacefully inside our world. 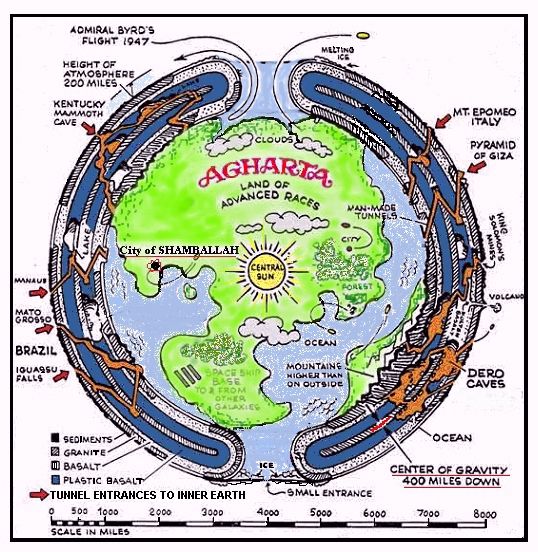 We hardly know when they come and go, as they do not emit any harsh sounds, and we hardly detect any sound when they land or take off. They are in complete harmony with our love vibration and move in silence. We can visually see their movements as they gracefully fly in and out through the Poles. But this is the extent of it. There is no disturbance in sound or vibration, and there is no pollution and no destruction of our environment. This is quite a contrast from your surface airports, isn’t it?

And, we never have “crashes”, since every component of our craft is monitored by our amino-acid computers, and we detect and correct any problem immediately. Our technology is far advanced from yours, for we’ve had the opportunity of peaceful living conditions to continuously develop it for millennia, without a break in our life spans. This is why your Immortality is so crucial. The longer you live in the same body, the more you can develop your talents and technologies, and the more you can create and refine things, rather than stopping and starting over again in each succeeding lifetime. All this stopping and starting over and over again gets you nowhere. You are continuously “reinventing the wheel”, and never moving beyond it. It is stagnation in evolution, getting you nowhere.

This is all ended now, as Mother/Father God of this Universe has sent an edict that Earth has to move on, and can no longer hold the rest of the Galaxy back. All the other planets in your Solar System have already ascended, and it is only Earth that the whole Milky Way Galaxy has been waiting for. The laggards won’t be able to hold Earth back any longer. From now on, all laggards will incarnate on an isolated planet where they won’t be allowed to interfere with the evolution of a species, planet, Galaxy, or Universe again. This is the edict that has been handed down from our Great Central Sun, Alpha and Omega.

Soon you will be feeling only bliss, as all negative forces and destructive entities will be leaving en masse through death, and exiting out of your Universe. The long suffering is over, and you will be free at last, and will experience life as it was always meant to be experienced. You can feel this bliss now; feel the anticipation now, and bring it into your lives now—for it is already here, and will be getting stronger and stronger each day. Each day see your world through the eyes of Love and know in your heart that this is the future for Earth. I am Mikos, always directing my Love to you.

We have 1154 guests and no members online