Delusion of Control - Card of the Month - November 2021 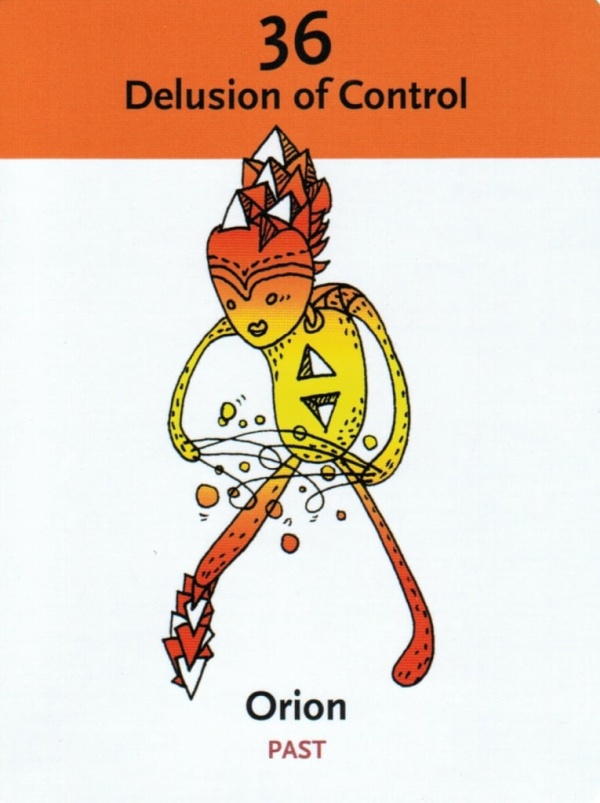 Rather than discuss this card from the galactic history perspective, it is most important to understand its implications on an evolutionary level that have to do with species evolution. In order to do so, let us review some information we have shared in the past about humankind’s transition from third to fourth density.

Third density consciousness is based heavily on polarity, in which reality is seen as black or white, good or bad. This is one of the most separated states of consciousness possible. When a species is entrenched in this state of consciousness, it is driven by the energy of the solar plexus. The solar plexus provides the fuel for the will. The false self (ego) uses the will in order to push itself through a challenging reality by focusing on “getting” what it needs such as whatever is needed for survival at the most basic level. This extends to more abstract needs such as feelings of protection, safety, and recognition. In the most separated times of third density, the ego begins to believe that it controls reality and does whatever is necessary to get what it wants. This is often a subtle program that runs in the background for most people. However, in those you consider narcissists, the behavior is obvious for all to see.

As a species transitions to fourth density (which is a more integrated and less polarized consciousness state), the solar plexus energy weakens and the energy of the heart strengthens. This can cause a type of panic to arise in which the weakening ego fights for its survival. (You are seeing this happening on Earth now). The ego starts to realize that its previous belief that it can control reality was just a delusion. As the ability to control reality appears to wane, the ego panics even more, and a type of internal battle happens between the awakening 4th-density self and the weakening ego. In an attempt to continue its survival, the ego begins to envision enemies all around it. These “enemies” seem to be attempting to take away one’s “freedom.” In reality, this perception is simply the weakening ego’s terror that it is losing its grip on controlling its destiny. The biggest delusion here is the belief that one could ever control one’s destiny. The ego has very little power to control or direct anything, despite its belief that it has free will. This idea is resisted and often produces much terror in transitioning species.

When we say that “the energy of the heart strengthens,” what do we mean? We are not talking about feeling love and walking around in a state of bliss, although that can be a byproduct. We are talking about one’s ability to plug into the natural flow of the universe and be empowered by that flow rather than feeling like a victim to it and fighting against it. Only egos feel like victims. As the energy moves from the solar plexus to the heart, one begins to feel rooted in this universal flow and this creates a great sense of peace, no matter what is happening “out there” in the world. As long as the ego is thrashing about, complaining that it is being controlled, one will never make that shift from solar plexus to heart-centered energy.

In the current circumstances on Earth, humanity is being given an opportunity to make this transition away from the ego-centric belief that it can control everything, to the true state of freedom which, paradoxically, means letting go of all delusions of control. To the ego, this feels like entering a black hole. It is terrifying. The ego will cling to any belief, even obviously false ones (such as those propagated on social media for example), to support its need to feel in control (or as a victim) so that it never has to face its fears of that black hole.

Though it may not feel like it to you now, this is a precious, sacred time on Earth. It is one that all galactic species face as they transition. It is a time of death and rebirth. It is a time full of paradox. The biggest paradox? The more you let go of trying to control your reality, the more you feel empowered. This lesson often takes a long time to learn and though your species is struggling with it, you will eventually stop the thrashing and let go. Sometimes you don’t stop thrashing and resisting until you exhaust yourselves and then finally let go and be at peace. No matter how you walk this road, the Orion masters of light (who integrated polarity and made this transition in the ancient days) are silently supporting you. Look to them in your meditations and prayers, for if you allow it, they can help you walk this painful and beautiful road Home.

We have 1734 guests and no members online