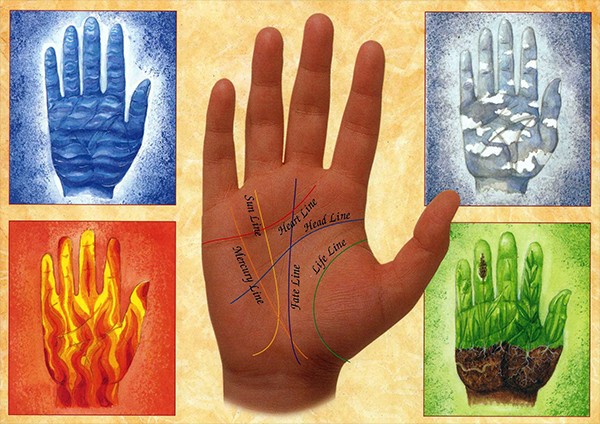 Palmistry is an ancient art wherein its practitioners and followers believe that the past, present and future are all written in the lines in the hands.

"To see a world in a Grain of Sand,
And a Heaven in a Wild Flower,
Hold Infinity in the palm of your hand,
And eternity in an hour." - William Blake

Do we hold the secrets of our past, present, and future in the palms of our hands? Are those mysterious lines traced on our hands the blueprint of our character, our fortune, and our destiny?

The ancient art of palm reading, also called palmistry or chiromancy, dates back thousands of years. Prehistoric caves in Spain and France have hands drawn on their walls with all the major lines shown in amazing detail. Taking into consideration the number of such paintings of hands in prehistoric caves, it is quite evident that Homo sapiens have been fascinated by the human hand since the Stone Age. Archaeological finds have uncovered hands made of ivory, stone and wood by ancient civilizations. Information about the practices and laws of reading the hand has been found in ancient Vedic scripts of India, early Semitic writings, and the Bible. Aristotle, one of the greatest Greek philosophers, who lived in 384-322 BC, found a dissertation on palmistry on the altar to the Greek deity, Hermes. Galen and Hippocrates, both Greek physicians, were well-versed in the use of palmistry as an aid to healing. It is also said that Julius Caesar used palmistry to judge his men.

Fortunetellers, or palm readers, believe that the lines and patterns in an individual’s hand, if read properly, can reveal insights into the events of the past, present, as well as future of the person. Apart from the lines, there are various other factors taken into consideration in palm reading, such as the hand’s shape, the shape and length of the fingers, how flexible the fingers and hands are, the thumb’s position, the mounts, which are interpreted by their relative sizes and the intersections on them, and other qualities. In some palmistry traditions, palm readers also examine the characteristics of the nails of the fingers, fingerprints, the skin patterns on the palm, the color and texture of the skin, and so on.

A palm reader starts with the obvious and carries on via innumerous intricate steps of interpretation and judgment, to minute details. The conclusions that are made are not about certainty, but of the tendency or probability. A practitioner of palmistry usually starts by studying both hands; if you are a right handed person your left hand is thought to be the ‘birth hand’, which reveals character predispositions that are inherited, while the right hand is considered as reflecting individuality, potential, and flexibility. For left handed people, it’s the other way round.

Here is a general explanation of the various types of hands, according to palmistry:

According to palmistry, there are six lines of high importance on the palm. By reading and interpreting these lines, an individual’s character, personality, and the path he or she will choose in life can be understood. The six lines are separated into two groups: the three major lines and three minor lines.

The three major lines are: The Life Line; The Head Line; and The Heart Line.

The three minor lines are: The Fate Line; The Health Line; and The Sun Line, which is also called the Line of Apollo.

Some people have all the three lines, but that is not usual. Deeper understanding about the individual can be discerned, depending on which other lines crisscross these lines. Another interesting factor is that lines keep changing, although most of us may not discern the changes. Also, where each line begins and ends is very important.

Girdle of Venus and Bracelets

The two other lines that are considered important are the Girdle of Venus and the Bracelets.

The Girdle of Venus is positioned on the upper portion of the palm and runs from the index finger to the little finger. While in some people a complete ring is formed by the Girdle at the base of the fingers, in some hands it does not occur at all.

The Bracelets, which are also called Rascettes, are the bands of line that can be found at the base of the palm, on the wrist. If the bracelets are high up it is considered to be a sign of weakness of the internal organs.

This ancient art of palm reading is thought to be a pseudoscience by many today, because it is considered to be based on unproven theory rather than science, and since none of its claims can be verified by scientific testing. However, according to recent research, it has been shown that there is indeed an uncanny link between the lines on the hand and how a person’s life manifests itself.

In fact, Cheiro, who lived in 1866-1936, who popularized palmistry by his books like ‘The Language of the Hand,’ displayed startling clairvoyance by predicting accurately events that were to happen to several famous personalities like Prince Edward, Joseph Chamberlain, General Kitchener, Sarah Bernhardt, Mark Twain, Oscar Wilde, and Marilyn Monroe, simply by reading the lines on their hands. Oscar Wilde was so amazed by his encounter with Cheiro that he wrote a short story based on it, ‘Lord Arthur Saville’s Crime.’

While many are convinced whole heartedly about palmistry having the ability of foretelling the future, yet others of a more skeptical bent of mind associate it with magic and sorcery, and hence dismiss it.