Remote viewing is a mental faculty that allows a perceiver (a "viewer") to describe or give details about a target that is inaccessible to normal senses due to distance, time, or shielding. For example, a viewer might be asked to describe a location on the other side of the world, which he or she has never visited; or a viewer might describe an event that happened long ago; or describe an object sealed in a container or locked in a room; or perhaps even describe a person or an activity; all without being told anything about the target -- not even its name or designation.

Most reports of paranormal events come from outside the science lab, and when research is done on these cousins of RV, it is somewhat like examining the natural history of some specimen brought in from the wild. When clairvoyance (RV's closest relative) was done under controlled conditions for research purposes, it was generally targeted at such things as cards or colors, since these sorts of targets allowed easy scoring of experimental results. Remote viewing, on the other hand, was actually developed and first explored in a research setting (more about this in the history section). And the sorts of targets used for RV research differed from those typically used in other psi research. Targets chosen for "viewing" include geographic locations, hidden objects, and even such things as archaeological sites and space objects about which it was expected that ground truth would eventually become known, so that the viewer's accuracy could be checked.

Unlike most other psi disciplines, remote viewing is not precisely one thing, but rather an integrated "cocktail" of various phenomena. Despite the "viewing" part of the term, remote viewing is only partly about experiences associated with what might be visible about a target. It also involves mental impressions pertaining to the other senses, such as sounds, tastes, smells, and textures, as well as limited telepathy-like effects, and in some cases just plain intuitive "knowing." RV owes some of these qualities to the fact that lessons learned from research in clairvoyance, telepathy, and even out-of-body experiences -- traditionally considered separate disciplines -- played a role in its development.

In remote viewing, the viewer not only verbalizes what he or she is perceiving, but usually also records in writing, in sketches, and sometimes even in three-dimensional modeling the results of the remote viewing episode, or "session."

Remote viewing tends to be more structured than other psi disciplines. In some important varieties of remote viewing, viewers follow specific scripted formats. These formats are designed to enhance the viewer's performance in various ways, such as to better deal with mental "noise" (stray thoughts, imaginings, analysis, etc. that degrades the "psychic signal") or to allow incoming data to be better managed. Some of these structural methodologies are widely used. Other methods are more personal. An individual remote viewer, for example, might through trial and error develop his or her own customized approach.

Proper remote viewing is done within a strict science-based protocol. As mentioned, the remote viewer is kept unwitting of either the nature or identity of the target until after the session is completed. Except in training situations, the monitor (a sort of remote viewing "guide" or facilitator that may assist the viewer during the session) is also unwitting, and external clues or data about the target are carefully excluded. Sessions are conducted in a setting that prevents knowledge of the target "leaking" to the viewer. These measures are important to insure that the viewer does not receive hints or clues about the target in any way other than what would be considered "psychic."

Remote viewing is not used to give "psychic readings," "tell fortunes," "read auras," or other sorts of popular activities of this nature, but is rather a means of doing serious science research and for performing operational-type tasks in criminal investigations, government intelligence work, commercial applications, etc. Many who want to explore their individual human potentials also become interested in it.

Finally, one last point related to structures or methods that are often employed in remote viewing: RV is not really a "psychic phenomenon" as such, but actually an imposed discipline or skill that helps the viewer to facilitate or "harness" his or her own innate, underlying psi abilities. Some RV theorists think that formal RV methods are really just strategies that help the viewer to more successfully and reliably access the subconscious, where it is most likely that information obtained from RV first emerges into human consciousness. 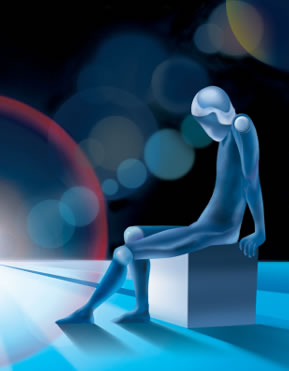 Remote viewing is a controlled and trainable mental process involving psi (or psychic ability). Remote-viewing procedures were originally developed in laboratories funded by the United States military and intelligence services and used for espionage purposes. The scientific understanding of the remote-viewing phenomenon has greatly advanced in recent years, and as a result the process of remote viewing can now be reliably demonstrated in both laboratory and operational settings. There are a number of styles of remote-viewing procedures that are popularly practiced, such as Scientific Remote Viewing (SRV), Controlled Remote Viewing (CRV), Hawaii Remote Viewers' Guild procedures (HRVG), as well as a few others. Remote viewers use one or more of these styles to gather descriptive data of a "target," which is usually some place or event at some point in time. Remote viewing is always done under blind conditions, which means that the remote viewer must know nothing about the target when conducting the remote-viewing session. All of the various styles of remote viewing require both training and regular practice in order for a remote viewer to become proficient. Remote viewing is normally considered a controlled shifting of awareness that is performed in the normal waking state of consciousness, and it does not typically involve an out-of-body experience, hypnosis, an altered state of consciousness, or channeling.

Remote viewing is often performed in laboratory experiments involving psi functioning. The targets used in such experiments are normally considered "verifiable," which means that everything that needs to be known about such targets either has been or can be determined so that the remote-viewing data can be compared with the target facts. A great deal of research is currently being done with regard to remote-viewing processes. Researchers are trying to understand the underlying mechanism of psi functioning, as well as to develop theories that explain various known and repeatable phenomena associated with remote viewing.

It is a matter of historical record that remote viewing has been used operationally in the past with considerable success by the U.S. government for espionage purposes, and a number of books recounting such programs have been published. There was even an official (and largely positive) evaluation of a significant part of the government's early remote-viewing program. Popular interest in remote viewing is often associated with this history. Current levels of governmental support for remote-viewing research and operations in the United States are not publicly known, although it is commonly assumed that efforts to utilize remote viewing for espionage purposes continues today, both in the U.S. and elsewhere.