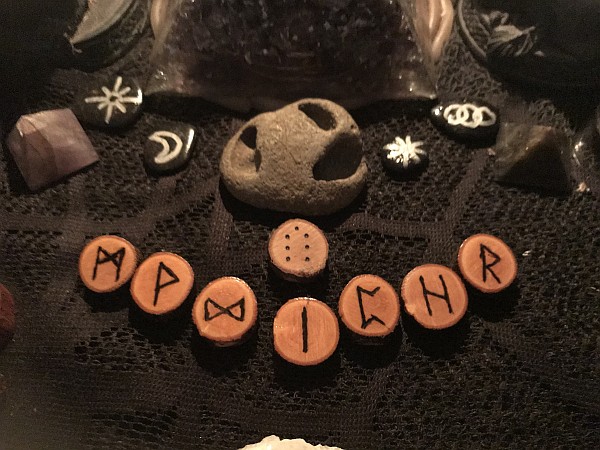 As a new week begins, let’s take a look at the upcoming influences. Cauda Draconis is the overall significator suggesting a week where a sense of completion is experienced. As always, I’m looking at each day’s numerology, Elder Futhark rune, and Moon information derived from both traditional astrology and Human Design’s use of the I Ching. The runes appear below.

Before looking at each day, I need to explain how I view the energy of Cauda Draconis and other so-called evil geomancy influences. Ancient geomancers regarded this rune along with Carcer and Rubeus as wholly evil influences and should they be drawn first in a reading, the geomancer is to end the divination and destroy everything used. A Fire element rune of both Saturn and Mars in Scorpio, one can easily understand their concern; however, I don’t share their viewpoint.

So, instead of destroying the reading, I would prefer to allow for the energy of completion this week, of letting go of that which no longer serves us in preparation for a greater sense of purpose perhaps. But let’s look at each day and then consider how Cauda Draconis, our significator, influences throughout the week.

Sunday has us seeking regeneration in the morning that allows us to shine later on in the afternoon. Chiron in the 4th House suggests childhood wounding may be in play during the morning. Retreat if necessary to seek inner healing and balance and avoid conflict early in the day to pave the way for a happier experience later.

Cauda Draconis may support the day’s nine numerology and the feeling that something may be coming to completion today paving the way for something new to begin, a new perspective or perhaps a new project. Be sure, however, to follow through on prior commitments. Allow Leo’s generous light to shine and be true to your word.

Isa’s eleven energy provides the underlying focus for today with its soul-level message of illumination. As a Norn rune representing the stillness within and a focus on the present moment, Isa is asking us to align in Source Presence and achieve a higher level of clarity. Isa’s presence may also indicate that an aligned focus is needed today, especially if new information becomes available and passions are high. The Moon square Mars today reinforces this and counsels patience and respect for the views of others.

Sowilo continues our soul-focus today with its own as above so below energy reinforcing polarity and balance offered by the day’s two numerology. An opposition between Mars and Uranus suggests a little too much resonance with conflict, so with self-confidence high today we should avoid any overreach which could interfere with a positive outcome. Virgo’s focus on details and routine may assist in containing Sowilo’s fiery influence.

With the three synchronicity between the day’s numerology and the rune Thurisazit’s tempting to suggest we have a convergence or clash between Hecate and Thor today. Although the Moon in Virgo suggests a focus on details, it also involves pettiness and judgment. Will we rationalize our experiences today and have much to balance in the evening when the Moon feels Libra’s effect? And which of the higher beings will influence our choice? Both Hecate and Thor favor truth and justice and the necessity to control the primal within and we would fare well to do the same.

We have a 22 numerology today, the Cosmic Builder, a Master number signaling Creator-level manifestation. Aligned with that Creator energy is Eihwaz, the link between Spirit and physical form, providing the route the cosmic manifestation energy travels. And under the guiding presence of the Moon in Libra, an additional soul-influenced experience involving the I Ching concept of the peacemaker suggests that a higher level of understanding allows for the dignity of all. All of this on Friday, a day for balance, harmony, and love. What will we co-create with others today?

Uruz watery effect aligns with Saturday’s five numerology of change achieving synchronicity from Friday’s Cosmic Builder energy as well. Perhaps what we began yesterday is finding its fulfillment today. Although we may feel like socializing with others today, Saturn’s square aspect with the Moon, although fairly weak, may foster the need to take an inner focus, particularly during the Moon’s transition between Libra and Scorpio when emotions may become somewhat unstable. Seek a still point and find clarity there.

Higher Self provides a strong influence throughout the week. In fact, there are so many examples of this, I’m going to list them for easier viewing.

The energy of Cauda Draconis, our geomancy significator for the week, suggests that we let go of issues from the past so that healing and transformation can take place. And we can see from the above list that an abundance of Higher Self support exists to help in that endeavor.

About Jan Erickson
Jan Erickson is an empath and a witch in her Crone years. She has a BA in Psychology, and facilitated her two sons' homeschooling efforts. Jan earned her Black Belt in Kenpo Karate in 1991, after which she taught along side her husband in their dojo. Herbalism has always been a part of Jan's life, and after suffering with rheumatoid arthritis for 13 years, she became a cannabis patient and healed. Living on the High Desert of Central Oregon with her husband of 40 years, Jan writes the blog, Stepping Aside, gardens, is a mom to bees and two sons, and continues to study herbs. And in July, 2017, Jan and her husband became grandparents!

We have 1645 guests and no members online