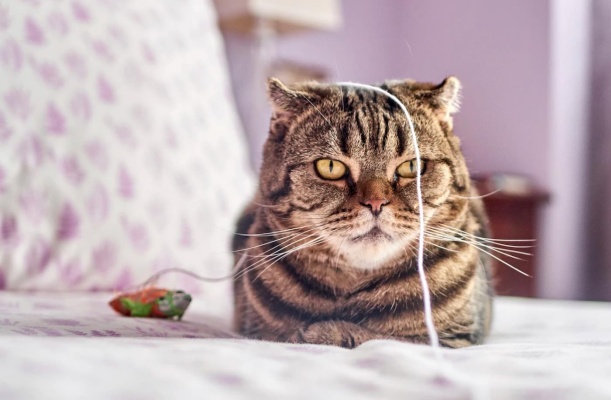 Domestication of animals was an amazing feat that changed human relationships with the natural world.

That’s because they domesticated themselves—not through form, but through function, and research reveals that wildcat ancestors share essentially the same genetics as house cats today.

It was the cat, itself, who came to prize the territory around the homes of the ancient farmer, or the wharf of the ancient mariner. They were drawn to a plentiful supply of prey in the form of rodents—which brought their species and ours to be inseparably linked.

A study from 2017 looked at the genetics of over 200 cats, from all five wild subspecies, along with cat remains from stone age Romania, and even Egyptian cat mummies, and found that f. lybica in the Near East in 4,400 BCE, and in North Africa around 1,500 BCE, gave rise to the domestic cat, likely because it was here where the earliest agricultural civilizations occurred.

Still, cats existed unchanged through thousands of years—essentially until the Middle Ages, before selective breeding, the typical activity of domestication, began to give rise to more unique types of cats.

“I think that there was no need to subject cats to such a selection process since it was not necessary to change them,” said evolutionary geneticist and study coauthor Eva-Maria Geigl to National Geographic. “They were perfect as they were.”

Rather than merging social hierarchies and breeding selectively like humans did with wolves—cats simply existed in close proximity to humans, without ever fully entering societal processes.

Rise of the Tabby

The first domestic cat genes the scientists identified were the blotch pattern on the tabby cat—the first truly domesticated, if such a word can be used, house cat.

Striped tabby cats were found in the European gene set of wildcats back before 6,500 BCE, and there they stayed for 3,000 years before emerging in the Near East genetic profile.

Tabby cats evolved their characteristic blotches in the Ottoman Empire in 1,300 CE, and it wasn’t until the 18th century that the tabby pattern began to be associated, societally, with domestication.

Not until the 19th century, thousands of years after dog diversification, did Europeans begin selecting certain characteristics to breed together in cats, resulting in the Russian Blue, perhaps around 1875, and the Maine Coon around the same time.

While not being truly domestic, cats are a celebrated part of our lives, and exist in 74 million homes in the United States alone. Their lack of selective breeding means that for the most part, genetic susceptibility to disease, typical of hyper-specialized dog breeds, is mostly absent in cats, and it’s not uncommon for them to live past 20 years old.

IF You’re Feline It, Paw This Fasinating Story Over to Friends…