Be Steady In Your Course - Women Are the Future of America 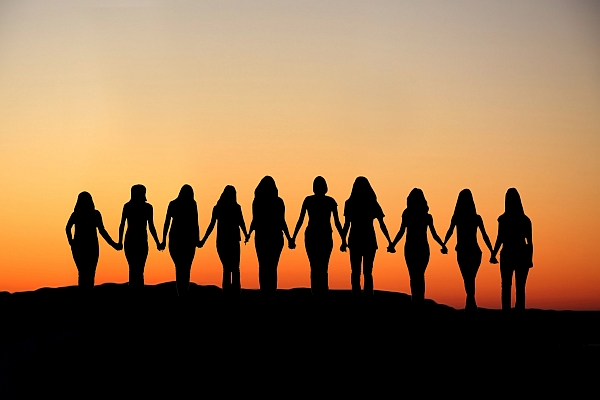 This is for all of you who are hanging in there despite the completely incomprehensible conditions happening in our world. Thank you for being courageous and persisting in doing what you must while being alert about how to consolidate those conditions which are currently stable.

Be steady in your course. We are in the thick of the swirl of Category 5 winds, and entering into the heart of the most destructive storms of our lifetimes. The conflicts are intense, because it is a fight for which structure will prevail in the new era. The intensity is whipping the world with intense friction in every possible direction.

When things are agitated, it is time to be as still as possible. When things spin out of control, the solution is not to fear, or clutch, but rather to maintain our inner equilibrium, a sense of perspective, and remember to keep our shields up when hostilites prevail and random invisible things which will kill us are deluging hundreds of millions.

There is a blue wave coming, regardless of the widespread cheating of those who would serve up our nation to authoritarian rule. The wave is the power of the good people in our society who want more people to have their legal right to vote. This is the tide of history. The people will prevail, and women are now an unstoppable political force reshaping our nation forever.

In the Summer of 2016 (after the second "debate" when the beast stalked Ms. Clinton all over the stage) I made a prediction on internet radio that women would become an unstoppable force in 2018, 2020, and 2022, so that by 2024's election women would make up at least 40% of Congress, and maybe even 45%. Of course that changes the agenda forever. Given what we saw in 2018 and what's likely to happen in 2020, we seem to be on track.

When the beast stalked her, my intuitive mechanism felt thousands of women become outraged that he would do that in front of the nation. In that moment he became every woman's abusive ex. I called the coming mobilization which eventuated in hundreds of women running in local, state, and national races in 2018, and yes, they flipped the House and a few state legislatures and increased the numbers significantly. Since then, even though the story isn't getting the traction it should, unless my numbers are wrong there are more hundreds running this year top to bottom. And with a strong woman at the top of the ticket, it will certainly affect countless down ballot races. A blue tsunami is coming soon!

So hold the course, steady and strong. The heart is a muscle which requires exercise from time to time. Use this time not to be stressed, but to be strong; not to be worried, but to learn and become clear about whatever calls your heart; not to be afraid of the unknown, but to use the time to rest, play, work, and learn, whatever you want, the best you are able.

The theme of group work dominates this year. We are building the personal and social structures which will expand in powerful ways in 2021. This time is providing us the opportunities to be strong, clear, steady, positive, and determined as we move the present into the future.

We have 1911 guests and no members online