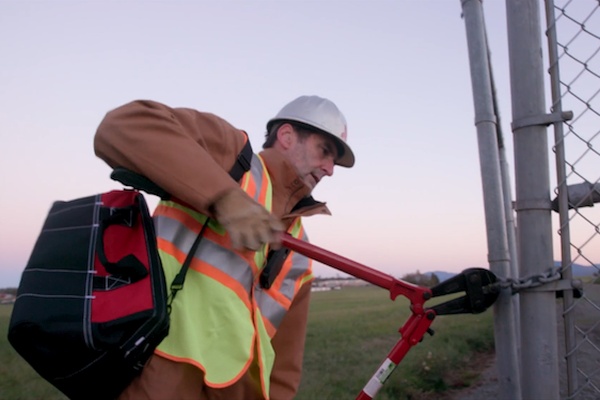 Image of Ken Ward in 2016 Valve-Turners action, from the film The Reluctant Radical.

It has been a year of terrible news and terrible realizations. A year of justifiable outrage and bewildered astonishment. A year of dashed hopes, false expectations and growing alarm and despair. A humbling year.

My response to being sad about all this is, as usual, to try to learn something new, and to recognize that offering us endless hope is just the establishment’s way of keeping us all in line.

That has me listening to some unusually bright, thoughtful, imaginative, realistic people — Zeynep Tüfekçi, Daniel Schmachtenberger, and Frédéric Laloux, among others. I’ll be writing more about some of Zeynep’s and Daniel’s fascinating ideas soon, but today, since I’m overdue for a “top 10” list, I thought I’d describe some of the interesting questions that came up in Frédéric’s most recent interview.

Frédéric is best known for his writings about self-managed organizations, but his many years studying such organizations have led to his asking questions that apply to what we do, individually and collectively, in our communities and in the world at large as well.

As I was listening to the questions he was posing, I began to realize that as recently as a decade ago, you would almost never hear these questions asked. It was, until very recently, considered bad form to ask a question without some sense of at least one “correct” answer at hand to answer it. And asking questions that acknowledged that there was likely no good answer at all was just unheard of, except among “doomers” (and, quietly, among the more knowledgeable climate scientists).

It was also very rare to hear questions asked that suggested that those with lots of experience, wealth, power and influence, and the capacity to deploy them, were just as racked with dismay, uncertainty and helplessness as the rest of us. Especially in business organizations, such acknowledgements were (and usually still are) considered a sign of weakness, rather than as a sign of maturity, candour, authenticity, curiosity and integrity.

Suddenly, quietly, it’s become OK to at least imply that “we’re fucked; so what do we do now?” It’s OK to say we don’t have all the answers, or that there are no answers. It’s OK to say most of what we’re struggling with are complex predicaments that can’t be even close to fully understood, controlled, or “fixed”, and that our best bet is to learn how to adapt to them as they play out. And it’s OK to be afraid, to be angry, and to be filled with grief. Frédéric says that over the past decades “social permissions” have changed to make these once-tacitly-taboo things OK.

Frédéric is now turning his attention from dysfunctional organizations to climate and ecological collapse. He’s discovering that these predicaments share a lot of the same attributes and symptoms, and the approaches to adapting to and coping with them are analogous. And he suggests that many of these approaches start with self-awareness and with cultivating and practicing excellent thinking, imaginative, attention and empathizing skills personally as a prelude to exercising these skills in group and collaborative work.

Although I’ve paraphrased them, here are ten “revolutionary” questions that Frédéric is now asking himself and others to consider in trying to deal with the terrible crises now facing us, and the growing likelihood of large-scale collapse. All of these questions apply at both a personal and societal level:

Asking these questions, first at a personal level, and then collectively, in our communities, in our workplaces, and as citizens of a world in collective peril: It’s a lot to ask!

We might well add an eleventh, meta-question: How can we learn to craft great questions? Great questions can help us, personally and collectively, engage in the conversations (the word conversation literally means “turning with”) needed to help the system (at whatever scale/scales possible) to self-correct. In other words, sometimes it’s enough just to ask the right question.

I confess I’m of two minds about all this. I find both subjects (facing collapse, and asking the right questions to prompt the best possible responses to deal with it) exciting, even exhilarating. But I also believe we have no free will. Our conditioning will dictate what each of us will do, individually and collectively, in the increasingly precarious circumstances that lie ahead.

We will ask, and attempt to address, important questions, or we won’t. We will act, or we won’t. Whatever we do, or don’t do, we will all be doing our best. That will either be enough to make a difference, or it won’t.

It’s out of our control, and has always been so. Fasten your seat belts; it’s getting bumpy.

We have 1854 guests and no members online