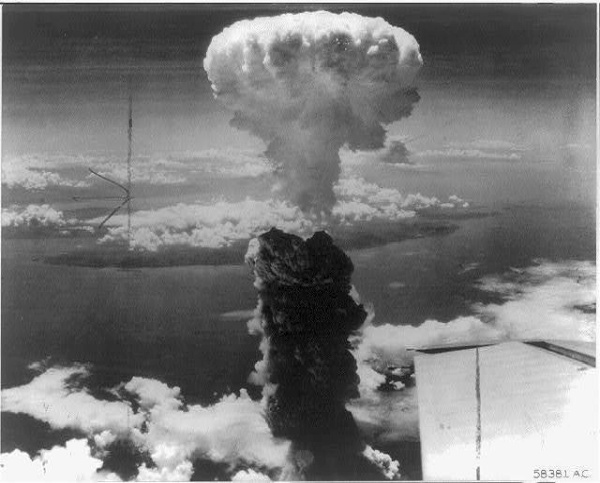 76 years ago the US ended a war through mass murder and unleashed a monstrous nuclear demon on our planet. Today we remember Nagasaki.

On August 9, 1945 the US dropped the second nuclear bomb in history. After Hiroshima, Truman made the decision to drop the second bomb on Nagasaki because Japan hadn’t surrendered, and he wanted to avoid the necessity of invading Japan. Another reason is the second bombing helped to test the Plutonium implosion bomb technology which was different than the Uranium “gun type” bomb they dropped on Hiroshima.

That of course was what made the Emperor choose to surrender, since he believed we were willing to annihilate the entire Japanese people, and he was right. We had several more Plutonium bombs being assembled for dropping over the next few weeks, and the destruction would have been hell on Earth. Japan would still be uninhabitable if we had dropped a few more.

So we definitely proved our point that the US would do anything to “win” WWII. As I noted in the Hiroshima article, while ending wars is always a good thing, that way of ending WWII unleashed the horror of the nuclear menace.

Once let out of its cage, the nuclear demon set off an arms race that came close to blowing up the planet during the Cold War. Most people do not know how close humanity came to total annihilation through psychopaths having access to nuclear arsenals and the political brinksmanship of “Mutually Assured Destruction.”

I cannot say that someone wouldn’t have come up with nuclear energy had the Nazis not done their experiments with heavy water, but I must reflect on the fact that nuclear weaponry was originally a Nazi concept. That would seem to make it a bad thing, regardless of whatever “good” may have come out of nuclear technology.

Anything that totalitarian cannot be a good thing for our fragile Earth and its creatures. Weapons of mass destruction are bad for all living things.

So today please take a moment to meditate on the 20-40,000 who died in an instant that day in Nagasaki, fried beyond comprehension by the most horrific force ever unleashed on humans by other humans. Almost as many died of radiation poisoning in the 4 months that followed. A miserable way to die, that type of inhumane insanity must never happen again.

I personally affirm that nuclear everything will be banished from this Earth forever as soon as possible, and that until that time, may there be no more nuclear energy spread anywhere on Earth by any means. No more nukes!

We have 2194 guests and no members online