We Are Not Alone - Message From The Arcturian Council of Twelve 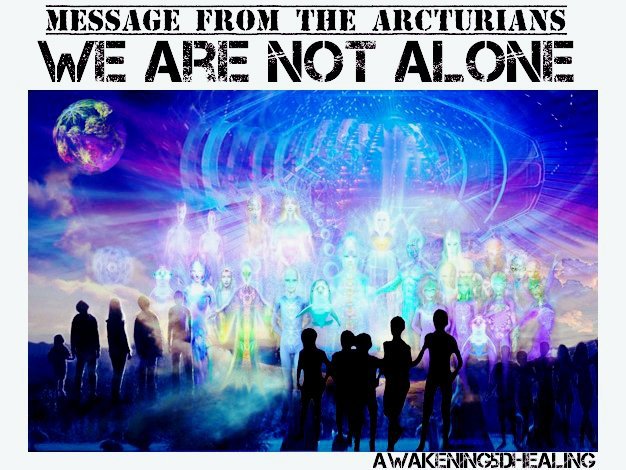 For a long time apathy, survival instincts and conformity algorithms have kept humanity looking down. You are now starting to look up, to see beyond the matrix holographic prison walls. This is the awakening. As light warriors here to assist Gaia and her people, you are embedded in the experience of being human. This entails an overactive ego, and a hostile environment. It is also exposure to and experience of, the vast spectrum of human emotions, rare in all the galaxies we know of. Being human is being susceptible to manipulation, deceit and destruction. It is also angelic. Humans are so called for their innate humility. A word undeniably absent when describing your world leaders. Yet it is truly apt to describe the vast numbers of humans experiencing growth, love, family, friendship and fulfilment of creative expression and passions. Many believe humanity is part seeded by the angelic beings who circle Gaia’s skies even now as we speak, monitoring and caring for their children on planet earth.

Humanity is, as you would say, a mongrel race, though not in terms of geography or colour or features. We refer to humanities rich and diverse seeding through the ages. Gaia is a jewel and like all jewels she sparks interest in those who will cherish her and those who will destroy her. Humanity, like children in the home, has been exposed to all these comings and goings, battles and strife. Some have intervened directly for good or bad, others indirectly influencing or halting the progress of the human race. This is not so rare in the known multi verse. Nor sadly is the situation with predators running wild like a virus on Gaia’s motherboard.

There is no easy or right way to break the news to the human race that the multiverse is no less complex or convoluted than the microcosm they inhabit. Technology is more advanced and much sickness and poverty related disease can be eradicated almost instantly. The third dimension allows for duality, it in some ways creates duality. This breeds war, hate, fear and greed. It attracts species who are driven by impulses for domination and power. Humanity has been caught in this cosmic crossfire for many many moons.

It would seem almost all of us who at some time have invested in Gaia and her people are here. We are all cheering you on. We do so want you to ascend as one. We accept there will be those who will not raise their frequencies to keep up with Gaia. We wait in wonder to see how Gaia, as an organic being herself, will deal with this. Will she separate and become two primaries, two Earths in the infinite world of quantum choice? Or will she stay as one? Will dimensional ascension allow for humanity to stay as they are? We, the Arcturian, Council of Twelve can see no reason why humans cannot retain their physical bodies, if their physical bodies have been sufficiently cleared of enough energetic toxins and blocks. This is humanities job in the ascension. To raise their individual frequencies so that as a collective the tipping point is reached and ascension occurs with Gaia.

Much has been done to limit, poison, delay and lockdown this evolutionary leap, yet many now believe the process has gone too far to be halted or stopped. Active intention towards nuclear war on planet earth would be halted instantly. There are any number of benevolent, technologically advanced beings watching over humanity that will deactivate warheads instantly. This can be done in many ways, and will be done. We feel that misinformation is being propagated to build fear of nuclear war. Within the heightened consciousness community this is triggering low vibration fear as many have loved ones who are not awake. We want to be clear, we and many others, invested in the wellbeing of Gaia and humanity, have the ability and the technology to deactivate nuclear war heads. In fact this type of intervention has already occurred several times since 1945.

We are aware that humanities free will and Gaia’s free will have been compromised by malignant beings with destructive intentions. The universal right to step in and prevent further fullscale destruction has been unanimously authorised for many human years. We see this as the red line that cannot be crossed. However in an ongoing commitment to earth’s free will, discussed in many intergalactic federation meetings, we are in agreement that the less direct intervention we have the better. That is to say we must, like parents, sit back and watch you make some mistakes in the hope you learn from them, authentically.

We recognise that humans would perceive parental love in these decisions, and this is true. We have seeded and are integral to humanities development. However unlike humans, this process has passed over many thousands of years, if not millennia. We travel and we explore our consciousness and the cosmos. This event, this Shift, has drawn a crowd, a very unusual event and one that has been spoken of in many, many different languages and worlds far, far from this little corner of the galaxy. Your neighbouring galaxy Andromeda is connected and highly advanced, it’s many civilisations having explored the far reaches of the multi verse and come back to tell the tale.

There is so much humanity does not know and will know very soon. We are excited and enthusiastic to welcome Gaia and her people through the gates of the fifth dimension and beyond. To vast, inspiring and ever evolving spaces on the dimensionality frequency spectrum. We hope to imbue you with enlightenment, reassurance and hope for a better, far more exciting and creative future than the holographic third dimension universe you perceive, would have you believe. We thank Morag, and those like her, who are striving to manage their third dimension existence with this, their fifth dimension existence. Humanity is learning to walk and talk quantum in a truly profound way, merging multi dimensionality experiences into the one moment. We are grateful to all truth seekers, way show-ers and warriors of Gaia. We wish you all love, peace and joy.

The Arcturian Council of Twelve.